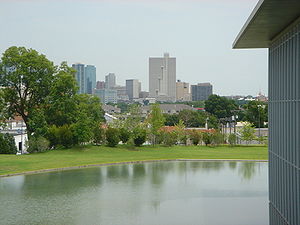 The Modern Art Museum of Fort Worth (widely referred to as The Modern) was first granted a Charter from the State of Texas in 1892 as the "Fort Worth Public Library and Art Gallery", evolving through several name changes and different facilities in Fort Worth. The mission of the museum is "collecting, presenting and interpreting international developments in post-World War II art in all media."

The current building, designed by Japanese architect Tadao Ando
Tadao Ando
is a Japanese architect whose approach to architecture was once categorized by Francesco Dal Co as critical regionalism. Ando has led a storied life, working as a truck driver and boxer prior to settling on the profession of architecture, despite never having taken formal training in the field...
was opened to the public on Saturday, December 14, 2002. The "Modern" is located in the city's Cultural District, adjacent to the Kimbell Art Museum
Kimbell Art Museum
The Kimbell Art Museum in Fort Worth, Texas, hosts a small but excellent art collection as well as traveling art exhibitions, educational programs and an extensive research library. Its initial artwork came from the private collection of Kay and Velma Kimbell, who also provided funds for a new...
, designed by Louis I. Kahn, and near the Amon Carter Museum
Amon Carter Museum
The Amon Carter Museum of American Art is located in Fort Worth, Texas. It was established by Amon G. Carter to house his collection of paintings and sculpture by Frederic Remington and Charles M. Russell. Carter’s will provided a museum in Fort Worth devoted to American art.When the museum opened...
, designed by Philip Johnson
Philip Johnson
Philip Cortelyou Johnson was an influential American architect.In 1930, he founded the Department of Architecture and Design at the Museum of Modern Art in New York City, and later , as a trustee, he was awarded an American Institute of Architects Gold Medal and the first Pritzker Architecture...
. The building features five long, pavilions set into a reflecting pond. The structural engineering was provided by Thornton Tomasetti
Thornton Tomasetti
Thornton Tomasetti is a 550+ person structural engineering consulting firm headquartered in New York City...
.

The Museum currently contains over 2,600 works of art in its 53000 square feet (4,923.9 m²) of gallery space, putting it at the forefront of post World War II art collections in the central United States. The Permanent Collection includes more than 3,000 works including pieces by Pablo Picasso
Pablo Picasso
Pablo Diego José Francisco de Paula Juan Nepomuceno María de los Remedios Cipriano de la Santísima Trinidad Ruiz y Picasso known as Pablo Ruiz Picasso was a Spanish expatriate painter, sculptor, printmaker, ceramicist, and stage designer, one of the greatest and most influential artists of the...
, Anselm Kiefer
Anselm Kiefer
Anselm Kiefer is a German painter and sculptor. He studied with Joseph Beuys and Peter Dreher during the 1970s. His works incorporate materials such as straw, ash, clay, lead, and shellac...
, Robert Motherwell
Robert Motherwell
Robert Motherwell American painter, printmaker and editor. He was one of the youngest of the New York School , which also included Jackson Pollock, Mark Rothko, Willem de Kooning, and Philip Guston....
, Susan Rothenberg
Susan Rothenberg
Susan Rothenberg is a contemporary painter who lives and works in New Mexico, USA.-Background:Rothenberg was born in Buffalo, New York, in 1945...
, Jackson Pollock
Jackson Pollock
Paul Jackson Pollock , known as Jackson Pollock, was an influential American painter and a major figure in the abstract expressionist movement. During his lifetime, Pollock enjoyed considerable fame and notoriety. He was regarded as a mostly reclusive artist. He had a volatile personality, and...
, Gerhard Richter
Gerhard Richter
Gerhard Richter is a German visual artist. Richter has simultaneously produced abstract and photorealistic painted works, as well as photographs and glass pieces, thus undermining the concept of the artist’s obligation to maintain a single cohesive style.- Biography :Gerhard Richter was born in...
, Richard Serra
Richard Serra
Richard Serra is an American minimalist sculptor and video artist known for working with large-scale assemblies of sheet metal. Serra was involved in the Process Art Movement.-Early life and education:...
, Andres Serrano
Andres Serrano
Andres Serrano is an American photographer and artist who has become notorious through his photos of corpses and his use of feces and bodily fluids in his work, notably his controversial work "Piss Christ", a red-tinged photograph of a crucifix submerged in a glass container of what was purported...
, Cindy Sherman
Cindy Sherman
Cindy Sherman is an American photographer and film director, best known for her conceptual portraits. Sherman currently lives and works in New York City. In 1995, she was the recipient of a MacArthur Fellowship. She is represented by Sprüth Magers Berlin London in and Metro Pictures gallery in...
, and Andy Warhol
Andy Warhol
Andrew Warhola , known as Andy Warhol, was an American painter, printmaker, and filmmaker who was a leading figure in the visual art movement known as pop art...
.