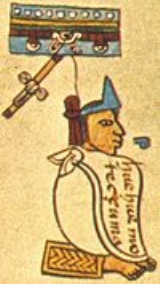 Moctezuma was the son of emperor Huitzilihuitl
Huitzilíhuitl
Huitzilihuitl was the second tlatoani of Tenochtitlan, governing from 1396 to 1417, .- Family and childhood :...
and queen Miahuaxihuitl
Miahuaxihuitl
Miahuaxihuitl of Cuauhnahuac was a Queen of Tenochtitlan. Her name is also spelled as Miyahuaxihuitl. She was an aunt of the Queen Chichimecacihuatzin I and sister of the king Cuauhtototzin.- Biography :...
. He was a brother of Chimalpopoca
Chimalpopoca
Chimalpopoca was the third king of Tenochtitlan .-Rule:On the day of Chimalpopoca's coronation in 1417 , his brother Tlacaelel I was named high priest...
, Tlacaelel I and Huehue Zaca
Huehue Zaca
Huehue Zaca or Çaca , also Zacatzin , was a 15th century Aztec noble, prince and a warrior who served as tlacateccatl under the ruler Moctezuma I, his brother. The name of Zaca is probably derived from Nahuatl zacatl, meaning "grass"; -tzin is an honorific or reverential suffix...
. Moctezuma executed Zaca for singing and beating his drum loudly.

According to legend, Miahuaxihuitl miraculously became pregnant with Moctezuma after swallowing a jewel. This may be the origin of the name Ilhuicamina. Moctezuma later married Chichimecacihuatzin I
Chichimecacihuatzin I
-Family:She was a daughter of the king Cuauhtototzin, granddaughter of the king Tezcacohuatzin, niece of the Queen Miahuaxihuitl and cousin-wife of Emperor Moctezuma I. She had at least one child with him, Princess Atotoztli II...
, his mother's niece.

Tlacaelel held the position of cihuacoatl
Cihuacoatl (position)
The cihuacoatl was a supreme leader or advisor within the Aztec system of government....
- "First councillor" during Moctezuma's reign and some sources ascribe a lot of the success of Moctezuma to Tlacaelel, but this may be a postconquest invention (Gillespie 1989:132).

Moctezuma took power in 1441, after the death of his half-uncle Itzcoatl
Itzcóatl
Itzcoatl was the fourth emperor of the Aztecs, ruling from 1427 to 1440, the period when the Mexica threw off the domination of the Tepanecs and laid the foundations for the eventual Aztec Empire.- Biography :...
. As tlatoani, Moctezuma solidified the alliance with two neighboring peoples, Tlacopan
Tlacopan
Tlacopan , also called Tacuba, was a Pre-Columbian Mesoamerican city-state situated on the western shore of Lake Texcoco.Founded by Tlacomatzin, Tlacopan was a Tepanec kingdom subordinate to nearby Azcapotzalco...
(a small city-state) and Texcoco. In this skillfully crafted Triple Alliance
Aztec Triple Alliance
The Aztec Triple Alliance, or Aztec Empire began as an alliance of three Nahua city-states or "altepeme": Tenochtitlan, Texcoco, and Tlacopan...
, 4/5ths of a newly conquered territory would be divided between Texcoco and the Aztecs, with the remaining 1/5 given to Tlacopan.

Moctezuma extended the boundaries of the Aztec empire beyond the Valley of México to the Gulf
Gulf of Mexico
The Gulf of Mexico is a partially landlocked ocean basin largely surrounded by the North American continent and the island of Cuba. It is bounded on the northeast, north and northwest by the Gulf Coast of the United States, on the southwest and south by Mexico, and on the southeast by Cuba. In...
Coast, subjugating the Huastec people and Totonac
Totonac
The Totonac people resided in the eastern coastal and mountainous regions of Mexico at the time of the Spanish arrival in 1519. Today they reside in the states of Veracruz, Puebla, and Hidalgo. They are one of the possible builders of the Pre-Columbian city of El Tajín, and further maintained...
peoples and thereby gaining access to exotic goods such as cocoa, rubber, cotton, fruits, feathers, and seashells.

About 1458, Moctezuma led an expedition into Mixtec
Mixtec
The Mixtec are indigenous Mesoamerican peoples inhabiting the Mexican states of Oaxaca, Guerrero and Puebla in a region known as La Mixteca. The Mixtecan languages form an important branch of the Otomanguean language family....
territory against the city-state of Coixtlahuaca, the pretext being the mistreatment of Aztec merchants. Despite the support of contingents of Tlaxcala
Tlaxcala (Nahua state)
Tlaxcala was a pre-Columbian city state of central Mexico.Tlaxcala was a confederation of four altepetl — Ocotelolco, Quiahuiztlan, Tepeticpac and Tizatlan — which each took turns providing a ruler for Tlaxcala as a whole.-History:Tlaxcala was never conquered by the Aztec empire, but was...
and Huexotzingo warriors, traditional enemies of the Aztecs, the Mixtecs were defeated. While most of the defeated chieftains were allowed to retain their positions, the Mixtec ruler Atonal was ritually strangled and his family was taken as slaves. The Codex Mendoza
Codex Mendoza
The Codex Mendoza is an Aztec codex, created about twenty years after the Spanish conquest of Mexico with the intent that it be seen by Charles V, the Holy Roman Emperor and King of Spain...
records that the tribute owed by Coixtlahuaca consisted of 2000 blankets (of 5 types), 2 military outfits with headresses and shields, green gemstone beads, 800 bunches of green feathers, 40 bags of cochineal dye, and 20 bowls of gold dust.

Similar campaigns were conducted against Cosamaloapan
Cosamaloapan
Cosamaloapan is a municipality located in the plains of the Sotavento zone in the central zone of the State of Veracruz, about 240 km from state capital Xalapa. It has a surface of 323.26 km2. It is located at ....
, Ahuilizapan (Orizaba
Orizaba
Orizaba is a city and municipality in the Mexican state of Veracruz. It is located 20 km west of its sister city Córdoba, and is adjacent to Río Blanco and Ixtaczoquitlán, on Federal Highways 180 and 190. The city had a 2005 census population of 117,273 and is almost coextensive with its small...
), and Cuetlachtlan (Cotaxtla
Cotaxtla
Cotaxtla is a city in the Mexican state of Veracruz.It is located 45 km from the city of Veracruz on Federal Highway 180. Major products in Cotaxtla are corn, sugar, and fruits....
). 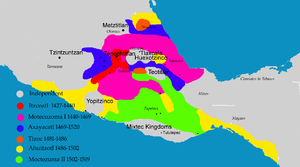