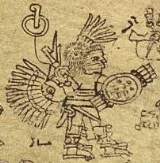 Encyclopedia
Chimalpopoca (1397–1427) was the third king
Tlatoani
Tlatoani is the Nahuatl term for the ruler of an altepetl, a pre-Hispanic state. The word literally means "speaker", but may be translated into English as "king". A is a female ruler, or queen regnant....
of Tenochtitlan (1417–1427).

On the day of Chimalpopoca's coronation in 1417 (some sources say 1416 or 1418), his brother Tlacaelel I was named high priest. From this point on the ecclesiastical and governmental offices among the Aztecs were separate.

When he assumed the throne at age 20, Tenochtitlan was a tributary of the Tepanec
Tepanec
The Tepanecs or Tepaneca are a Mesoamerican people who arrived in the Valley of Mexico in the late 12th or early 13th centuries. The Tepanec were a sister culture of the Aztecs as well as the Acolhua and others—these tribes spoke the Nahuatl language and shared the same general pantheon, with...
city of Azcapotzalco
Azcapotzalco (altepetl)
Azcapotzalco was a pre-Columbian Nahua altepetl , capital of the Tepanec empire, in the Valley of Mexico, on the western shore of Lake Texcoco.The name Azcapotzalco means "at the anthill" in Nahuatl...
, which was ruled by his grandfather Tezozomoc. This alliance, and the Mexicas' position within it, was strengthened by Tenochtitlan's loyalty during Tezozomoc's 1418 war with Ixtlilxochitl I
Ixtlilxochitl I
Ixtlilxochitl Ome Tochtli was the ruler of the Acolhua city-state of Texcoco from 1409 to 1418 and the father of the famous "poet-king" Nezahualcoyotl.-Early years as tlatoani:...
of Texcoco. The conquered city was granted to Tenochtitlan as a tributary.

In 1426 Tezozómoc assisted Chimalpopoca in the construction of a new aqueduct. This aqueduct was of wood, and ran from the elevated place of Chapultepec
Chapultepec
Chapultepec Park, more commonly called the "Bosque de Chapultepec" in Mexico City, is the largest city park in Latin America, measuring in total just over 686 hectares. Centered on a rock formation called Chapultepec Hill, one of the park's main functions is to be an ecological space in the vast...
to Tenochtitlan.

Chimalpopoca also had a causeway constructed to Tlacopan
Tlacopan
Tlacopan , also called Tacuba, was a Pre-Columbian Mesoamerican city-state situated on the western shore of Lake Texcoco.Founded by Tlacomatzin, Tlacopan was a Tepanec kingdom subordinate to nearby Azcapotzalco...
. The causeway contained openings spanned by wooden bridges, which were removed at night. Also during his reign he dedicated a stone for sacrifices in the Tlacocomoco section of Tenochtitlan. To him is attributed the conquest of Tequizquiac. 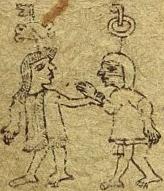 Chimalpopoca was the son of Huitzilihuitl
Huitzilíhuitl
Huitzilihuitl was the second tlatoani of Tenochtitlan, governing from 1396 to 1417, .- Family and childhood :...
, the previous ruler, but there are some sources that say he was a son of Acamapichtli
Acamapichtli
Acamapichtli was the first tlatoani, or ruler, of the Aztecs of Tenochtitlan, and founder of the Aztec imperial dynasty. He became ruler in 1375 and reigned for 19 years.- Family and early life :...
, the first ruler of Tenochtitlan, making him Huitzilihuitl's brother. Gerónimo de Mendieta
Gerónimo de Mendieta
Fray Gerónimo de Mendieta , alternatively Jerónimo de Mendieta, was a Franciscan missionary and historian, who spent most of his life in the Spanish Empire's new possessions in Mexico and Central America....
, in his Historia eclesiástica indiana, notes the discrepancy and concludes that Huitzilihuitl, Chimalpopoca and Itzcoatl
Itzcóatl
Itzcoatl was the fourth emperor of the Aztecs, ruling from 1427 to 1440, the period when the Mexica threw off the domination of the Tepanecs and laid the foundations for the eventual Aztec Empire.- Biography :...
(Chimalpopoca's successor) must have been brothers, based on his understanding on the Aztec system of succession
Order of succession
An order of succession is a formula or algorithm that determines who inherits an office upon the death, resignation, or removal of its current occupant.-Monarchies and nobility:...
.

Three versions of the family tree of the first Aztec rulers:

When Tezozomoc died in 1427 after a long reign, he was succeeded by his son Tayatzin. However Maxtla
Maxtla
Maxtla was a Tepanec ruler of Azcapotzalco from 1426 to his death in 1428. He succeeded his father Tezozomoc, possibly through assassination of his elder brother Tayauh. His reign saw a rapid decline in the fortunes of Azcapotzalco...
, ruler of Coyoacán
Coyoacán
Coyoacán refers to one of the sixteen boroughs of the Federal District of Mexico City as well as the former village which is now the borough’s “historic center.” The name comes from Nahuatl and most likely means “place of coyotes,” when the Aztecs named a pre-Hispanic village on the southern shore...
and older half-brother of Tayatzin, soon incited a rebellion among the nobles of Azcapotzalco and usurped the throne. Chimalpopoca allied with Tayatzin, and the two conspired to retake the throne and kill Maxtla. Friendly relations between Tenochtitlan and Azcapotzalco were thus replaced by insults and violent intrigue, apparently involving tit-for-tat assassination attempts. Maxtla sent Chimalpopoca a present of women's clothing.

Teyatzin was killed, and Chimalpopoca decided to offer himself as a sacrifice at the altar of his father Huitzilíhuitl. Some of his nobles joined him. In the middle of the ceremony, before the tlatoanis turn, an expeditionary force from Azcapotzalco invaded Tenochtitlan, took Chimalpopoca prisoner and carried him to Azcapotzalco. There he was exhibited in a cage and kept on starvation rations. He committed suicide, hanging himself from a beam with his belt. (Another account says he was strangled by his captors.)

He was succeeded as tlatoani by his uncle Itzcoatl
Itzcóatl
Itzcoatl was the fourth emperor of the Aztecs, ruling from 1427 to 1440, the period when the Mexica threw off the domination of the Tepanecs and laid the foundations for the eventual Aztec Empire.- Biography :...
.