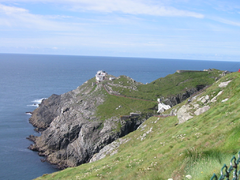 Mizen Head is located at the extremity of a peninsula in the district of Carbery in County Cork
County Cork
County Cork is a county in Ireland. It is located in the South-West Region and is also part of the province of Munster. It is named after the city of Cork . Cork County Council is the local authority for the county...
, Ireland
Ireland
Ireland is an island to the northwest of continental Europe. It is the third-largest island in Europe and the twentieth-largest island on Earth...
. It is one of the extreme points of the island of Ireland
Extreme points of Ireland
This is a list of the extreme points of Ireland – the points that are farthest north, south, east or west. It includes the Republic of Ireland and Northern Ireland.Often the term "Malin to Mizen" is used when encompassing the entire island from north to south...
and is a major tourist attraction, noted for its dramatic cliff scenery. The tip of the peninsula is an island formed by a deep chasm, now spanned by a bridge; this gives access to an old signalling station, a weather station
Weather station
A weather station is a facility, either on land or sea, with instruments and equipment for observing atmospheric conditions to provide information for weather forecasts and to study the weather and climate. The measurements taken include temperature, barometric pressure, humidity, wind speed, wind...
, and a lighthouse
Lighthouse
A lighthouse is a tower, building, or other type of structure designed to emit light from a system of lamps and lenses or, in older times, from a fire, and used as an aid to navigation for maritime pilots at sea or on inland waterways....
. The signalling station, once permanently manned, is now a museum housing displays relating to the site's strategic significance for transatlantic shipping and communications. The "99 steps" which formed part of the original access route have been supplemented by a series of paths and viewing platforms, and a full range of visitor facilities is available at the entrance to the site. The villages of Ballydehob
Ballydehob
Ballydehob is a coastal village in the southwest of County Cork, Ireland, located on the N71 national secondary road.-History:Ballydehob is a microcosm of Irish local history, and legends and folklore abound in the locality. At the dawn of the Bronze Age , copper was mined on Mount Gabriel, just...
, Crookhaven
Crookhaven
Crookhaven is a village in County Cork, Ireland, on the most southwestern tip of Ireland. A winter population of about forty swells in the summer to about four hundred with the occupants of the many holiday homes arriving.-History:...
, Goleen
Goleen
Goleen is a small rural village in County Cork on the south-western tip of Ireland. Farming and construction work are the main occupations of the local people. Many are involved with some aspect of the tourist business, looking after some of the many holiday homes which surround the village...
, and Schull
Schull
Schull or Skull is a town in County Cork, Ireland. The name derives from a medieval monastic school of which no trace remains. Located on the southwest coast, in West Cork, the village is situated in a scenic and remote location, dominated by Mount Gabriel . It has a sheltered harbour, used for...
are located on the peninsula to the east.

Contrary to popular belief, Mizen Head is not the most southerly point on the mainland of Ireland - nearby Brow Head
Brow Head
Brow Head is the most southerly point of mainland Ireland. It is situated 3.8 km east of the marginally more northerly Mizen Head, County Cork, Ireland. It lies at latitude 51.43ºN....
holds that title. Nevertheless, geography books have long measured the length of Ireland "from Fair Head
Fair Head
Fair Head is a rocky headland at the north-eastern corner of Northern Ireland, in County Antrim. It lies 3 miles east of Ballycastle town, and is the closest part of the mainland to Rathlin Island...
to Mizen Head" or "from Malin Head
Malin Head
Malin Head , on the Inishowen Peninsula, County Donegal, is usually given as the most northerly headland of the mainland of Ireland . In fact, the most northerly point is actually a headland named Banba's Crown on the Inishowen Peninsula about 2 km to the northeast...
to Mizen Head.