Encyclopedia
The Mir yeshiva known as the Mirrer Yeshiva or The Mir, is an Orthodox
Orthodox Judaism
Orthodox Judaism , is the approach to Judaism which adheres to the traditional interpretation and application of the laws and ethics of the Torah as legislated in the Talmudic texts by the Sanhedrin and subsequently developed and applied by the later authorities known as the Gaonim, Rishonim, and...
Jewish
Jews
The Jews , also known as the Jewish people, are a nation and ethnoreligious group originating in the Israelites or Hebrews of the Ancient Near East. The Jewish ethnicity, nationality, and religion are strongly interrelated, as Judaism is the traditional faith of the Jewish nation...
yeshiva
Yeshiva
Yeshiva is a Jewish educational institution that focuses on the study of traditional religious texts, primarily the Talmud and Torah study. Study is usually done through daily shiurim and in study pairs called chavrutas...
in Jerusalem, Israel
Israel
The State of Israel is a parliamentary republic located in the Middle East, along the eastern shore of the Mediterranean Sea...
. With 6,000 students, it is the largest yeshiva in Israel. Many of the students are from the United States and Canada. It is also believed to be the largest yeshiva in the world. Rabbi Nosson Tzvi Finkel
Nosson Tzvi Finkel (Mir)
Nosson Tzvi Finkel was an American-born Haredi Litvish rabbi and rosh yeshiva of the Mir Yeshiva in Jerusalem, Israel. During his tenure from 1990 until his death in 2011, he built the Mir into the largest yeshiva in Israel with nearly 6,000 undergraduate students and over 1,600 avreichim...
was the rosh yeshiva
Rosh yeshiva
Rosh yeshiva, , , is the title given to the dean of a Talmudical academy . It is made up of the Hebrew words rosh — meaning head, and yeshiva — a school of religious Jewish education...
of the yeshiva in Jerusalem until his death on November 8, 2011. He is succeeded by his son, Rabbi Eliezer Yehuda Finkel
Eliezer Yehuda Finkel (II)
Eliezer Yehuda Finkel is a Haredi Jewish rabbi and rosh yeshiva of the Mir Yeshiva in Jerusalem, which is considered to be the largest yeshiva in Israel with a student body of 6,000 students...
. 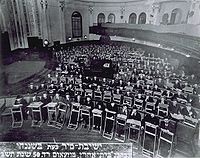 The original Mirrer yeshiva was founded in 1814 by Rabbi Shmuel Tiktinsky in the small Polish town of Mir, Belarus
Mir, Belarus
Mir is an urban settlement in Kareličy raion, Hrodna Voblast, Belarus on the banks of Miranka River, about 85 kilometers southwest of the national capital, Minsk....
. After his death, his youngest son, Chaim Leib Tiktinsky, was appointed rosh yeshiva
Rosh yeshiva
Rosh yeshiva, , , is the title given to the dean of a Talmudical academy . It is made up of the Hebrew words rosh — meaning head, and yeshiva — a school of religious Jewish education...
. He was succeeded by his son, Avrohom Tiktinsky, who brought Rabbi Eliyahu Boruch Kamai into the yeshiva. In 1903, Rabbi Kamai's daughter married Rabbi Eliezer Yehuda Finkel (Reb Leizer Yudel), son of Rabbi Nosson Tzvi Finkel, who in time became the rosh yeshiva of the Mir. The yeshiva remained in that location until 1914.

With the outbreak of World War I
World War I
World War I , which was predominantly called the World War or the Great War from its occurrence until 1939, and the First World War or World War I thereafter, was a major war centred in Europe that began on 28 July 1914 and lasted until 11 November 1918...
, the yeshiva moved to Poltava
Poltava
Poltava is a city in located on the Vorskla River in central Ukraine. It is the administrative center of the Poltava Oblast , as well as the surrounding Poltava Raion of the oblast. Poltava's estimated population is 298,652 ....
, Ukraine
Ukraine
Ukraine is a country in Eastern Europe. It has an area of 603,628 km², making it the second largest contiguous country on the European continent, after Russia...
. In 1921, the yeshiva moved back to its original facilities in Mir, where it remained until Nazi Germany
Nazi Germany
Nazi Germany , also known as the Third Reich , but officially called German Reich from 1933 to 1943 and Greater German Reich from 26 June 1943 onward, is the name commonly used to refer to the state of Germany from 1933 to 1945, when it was a totalitarian dictatorship ruled by...
invaded Poland
Invasion of Poland (1939)
The Invasion of Poland, also known as the September Campaign or 1939 Defensive War in Poland and the Poland Campaign in Germany, was an invasion of Poland by Germany, the Soviet Union, and a small Slovak contingent that marked the start of World War II in Europe...
in 1939 marking the beginning of the Holocaust.

Although many of the foreign-born students left when the Soviet
Soviet Union
The Soviet Union , officially the Union of Soviet Socialist Republics , was a constitutionally socialist state that existed in Eurasia between 1922 and 1991....
army invaded from the east, the yeshiva continued to operate, albeit on a reduced scale, until the approaching Nazi
Nazi Germany
Nazi Germany , also known as the Third Reich , but officially called German Reich from 1933 to 1943 and Greater German Reich from 26 June 1943 onward, is the name commonly used to refer to the state of Germany from 1933 to 1945, when it was a totalitarian dictatorship ruled by...
armies caused the leaders of the yeshiva to move the entire yeshiva community to Keidan
Kedainiai
Kėdainiai is one of the oldest cities in Lithuania. It is located on the Nevėžis River. First mentioned in the 1372 Livonian Chronicle of Hermann de Wartberge, its population as of 2008 was 30,214. Its old town dates to the 17th century....
, Lithuania
Lithuania
Lithuania , officially the Republic of Lithuania is a country in Northern Europe, the biggest of the three Baltic states. It is situated along the southeastern shore of the Baltic Sea, whereby to the west lie Sweden and Denmark...
.

Around this time, Rabbi Eliezer Yehuda Finkel traveled to Palestine to obtain visas for his students and reestablish the yeshiva in Eretz Yisrael, but these plans were interrupted by the outbreak of World War II
World War II
World War II, or the Second World War , was a global conflict lasting from 1939 to 1945, involving most of the world's nations—including all of the great powers—eventually forming two opposing military alliances: the Allies and the Axis...
. In 1944, Rabbi Finkel opened a branch of the yeshiva in Jerusalem with ten students, among them Rabbi Yudel Shapiro (later Rosh Kollel Chazon Ish), Rabbi Chaim Brim (later rosh yeshiva of Rizhn-Boyan, and Rabbi Chaim Greineman..

As the Nazi armies continued to push to the east, the yeshiva students fled to (Japanese-controlled) Shanghai
Shanghai
Shanghai is the largest city by population in China and the largest city proper in the world. It is one of the four province-level municipalities in the People's Republic of China, with a total population of over 23 million as of 2010...
, China
China
Chinese civilization may refer to:* China for more general discussion of the country.* Chinese culture* Greater China, the transnational community of ethnic Chinese.* History of China* Sinosphere, the area historically affected by Chinese culture...
, where they remained until the end of the war.

There are many different shiurim for a student to choose from in the yeshiva. Currently, Rabbi Asher Arieli
Asher Arieli
Asher Arieli is a senior lecturer at Yeshivas Mir. He is globally renowned for his lectures and is widely recognized as a Gadol in his own right. He presently delivers the largest Talmudic lecture by attendance in the world with approximately 600 daily attendees. His shiur starts at aprox...
, who gives shiurim in Yiddish
Yiddish language
Yiddish is a High German language of Ashkenazi Jewish origin, spoken throughout the world. It developed as a fusion of German dialects with Hebrew, Aramaic, Slavic languages and traces of Romance languages...
, has approximately 600 students in his shiur, making it the biggest daily shiur in the world.

The yeshiva has a branch in Modi'in Illit
Modi'in Illit
Modi'in Illit is a Haredi Israeli settlement and a city in the West Bank, situated midway between Jerusalem and Tel Aviv. Modi'in Illit was granted city status by the Israeli government in 2008. It is located six kilometres northeast of Modi'in-Maccabim-Re'ut and is often referred to as Kiryat...
primarily for Israelis, which also includes a kollel
Kollel
A kollel is an institute for full-time, advanced study of the Talmud and rabbinic literature. Like a yeshiva, a kollel features shiurim and learning sedarim ; unlike a yeshiva, the student body of a kollel are all married men...
. Mir Brachfeld is headed by Rabbi Aryeh Finkel
Aryeh Finkel
Aryeh Finkel is a Haredi rabbi and rosh yeshiva of the Brachfeld branch of the Mir yeshiva. Before assuming his post at the new yeshiva branch in 2005, he served as the mashgiach at the Mir in Jerusalem for many decades.-Biography:...
, a grandson of Rabbi Eliezer Yehuda Finkel.