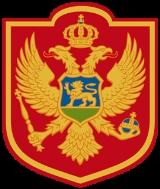 Montenegro is a member of NATO's Partnership for Peace
Partnership for Peace
Partnership for Peace is a North Atlantic Treaty Organisation program aimed at creating trust between NATO and other states in Europe and the former Soviet Union; 22 States are members...
program and is an official candidate
Accession of Montenegro to NATO
The accession of Montenegro to NATO is in the negotiations stage as of 2010. In December 2009, Montenegro was granted a Membership Action Plan, the final step in an application for membership in the organization...
for full membership in the alliance. Montenegro applied for a Membership Action Plan on 5 November 2008, which was granted in December 2009. Montenegro is also a member of Adriatic Charter
Adriatic Charter
The Adriatic Charter is an association formed by Albania, Croatia, Republic of Macedonia and United States of America for the purpose of aiding their attempts to join NATO. The Charter was signed on 2 May 2003 in Tirana under the aegis of USA...
.

Montenegro participates in peace operations under the NATO and UN
United Nations
The United Nations is an international organization whose stated aims are facilitating cooperation in international law, international security, economic development, social progress, human rights, and achievement of world peace...
auspices as military troops and observers.Minister of Defense said that 85 soldiers are trained for international missions. Montenegrin soldiers are trained by the German Bundeswehr
Bundeswehr
The Bundeswehr consists of the unified armed forces of Germany and their civil administration and procurement authorities...
.

Montenegro sent 31 troops and medical personnel to the ISAF
International Security Assistance Force
The International Security Assistance Force is a NATO-led security mission in Afghanistan established by the United Nations Security Council on 20 December 2001 by Resolution 1386 as envisaged by the Bonn Agreement...
mission in Afghanistan.

Montenegro also participates in UN peacekeeping missions in Liberia, UNMIL, Cyprus, UNFICYP as military observers and Somalia, EU-NAVFOR
Operation Atalanta
Operation Atalanta is a current military operation undertaken by the European Union and the European Union Naval Force. It is part of a larger global action by the EU in the Horn of Africa to deal with the Somali crisis; for example World Food Programme ships food aid to ports in Somalia and...
.

| Two-seat basic training aircraft.
| Utva 75 / V-53
| June 2006
| 3
| One crashed to Lake Skadar in 2008.
|-----
! style="align: center; background: lavender;" colspan="8" | Transport and Utility Helicopters
|-----
| Soko Gazelle Gama
Aérospatiale Gazelle
The Aérospatiale Gazelle is a five-seat light helicopter, powered by a single turbine engine. It was designed and manufactured in France by Sud Aviation . It was also manufactured under licence by Westland Aircraft in the United Kingdom , by SOKO in Yugoslavia and ABHCO in Egypt... 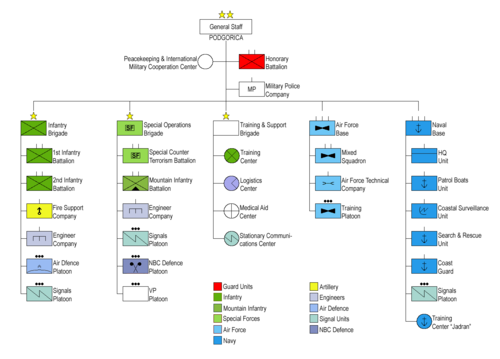 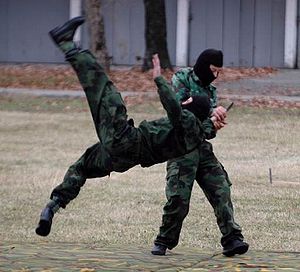 After the establishment of the Kingdom of Montenegro
Kingdom of Montenegro
The Kingdom of Montenegro was a monarchy in southeastern Europe during the tumultuous years on the Balkan Peninsula leading up to and during World War I. Legally it was a constitutional monarchy, but absolutist in practice...
in 1910, Montenegro was involved in three wars with the first one being the First Balkan War
First Balkan War
The First Balkan War, which lasted from October 1912 to May 1913, pitted the Balkan League against the Ottoman Empire. The combined armies of the Balkan states overcame the numerically inferior and strategically disadvantaged Ottoman armies and achieved rapid success...
, in alliance with Serbia
Serbia
Serbia , officially the Republic of Serbia , is a landlocked country located at the crossroads of Central and Southeast Europe, covering the southern part of the Carpathian basin and the central part of the Balkans...
, Greece
Greece
Greece , officially the Hellenic Republic , and historically Hellas or the Republic of Greece in English, is a country in southeastern Europe....
, Romania
Romania
Romania is a country located at the crossroads of Central and Southeastern Europe, on the Lower Danube, within and outside the Carpathian arch, bordering on the Black Sea...
, and Bulgaria
Bulgaria
Bulgaria , officially the Republic of Bulgaria , is a parliamentary democracy within a unitary constitutional republic in Southeast Europe. The country borders Romania to the north, Serbia and Macedonia to the west, Greece and Turkey to the south, as well as the Black Sea to the east...
against the Ottoman Empire
Ottoman Empire
The Ottoman EmpireIt was usually referred to as the "Ottoman Empire", the "Turkish Empire", the "Ottoman Caliphate" or more commonly "Turkey" by its contemporaries...
. The Second Balkan War
Second Balkan War
The Second Balkan War was a conflict which broke out when Bulgaria, dissatisfied with its share of the spoils of the First Balkan War, attacked its former allies, Serbia and Greece, on 29 June 1913. Bulgaria had a prewar agreement about the division of region of Macedonia...
was fought between Montenegro, Serbia, Greece, Romania, the Ottoman Empire and Bulgaria with Bulgaria losing significant territory in the north, Thrace
Thrace
Thrace is a historical and geographic area in southeast Europe. As a geographical concept, Thrace designates a region bounded by the Balkan Mountains on the north, Rhodope Mountains and the Aegean Sea on the south, and by the Black Sea and the Sea of Marmara on the east...
, and Macedonia
Republic of Macedonia
Macedonia , officially the Republic of Macedonia , is a country located in the central Balkan peninsula in Southeast Europe. It is one of the successor states of the former Yugoslavia, from which it declared independence in 1991...
.

The Military of Montenegro before 1918, the year of Montenegro's union with Serbia, was much larger than today's military. During World War I, Montenegro contributed 50,000 troops. The Commander-in-Chief was King Nikola I of Montenegro
Nicholas I of Montenegro
Nikola I Mirkov Petrović-Njegoš was the only king of Montenegro, reigning as king from 1910 to 1918 and as prince from 1860 to 1910. He was also a poet, notably penning "Onamo, 'namo!", a popular song from Montenegro.-Early life:Nikola was born in the village of Njeguši, the ancient home of the...
, while the General of Staff was Božidar Janković
Božidar Jankovic
Božidar Janković was the Commander of the Serbian Third Army during the First Balkan War between the Balkan League and the Ottoman Empire....
. Units included:

The Pljevlja Division was commanded by brigadier Luka Gojnić. The division was made up of 10 battalions. It had around 6,000 soldiers, and patrolled the area east from Pljevlja
Pljevlja
Pljevlja is a town and municipality located in the northern part of Montenegro. The city lies at an altitude of...
.

The Herzegovina Detachment was commanded by serdar Janko Vukotić
Janko Vukotic
Janko Vukotić, was a Serbian General, Serdar and Voivode from Montenegro in the Balkan Wars and World War I. He served as Montenegro's Minister of Defence in periods 1905-1907, 1911–1912 and 1913–1915 and as the Prime Minister of Montenegro 1913-1915...
. The detachment was made up of 15 battalions. It had around 15,000 soldiers, and patrolled the border with Herzegovina
Herzegovina
Herzegovina is the southern region of Bosnia and Herzegovina. While there is no official border distinguishing it from the Bosnian region, it is generally accepted that the borders of the region are Croatia to the west, Montenegro to the south, the canton boundaries of the Herzegovina-Neretva...
.

The Lovćen Detachment was commanded by divizijar Mitar Martinović. The detachment was made up of 18 battalions. It had around 8,000 soldiers, and patrolled the areas of Lovćen and Sutorman.

The 'Old Serbia' Detachment was commanded by brigadier Radomir Vešović. The detachment was made up of 13 battalions. It had around 6,000 soldiers, and secured the Albanian border.