Encyclopedia
On December 1, 1948, President José Figueres Ferrer
José Figueres Ferrer
José María Hipólito Figueres Ferrer , served as President of Costa Rica on three occasions:1948–1949, 1953–1958, and 1970–1974....
of Costa Rica
Costa Rica
Costa Rica , officially the Republic of Costa Rica is a multilingual, multiethnic and multicultural country in Central America, bordered by Nicaragua to the north, Panama to the southeast, the Pacific Ocean to the west and the Caribbean Sea to the east....
abolished the military of Costa Rica after victory in the civil war
Costa Rican Civil War
The Costa Rican Civil War was the bloodiest event in 20th century Costa Rican history. It lasted for 44 days , during which approximately 2,000 people are believed to have died...
in that year.
In a ceremony in the Cuartel Bellavista, Figueres broke a wall with a mallet
Mallet
A mallet is a kind of hammer, usually of rubber,or sometimes wood smaller than a maul or beetle and usually with a relatively large head.-Tools:Tool mallets come in different types, the most common of which are:...
symbolizing the end of Costa Rica's military spirit.
In 1949, the abolition of the military was introduced in Article 12 of the Costa Rican Constitution. 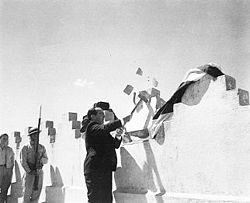 The budget previously dedicated to the military now is dedicated to security, education and culture; the country maintains Police Guard forces.
The museum Museo Nacional de Costa Rica was placed in the Cuartel Bellavista as a symbol of commitment to culture.

Unlike its neighbours, Costa Rica has not endured a civil war
Civil war
A civil war is a war between organized groups within the same nation state or republic, or, less commonly, between two countries created from a formerly-united nation state....
since 1948.

During 1996, the Ministry of Public Security established the Fuerza Pública or Public Force which reorganized and eliminated the Civil Guard
Civil Guard (Costa Rica)
Civil Guard of Costa Rica was a gendarmerie type force responsible for both limited national defense and internal security missions....
, Rural Assistance Guard, and Frontier Guards as separate entities; they are now under the Ministry and operate on a geographic command basis performing ground security, law enforcement, counter-narcotics, and border patrol functions.

Outside the Fuerza Pública, there is a small Special Forces Unit, the Unidad Especial de Intervencion (UEI) or Special Intervention Unit, which trains with special forces of Israel, and its namesake in Spain and other democratic nations, but is not part of the main police forces. Instead it is part of the Intelligence and Security Directorate (DIS) which reports directly to the Minister of the Presidency.