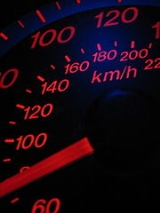 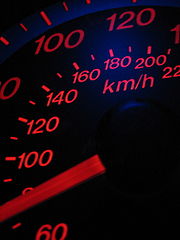 Miles per hour is an imperial unit of speed
Speed
In kinematics, the speed of an object is the magnitude of its velocity ; it is thus a scalar quantity. The average speed of an object in an interval of time is the distance traveled by the object divided by the duration of the interval; the instantaneous speed is the limit of the average speed as...
expressing the number of statute miles
Mile
A mile is a unit of length, most commonly 5,280 feet . The mile of 5,280 feet is sometimes called the statute mile or land mile to distinguish it from the nautical mile...
covered in one hour
Hour
The hour is a unit of measurement of time. In modern usage, an hour comprises 60 minutes, or 3,600 seconds...
. It is currently the standard unit used for speed limit
Speed limit
Road speed limits are used in most countries to regulate the speed of road vehicles. Speed limits may define maximum , minimum or no speed limit and are normally indicated using a traffic sign...
s, and to express speeds generally, on road
Road
A road is a thoroughfare, route, or way on land between two places, which typically has been paved or otherwise improved to allow travel by some conveyance, including a horse, cart, or motor vehicle. Roads consist of one, or sometimes two, roadways each with one or more lanes and also any...
s in the United Kingdom
United Kingdom
The United Kingdom of Great Britain and Northern IrelandIn the United Kingdom and Dependencies, other languages have been officially recognised as legitimate autochthonous languages under the European Charter for Regional or Minority Languages...
and the United States
United States
The United States of America is a federal constitutional republic comprising fifty states and a federal district...
. It is also often used to express the speed of delivery of a ball in various sporting events, such as cricket
Cricket
Cricket is a bat-and-ball game played between two teams of 11 players on an oval-shaped field, at the centre of which is a rectangular 22-yard long pitch. One team bats, trying to score as many runs as possible while the other team bowls and fields, trying to dismiss the batsmen and thus limit the...
, tennis
Tennis
Tennis is a sport usually played between two players or between two teams of two players each . Each player uses a racket that is strung to strike a hollow rubber ball covered with felt over a net into the opponent's court. Tennis is an Olympic sport and is played at all levels of society at all...
, and baseball
Baseball
Baseball is a bat-and-ball sport played between two teams of nine players each. The aim is to score runs by hitting a thrown ball with a bat and touching a series of four bases arranged at the corners of a ninety-foot diamond...
. A common abbreviation is mph or MPH.

In the International System of Units
International System of Units
The International System of Units is the modern form of the metric system and is generally a system of units of measurement devised around seven base units and the convenience of the number ten. The older metric system included several groups of units...
(SI), the basic unit of speed or velocity is m/s
Metre per second
Metre per second is an SI derived unit of both speed and velocity , defined by distance in metres divided by time in seconds....
. Road traffic speeds in most countries are quoted in km/h
Kilometres per hour
The kilometre per hour is a unit of speed, expressing the number of kilometres traveled in one hour. The unit symbol is km/h or km·h−1....
. Occasionally, however, both systems are used: for example, in Ireland
Ireland
Ireland is an island to the northwest of continental Europe. It is the third-largest island in Europe and the twentieth-largest island on Earth...
, a judge considered a speeding case by examining speeds in both kilometres per hour and miles per hour. The judge was quoted as saying the speed seemed "very excessive" at 180 km/h but did not look "as bad" at 112 mph; a reduced fine was still imposed on the speeding driver.

When converting miles per hour to another unit of measurement, or vice versa, it helps to know exactly how miles and hours are related to other units of distance
Distance
Distance is a numerical description of how far apart objects are. In physics or everyday discussion, distance may refer to a physical length, or an estimation based on other criteria . In mathematics, a distance function or metric is a generalization of the concept of physical distance...
and time
Time
Time is a part of the measuring system used to sequence events, to compare the durations of events and the intervals between them, and to quantify rates of change such as the motions of objects....
, respectively. For example, 1 mile is equal to 5,280 feet, 1,760 yard
Yard
A yard is a unit of length in several different systems including English units, Imperial units and United States customary units. It is equal to 3 feet or 36 inches...
s, or 1,609.344 metre
Metre
The metre , symbol m, is the base unit of length in the International System of Units . Originally intended to be one ten-millionth of the distance from the Earth's equator to the North Pole , its definition has been periodically refined to reflect growing knowledge of metrology...
s. Likewise, 1 hour is equal to 60 minutes
Minutes
Minutes, also known as protocols, are the instant written record of a meeting or hearing. They typically describe the events of the meeting, starting with a list of attendees, a statement of the issues considered by the participants, and related responses or decisions for the issues.Minutes may be...
, or 3,600 second
Second
The second is a unit of measurement of time, and is the International System of Units base unit of time. It may be measured using a clock....
s.