Encyclopedia
Russian Aircraft Corporation MiG (Российская самолетостроительная корпорация «МиГ»), or RSK MiG, is a Russia
Russia
Russia or , officially known as both Russia and the Russian Federation , is a country in northern Eurasia. It is a federal semi-presidential republic, comprising 83 federal subjects...
n joint stock company
Joint stock company
A joint-stock company is a type of corporation or partnership involving two or more individuals that own shares of stock in the company...
. Formerly Mikoyan-and-Gurevich Design Bureau , then simply Mikoyan, it is a military aircraft
Aircraft
An aircraft is a vehicle that is able to fly by gaining support from the air, or, in general, the atmosphere of a planet. An aircraft counters the force of gravity by using either static lift or by using the dynamic lift of an airfoil, or in a few cases the downward thrust from jet engines.Although...
design bureau, primarily designing fighter aircraft
Fighter aircraft
A fighter aircraft is a military aircraft designed primarily for air-to-air combat with other aircraft, as opposed to a bomber, which is designed primarily to attack ground targets...
. Its head office is in Begovoy District
Begovoy District
Begovoy District is an administrative district of Northern Administrative Okrug, and one of the 125 raions of Moscow, Russia.-Economy:The aviation companies Mikoyan and Sukhoi have their head offices in the district....
, Northern Administrative Okrug
Northern Administrative Okrug
Northern Administrative Okrug, or Severny Administrative Okrug , is one of the ten administrative okrugs of Moscow, Russia. It was founded in 1991 and has an area of...
, Moscow
Moscow
Moscow is the capital, the most populous city, and the most populous federal subject of Russia. The city is a major political, economic, cultural, scientific, religious, financial, educational, and transportation centre of Russia and the continent...
.

It was formerly a Soviet
Soviet Union
The Soviet Union , officially the Union of Soviet Socialist Republics , was a constitutionally socialist state that existed in Eurasia between 1922 and 1991....
design bureau
OKB
OKB is a transliteration of the Russian acronym for "Опытное конструкторское бюро" - Opytnoe Konstructorskoe Byuro, meaning Experimental Design Bureau...
, and was founded by Artem Mikoyan and Mikhail Gurevich as "Mikoyan and Gurevich", with the bureau prefix "MiG." Upon Mikoyan's death in 1970, Gurevich's name was dropped from the name of the bureau, although the bureau prefix remained "MiG". The firm also operates several machine-building and design bureaus, including the Kamov
Kamov
Kamov is a Russian rotor-winged aircraft manufacturing company that was founded by Nikolai Il'yich Kamov, who started building his first rotor-winged aircraft in 1929, together with N. K. Skrzhinskii...
helicopter plant.

MiG aircraft were also used by the Chinese, North Korean, and North Vietnamese in aerial confrontations with American and allied forces. The Soviet Union sold many of these planes within its sphere of influence
Sphere of influence
In the field of international relations, a sphere of influence is a spatial region or conceptual division over which a state or organization has significant cultural, economic, military or political influence....
. 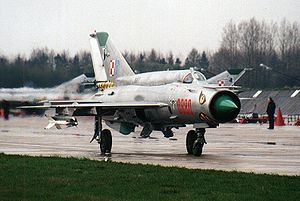 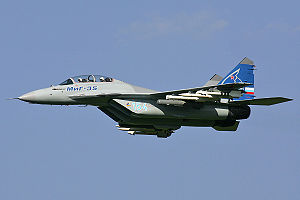 MiGs follow the convention of using odd numbers for fighter aircraft. However, this naming convention is maintained not directly by MiG, but by ordering institutions, such as Ministry of Defence or Council of Ministers' Military-Industrial Commission (while in Soviet Union). The original designations for MiG aircraft are 2- or 3-digit numbers, separated by a dot. 1.44 or 1.42 is an example of original naming. Although the MiG-8 and MiG-110 exist, they are not fighters. The MiG-105 "Spiral" was designed as an orbital interceptor, contemporaneous with the U.S. Air Force's cancelled X-20 Dyna-Soar
X-20 Dyna-Soar
The X-20 Dyna-Soar was a United States Air Force program to develop a spaceplane that could be used for a variety of military missions, including reconnaissance, bombing, space rescue, satellite maintenance, and sabotage of enemy satellites...
.