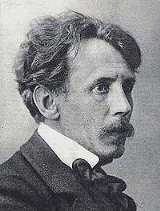 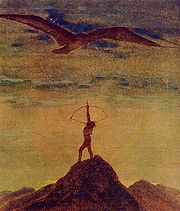 Mikalojus Konstantinas Čiurlionis (Polish 'Mikołaj Konstanty Czurlanis'), also known as M. K. Čiurlionis ( –) was a Lithuanian
Lithuanians
Lithuanians are the Baltic ethnic group native to Lithuania, where they number around 2,765,600 people. Another million or more make up the Lithuanian diaspora, largely found in countries such as the United States, Brazil, Canada, Colombia, Russia, United Kingdom and Ireland. Their native language...
painter
Painting
Painting is the practice of applying paint, pigment, color or other medium to a surface . The application of the medium is commonly applied to the base with a brush but other objects can be used. In art, the term painting describes both the act and the result of the action. However, painting is...
and composer. Čiurlionis contributed to symbolism
Symbolism (arts)
Symbolism was a late nineteenth-century art movement of French, Russian and Belgian origin in poetry and other arts. In literature, the style had its beginnings with the publication Les Fleurs du mal by Charles Baudelaire...
and art nouveau
Art Nouveau
Art Nouveau is an international philosophy and style of art, architecture and applied art—especially the decorative arts—that were most popular during 1890–1910. The name "Art Nouveau" is French for "new art"...
and was representative of the fin de siècle
Fin de siècle
Fin de siècle is French for "end of the century". The term sometimes encompasses both the closing and onset of an era, as it was felt to be a period of degeneration, but at the same time a period of hope for a new beginning...
epoch. During his short life he composed about 250 pieces of music and created about 300 paintings. The majority of his paintings are housed in the M. K. Čiurlionis National Art Museum
M. K. Ciurlionis National Art Museum
The M. K. Čiurlionis National Art Museum is a group of museums based in Kaunas, Lithuania. It is primarily dedicated to exhibiting and publicizing the works of the painter and musician M.K. Čiurlionis ....
in Kaunas
Kaunas
Kaunas is the second-largest city in Lithuania and has historically been a leading centre of Lithuanian economic, academic, and cultural life. Kaunas was the biggest city and the center of a powiat in Trakai Voivodeship of the Grand Duchy of Lithuania since 1413. During Russian Empire occupation...
, Lithuania
Lithuania
Lithuania , officially the Republic of Lithuania is a country in Northern Europe, the biggest of the three Baltic states. It is situated along the southeastern shore of the Baltic Sea, whereby to the west lie Sweden and Denmark...
. His works have had a profound influence on modern Lithuanian culture. The asteroid 2420 Čiurlionis
2420 Ciurlionis
2420 Čiurlionis is a main belt asteroid with an orbital period of 1496.2748368 days .The asteroid was discovered on October 3, 1975 at the Crimean Astrophysical Observatory and was named after Lithuanian artist Mikalojus Konstantinas Čiurlionis....
is named after him.

Mikalojus Konstantinas Čiurlionis was born in Senoji Varėna, the oldest of nine children of his father, Konstantinas, and his mother, Adelė. Like many educated Lithuanians of the time, Čiurlionis's family spoke Polish, and he became fluent in Lithuanian
Lithuanian language
Lithuanian is the official state language of Lithuania and is recognized as one of the official languages of the European Union. There are about 2.96 million native Lithuanian speakers in Lithuania and about 170,000 abroad. Lithuanian is a Baltic language, closely related to Latvian, although they...
only after meeting his fiancée. In 1878 his family moved to Druskininkai
Druskininkai
Druskininkai is a spa town on the Neman River in southern Lithuania, close to the borders of Belarus and Poland. The city of Druskininkai has a population of 18,233 and dates back as a spa resort to the 19th century.-Names:...
, where his father went on to be the town organist. Čiurlionis was a musical prodigy: he could play by ear at age three and could sight-read music freely by age seven. Three years out of primary school, he went to study at the musical school of Prince Michał Ogiński where he learned to play several orchestral instruments, in particular the flute, from 1889 to 1893. Supported by Prince Ogiński's 'scholarship' Čiurlionis studied piano and composition at the Warsaw
Warsaw
Warsaw is the capital and largest city of Poland. It is located on the Vistula River, roughly from the Baltic Sea and from the Carpathian Mountains. Its population in 2010 was estimated at 1,716,855 residents with a greater metropolitan area of 2,631,902 residents, making Warsaw the 10th most...
Conservatory from 1894 to 1899. For his graduation, in 1899, he wrote a cantata
Cantata
A cantata is a vocal composition with an instrumental accompaniment, typically in several movements, often involving a choir....
for mixed chorus and symphonic orchestra titled De Profundis, with the guidance of the composer Zygmunt Noskowski
Zygmunt Noskowski
Zygmunt Noskowski , Polish composer, conductor and teacher.-Biography:Zygmunt Noskowski was born in Warsaw and was originally trained at the Warsaw Conservatory studying violin and composition. A scholarship enabled him to travel to Berlin where between 1864 and 1867, he studied with Friedrich...
. Later he attended composition lectures at the Leipzig Conservatory (1901 to 1902), and studied drawing at the Warsaw School of Fine Arts from 1904 to 1906 and became a friend of Polish composer and painter Eugeniusz Morawski-Dąbrowa. After the 1905 Russian Revolution, which resulted in the loosening of cultural restrictions on the Empire's minorities, he began to identify himself as a Lithuanian.

He was one of the initiators of, and a participant in, the First Exhibition of Lithuanian Art that took place in 1907 in Vileišis Palace
Vileišis Palace
Vileišis Palace is a Neo-baroque style architectural ensemble in Vilnius, Lithuania, built for Petras Vileišis. Vileišis was a prominent Lithuanian engineer, political activist, publisher, and philanthropist who commissioned the palace in 1904 and supervised its construction. The ensemble consists...
, Vilnius
Vilnius
Vilnius is the capital of Lithuania, and its largest city, with a population of 560,190 as of 2010. It is the seat of the Vilnius city municipality and of the Vilnius district municipality. It is also the capital of Vilnius County...
. Soon after this event the Lithuanian Union of Arts was founded, and Čiurlionis was one of its 19 founding members.

In 1907 he became acquainted with Sofija Kymantaitė (1886–1958), an art critic
Art critic
An art critic is a person who specializes in evaluating art. Their written critiques, or reviews, are published in newspapers, magazines, books and on web sites...
. Through this association Čiurlionis learned to speak better Lithuanian. Early in 1909 he married Sofija. At the end of that year he traveled to St. Petersburg, where he exhibited some of his paintings. On Christmas Eve Čiurlionis fell into a profound depression and at the beginning of 1910 was hospitalized in a sanatorium called „Czerwony Dwór" (Red Manor) in Pustelnik( now Marki
Marki
Marki is a town in central Poland, just to the north-east of the Polish capital Warsaw.Marki, a Warsaw suburb, was incorporated in 1967. While by Polish standards Marki is a relatively young town, with approximately 23,000 residents, it is one of the fastest growing cities in the Masovian...
), northeast of Warsaw
Warsaw
Warsaw is the capital and largest city of Poland. It is located on the Vistula River, roughly from the Baltic Sea and from the Carpathian Mountains. Its population in 2010 was estimated at 1,716,855 residents with a greater metropolitan area of 2,631,902 residents, making Warsaw the 10th most...
. While a patient there he died of pneumonia in 1911 at 35 years of age. He was buried at the Rasos Cemetery
Rasos Cemetery
Rasos Cemetery is the oldest and most famous cemetery in the city of Vilnius, Lithuania. It is named after the Rasos district where it is located. It is separated into two parts, the old and the new cemeteries, by a narrow Sukilėliai Street. The total area is 10.8 ha...
in Vilnius
Vilnius
Vilnius is the capital of Lithuania, and its largest city, with a population of 560,190 as of 2010. It is the seat of the Vilnius city municipality and of the Vilnius district municipality. It is also the capital of Vilnius County...
. He never saw his daughter Danutė (1910–1995).

In 1911 the first posthumous exhibition of Mikalojus Konstantinas Čiurlionis's art was held in Vilnius
Vilnius
Vilnius is the capital of Lithuania, and its largest city, with a population of 560,190 as of 2010. It is the seat of the Vilnius city municipality and of the Vilnius district municipality. It is also the capital of Vilnius County...
and Kaunas
Kaunas
Kaunas is the second-largest city in Lithuania and has historically been a leading centre of Lithuanian economic, academic, and cultural life. Kaunas was the biggest city and the center of a powiat in Trakai Voivodeship of the Grand Duchy of Lithuania since 1413. During Russian Empire occupation...
. During the same year an exhibition of his art was held in Moscow, and in 1912 his works were exhibited in St. Petersburg. The National M. K. Čiurlionis School of Art
National M. K. Ciurlionis School of Art
National M. K. Čiurlionis School Of Art was founded in 1945 in Vilnius, Lithuania. It is named after the famous Lithuanian painter and composer Mikalojus Konstantinas Čiurlionis. It is the only such school in Lithuania, spanning the entire 12 year learning cycle...
was founded in Vilnius in 1945; soon afterwards the Lithuanian community in Chicago opened the Čiurlionis Art Gallery, hosting collections of his works. In 1963 the Čiurlionis Memorial Museum was opened in Druskininkai, in the house where Čiurlionis and his family lived. This museum holds biographical documents as well as photographs and reproductions of the artist's works.

Čiurlionis inspired the Lithuanian composer Osvaldas Balakauskas
Osvaldas Balakauskas
Osvaldas Balakauskas is a Lithuanian composer of classical music.- Career :Balakauskas graduated from Vilnius Pedagogical University in 1961. After his mandatory service in the Soviet Army between 1961 and 1964, he studied composition with Boris Lyatoshinsky and M. M. Skorik at Kiev Conservatory...
' work Sonata of the Mountains (1975), and every four years junior musical performers from Lithuania and neighbouring countries take part in the Čiurlionis Competition. Čiurlionis's name has been given to cliffs in Franz Josef Land
Franz Josef Land
Franz Josef Land, Franz Joseph Land, or Francis Joseph's Land is an archipelago located in the far north of Russia. It is found in the Arctic Ocean north of Novaya Zemlya and east of Svalbard, and is administered by Arkhangelsk Oblast. Franz Josef Land consists of 191 ice-covered islands with a...
, a peak in the Pamir Mountains
Pamir Mountains
The Pamir Mountains are a mountain range in Central Asia formed by the junction or knot of the Himalayas, Tian Shan, Karakoram, Kunlun, and Hindu Kush ranges. They are among the world’s highest mountains and since Victorian times they have been known as the "Roof of the World" a probable...
, and to asteroid #2420
2420 Ciurlionis
2420 Čiurlionis is a main belt asteroid with an orbital period of 1496.2748368 days .The asteroid was discovered on October 3, 1975 at the Crimean Astrophysical Observatory and was named after Lithuanian artist Mikalojus Konstantinas Čiurlionis....
, discovered by the Crimean astrophysicist Nikolaj Cernych.

Čiurlionis's works have been displayed at international exhibitions in Japan, Germany, Spain, and elsewhere. His paintings were featured at "Visual Music" fest, an homage to synesthesia that included the works of Wassily Kandinsky
Wassily Kandinsky
Wassily Wassilyevich Kandinsky was an influential Russian painter and art theorist. He is credited with painting the first purely-abstract works. Born in Moscow, Kandinsky spent his childhood in Odessa. He enrolled at the University of Moscow, studying law and economics...
, James McNeill Whistler, and Paul Klee
Paul Klee
Paul Klee was born in Münchenbuchsee, Switzerland, and is considered both a German and a Swiss painter. His highly individual style was influenced by movements in art that included expressionism, cubism, and surrealism. He was, as well, a student of orientalism...
, at the Museum of Contemporary Art, Los Angeles
Museum of Contemporary Art, Los Angeles
The Museum of Contemporary Art, Los Angeles is a contemporary art museum with three locations in greater Los Angeles, California. The main branch is located on Grand Avenue in Downtown Los Angeles, near Walt Disney Concert Hall...
in 2005.

Some of his most-performed musical works include:

The most famous Mikalojus Konstantinas Čiurlionis paintings include: