Encyclopedia
A mid-engine layout describes the placement of an automobile
Automobile
An automobile, autocar, motor car or car is a wheeled motor vehicle used for transporting passengers, which also carries its own engine or motor...
engine between the rear and front axles. Another term for this is mid-ship.

Mounting the engine in the middle instead of the front of the vehicle puts more weight over the rear tires so they have more traction and provide more assistance to the front tires in braking the vehicle, with less chance of rear wheel lockup and less chance of a skid or spin out. If the mid-engine vehicle is also rear-drive (as almost all of them are) the added weight on the rear tires can also improve acceleration on slippery surfaces, providing much of the benefit of all wheel drive without the added weight and expense of all wheel drive components. The mid-engine layout makes ABS brakes and traction control systems work better, by providing them more traction to control. The mid-engine layout may make a vehicle safer, since an accident can occur if a vehicle cannot stay in its own lane around a curve or is unable to stop quickly enough. Mid-engine design is also a way to provide additional empty crush space in the front of the automobile between the bumper and the windshield, which can then be used in a frontal collision to absorb more of the impact force to minimize penetration into the passenger compartment of the vehicle.

In most automobiles, and in sports cars especially, ideal car handling
Car handling
Automobile handling and vehicle handling are descriptions of the way wheeled vehicles perform transverse to their direction of motion, particularly during cornering and swerving. It also includes their stability when moving at rest. Handling and braking are the major components of a vehicle's...
requires balanced traction between the front and rear wheels when cornering in order to maximize the possible speed around curves without sliding out. This balance is harder to achieve when the heavy weight of the engine is located far to the front or far to the rear of the vehicle. Some automobile designs strive to balance the fore and aft weight distribution by other means such as putting the engine in the front and the transmission and battery in the rear of the vehicle. Some of the same benefits are gained, but at the cost of greater moment of inertia
Moment of inertia
In classical mechanics, moment of inertia, also called mass moment of inertia, rotational inertia, polar moment of inertia of mass, or the angular mass, is a measure of an object's resistance to changes to its rotation. It is the inertia of a rotating body with respect to its rotation...
compared to the mid-engine layout, making it harder and less responsive to turn the vehicle to a new direction.

Another benefit comes when the heavy mass of the engine is located close to the back of the seats. It makes it easier for the suspension to absorb the force of bumps so the riders feel a smoother ride. But in sports cars the engine position is once again utilized to increase performance and the potentially smoother ride is usually more than offset by stiffer shock absorber
Shock absorber
A shock absorber is a mechanical device designed to smooth out or damp shock impulse, and dissipate kinetic energy. It is a type of dashpot.-Nomenclature:...
s.

This layout also allows the transmission and motor to be directly bolted to each other—with independent suspension on the driven wheels this removes the need for the chassis to transfer engine torque reaction. 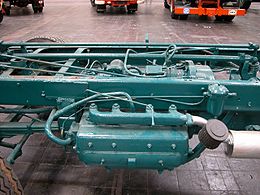 The largest drawback of mid-engine cars is restricted rear passenger space; most mid-engine vehicles are two-seat vehicles. The engine in effect pushes the passenger compartment forward towards the front axle
Axle
An axle is a central shaft for a rotating wheel or gear. On wheeled vehicles, the axle may be fixed to the wheels, rotating with them, or fixed to its surroundings, with the wheels rotating around the axle. In the former case, bearings or bushings are provided at the mounting points where the axle...
(if engine is behind driver). Exceptions typically involve larger vehicles of unusual length or height in which the passengers can share space between the axles with the engine, which can be between them or below them, as in some Toyota vans, large trucks and buses. The mid-engine layout (with a horizontal engine) was common in single-decker buses in the 1950s and 1960s, e.g. the AEC Reliance
AEC Reliance
The AEC Reliance was a single-deck bus or coach chassis with a mid-underfloor-mounted engine, built by AEC in Southall, west London, England between 1953 and 1979. The name had previously been used between 1928 and 1931 for another single-deck bus chassis....
. The Ferrari Mondial
Ferrari Mondial
The final Mondial evolution was 1989's Mondial t . It was a substantially changed model, "spearhead of a new generation of V8 Ferraris", according to Road & Track magazine. It was visually different from preceding Mondial models, the most recognisable being the redesign of the air intakes to a...
is to date the only successful example of a true mid-engined convertible with seating for 4 and sports car / supercar performance. A version of the Lotus Evora
Lotus Evora
The Lotus Evora is a sports car produced by British car manufacturer Lotus. The car, which was developed under the project name Project Eagle, was launched as the Evora on 22 July 2008 at the British International Motor Show.- Development :...
with a removable roof panel is anticipated but no definite date is known.

Like any layout where the engine is not front-mounted and facing the wind, the traditional "engine-behind-the-passengers" layout makes engine cooling more difficult. This has been a problem in some cars such as the Porsche 914
Porsche 914
The Porsche 914 or VW-Porsche 914 is a mid-engined, targa-topped two-seat roadster designed, manufactured and marketed collaboratively by Volkswagen and Porsche from 1969 to 1976.- Development :...
, which is air cooled rather than having a front-mounted coolant system. But this issue seems to have been largely solved in newer designs. For example, the Saleen S7
Saleen S7
The Saleen S7 is a limited-production, hand-built, high-performance American supercar developed jointly by Steve Saleen for the initial concept and direction, Hidden Creek Industries for resources and initial funding, Phil Frank for the body and interior CAD design and development, and Ray Mallock...
employs large engine-compartment vents on the sides and rear of the bodywork to help dissipate heat from its very high-output engine.

The term "mid-engine" has usually been applied to cars having the engine located between the driver and the rear drive axles. This layout is referred to here as RMR layout. Sports and racing cars typically have this mid-engine layout, as these vehicles' handling
Car handling
Automobile handling and vehicle handling are descriptions of the way wheeled vehicles perform transverse to their direction of motion, particularly during cornering and swerving. It also includes their stability when moving at rest. Handling and braking are the major components of a vehicle's...
characteristics are more important than other features, such as capacity. Additionally the mechanical layout and packaging of a RMR car is substantially different from that of a front engine or rear engine car.

A subset of Front-Rear when the engine is in front of the driver, but fully behind the front axle line, the layout is sometimes called Front Mid engine Rear FMR layout instead of the less-specific term front-engine. In handling and vehicle layout FMR is substantially the same as FR. Some vehicles could be classified as FR or FMR depending on the factory installed engine (I4 vs I6). Historically most classical FR cars such as the Ford Models T and A would qualify as a FMR engine car. Additionally, the difference between FR and FMR may be as little as a few millimeters of engine protrusion in front of the front axle line as manufacturers mount engine as far back in the chassis as possible. Not all manufacturers use the Front-Mid designation.

These cars are RWD cars with engine placed between driver and front axle. Typically, however, these cars are referred to as FR cars instead.

This layout, similar to above FMR layout, with engine between driver and behind front axle, adds front wheel drive to become a four-wheel drive.