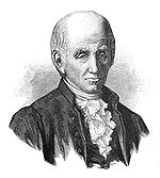 Encyclopedia
Michel Adanson was a French
France
The French Republic , The French Republic , The French Republic , (commonly known as France , is a unitary semi-presidential republic in Western Europe with several overseas territories and islands located on other continents and in the Indian, Pacific, and Atlantic oceans. Metropolitan France...
naturalist
Natural history
Natural history is the scientific research of plants or animals, leaning more towards observational rather than experimental methods of study, and encompasses more research published in magazines than in academic journals. Grouped among the natural sciences, natural history is the systematic study...
of Scottish
Scotland
Scotland is a country that is part of the United Kingdom. Occupying the northern third of the island of Great Britain, it shares a border with England to the south and is bounded by the North Sea to the east, the Atlantic Ocean to the north and west, and the North Channel and Irish Sea to the...
descent.

Adanson was born at Aix-en-Provence
Aix-en-Provence
Aix , or Aix-en-Provence to distinguish it from other cities built over hot springs, is a city-commune in southern France, some north of Marseille. It is in the region of Provence-Alpes-Côte d'Azur, in the département of Bouches-du-Rhône, of which it is a subprefecture. The population of Aix is...
. His family moved to Paris
Paris
Paris is the capital and largest city in France, situated on the river Seine, in northern France, at the heart of the Île-de-France region...
on 1730. After leaving the College Sainte Barbe he was employed in the cabinets of R. A. F. Reaumur
René Antoine Ferchault de Réaumur
René Antoine Ferchault de Réaumur was a French scientist who contributed to many different fields, especially the study of insects.-Life:Réaumur was born in a prominent La Rochelle family and educated in Paris...
and Bernard de Jussieu
Bernard de Jussieu
Bernard de Jussieu was a French naturalist, younger brother of Antoine de Jussieu.Bernard de Jussieu was born in Lyon...
, as well as in the Jardin des Plantes
Jardin des Plantes
The Jardin des Plantes is the main botanical garden in France. It is one of seven departments of the Muséum national d'histoire naturelle. It is situated in the 5ème arrondissement, Paris, on the left bank of the river Seine and covers 28 hectares .- Garden plan :The grounds of the Jardin des...
. At the end of 1748 he left France
France
The French Republic , The French Republic , The French Republic , (commonly known as France , is a unitary semi-presidential republic in Western Europe with several overseas territories and islands located on other continents and in the Indian, Pacific, and Atlantic oceans. Metropolitan France...
on an exploring expedition to Senegal
Senegal
Senegal , officially the Republic of Senegal , is a country in western Africa. It owes its name to the Sénégal River that borders it to the east and north...
. He remained there for five years, collecting and describing numerous animals and plants. He also collected specimens of every object of commerce, delineated maps of the country, made systematic meteorological and astronomical observations, and prepared grammars and dictionaries of the languages spoken on the banks of the Senegal.

After his return to Paris in 1754 he made use of a small portion of the materials he had collected in his Histoire naturelle du Senegal (1757). This work has a special interest from the essay on shells, printed at the end of it, where Adanson proposed his universal method, a system of classification distinct from those of Buffon
Georges-Louis Leclerc, Comte de Buffon
Georges-Louis Leclerc, Comte de Buffon was a French naturalist, mathematician, cosmologist, and encyclopedic author.His works influenced the next two generations of naturalists, including Jean-Baptiste Lamarck and Georges Cuvier...
and Linnaeus
Carolus Linnaeus
Carl Linnaeus , also known after his ennoblement as , was a Swedish botanist, physician, and zoologist, who laid the foundations for the modern scheme of binomial nomenclature. He is known as the father of modern taxonomy, and is also considered one of the fathers of modern ecology...
. He founded his classification of all organized beings on the consideration of each individual organ. As each organ gave birth to new relations, so he established a corresponding number of arbitrary arrangements. Those beings possessing the greatest number of similar organs were referred to one great division, and the relationship was considered more remote in proportion to the dissimilarity of organs.

In 1774 Adanson submitted to the consideration of the French Academy of Sciences
French Academy of Sciences
The French Academy of Sciences is a learned society, founded in 1666 by Louis XIV at the suggestion of Jean-Baptiste Colbert, to encourage and protect the spirit of French scientific research...
an immense work, extending to all known beings and substances. It consisted of 27 large volumes of manuscript, employed in displaying the general relations of all these matters, and their distribution; 150 volumes more, occupied with the alphabetical arrangement of 40,000 species; a vocabulary, containing 200,000 words, with their explanations; and a number of detached memoirs, 40,000 figures and 30,000 specimens of the three kingdoms of nature. The committee to which the inspection of this enormous mass was entrusted strongly recommended Adanson to separate and publish all that was peculiarly his own, leaving out what was merely compilation. He obstinately rejected this advice; and the huge work, at which he continued to labour, was never published.

He had been elected a member of the Academy of Sciences in 1759, and he latterly subsisted on a small pension it had conferred on him. Of this he was deprived in the dissolution of the Academy by the Constituent Assembly, and was consequently reduced to such a depth of poverty as to be unable to appear before the French Institute when it invited him to take his place among its members. (It is said that he possessed neither a white shirt, a coat nor a whole pair of breeches.) Afterwards he was granted a pension sufficient to relieve his simple wants.

He died at Paris after months of severe suffering, requesting, as the only decoration of his grave, a garland of flowers gathered from the fifty-eight families he had differentiated - "a touching though transitory image," says Georges Cuvier
Georges Cuvier
Georges Chrétien Léopold Dagobert Cuvier or Jean Léopold Nicolas Frédéric Cuvier , known as Georges Cuvier, was a French naturalist and zoologist...
, "of the more durable monument which he has erected to himself in his works."

His papers and herbarium remained in his family's hands for over a century and a half, finally coming to the Hunt Botanical Library around 1960. Subsequently the Hunt Institute republished his Familles des plantes in two volumes (1963-64), under the editorship of G. H. M. Lawrence.