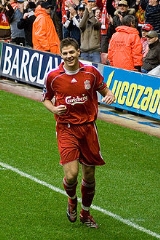 Gerrard, who has spent his entire career at Anfield
Anfield
Anfield is an association football stadium in the district of Anfield, Liverpool, England, with a seating capacity of 45,522. It has been the home of Liverpool F.C. since their formation in 1892 and was originally the home of Everton F.C. from 1884 to 1892, before they moved to Goodison Park...
, made his début in 1998 and cemented his place in the first team in the 2000–01 season, succeeding Sami Hyypiä
Sami Hyypiä
Sami Tuomas Hyypiä is a retired European Cup winning Finnish footballer who played in the centre back position. He last played for German Bundesliga side Bayer 04 Leverkusen and was the captain of the Finland national football team. He joined Leverkusen in summer 2009, ending a ten year spell at...
as Liverpool team captain in 2003.