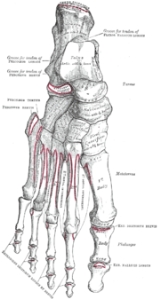 In humans the largest bone in the tarsus is the calcaneus, which is the weight-bearing bone within the heel of the foot.

There are seven tarsal bones in the human body
Human body
The human body is the entire structure of a human organism, and consists of a head, neck, torso, two arms and two legs.By the time the human reaches adulthood, the body consists of close to 100 trillion cells, the basic unit of life...
:

The talus bone
Talus bone
-External links:* *...
or ankle bone is connected superiorly to the two bones of the lower leg, the tibia
Tibia
The tibia , shinbone, or shankbone is the larger and stronger of the two bones in the leg below the knee in vertebrates , and connects the knee with the ankle bones....
and fibula, to form the ankle joint
Ankle
The ankle joint is formed where the foot and the leg meet. The ankle, or talocrural joint, is a synovial hinge joint that connects the distal ends of the tibia and fibula in the lower limb with the proximal end of the talus bone in the foot...
or talocrural joint; inferiorly, at the subtalar joint
Subtalar joint
In human anatomy, the subtalar joint, also known as thetalocalcaneal joint, is a joint of the foot. It occurs at the meeting point of the talus and the calcaneus.-Motion:...
, to the calcaneus or heel bone. Together, the talus and calcaneus form the hindfoot.

The five irregular bones of the midfootthe cuboid, navicular
Navicular bone
The navicular bone is a small bone found in the feet of both humans and horses.- Human anatomy :The navicular bone is one of the tarsal bones, found in the foot. Its name derives from the bone's resemblance to a small boat, caused by the strongly concave proximal articular surface...
, and three cuneiform
Cuneiform (anatomy)
There are three cuneiform bones in the human foot:* the medial cuneiform* the intermediate cuneiform also known as the middle* the lateral cuneiform...
bonesform the arches of the foot
Arches of the foot
-External links:* * *...
which serves as a shock absorber. The midfoot is connected to the hind- and forefoot by muscles and the plantar fascia
Plantar fascia
The plantar fascia is the thick connective tissue which supports the arch on the bottom of the foot. It runs from the tuberosity of the calcaneus forward to the heads of the metatarsal bones .The often painful condition plantar fasciitis is an inflammatory condition of the plantar...
.

The complex motion of the subtalar joint
Subtalar joint
In human anatomy, the subtalar joint, also known as thetalocalcaneal joint, is a joint of the foot. It occurs at the meeting point of the talus and the calcaneus.-Motion:...
occurs in three planes and produces subtalar inversion
Inversion (kinesiology)
Inversion is the movement of the sole towards the median plane .Tibialis anterior and tibialis posterior invert. Some sources also state that the triceps surae and extensor hallucis longus invert....
and eversion
Eversion (kinesiology)
Eversion is the movement of the sole of the foot away from the median plane. It occurs at the subtalar joint.Peroneus longus and peroneus brevis evert. Both muscles are innervated by the superficial fibular nerve....
. Along with the transverse tarsal joint (i.e. talonavicular and calcaneocuboid joint), the subtalar joint transforms tibia
Tibia
The tibia , shinbone, or shankbone is the larger and stronger of the two bones in the leg below the knee in vertebrates , and connects the knee with the ankle bones....
l rotation into forefoot supination
Supination
Supination is a position of either the forearm or foot; in the forearm when the palm faces anteriorly, or faces up . Supination in the foot occurs when a person appears "bow-legged" with their weight supported primarily on the anterior of their feet.The hand is supine in the anatomical position...
and pronation
Pronation
In anatomy, pronation is a rotational movement of the forearm at the radioulnar joint, or of the foot at the subtalar and talocalcaneonavicular joints. For the forearm, when standing in the anatomical position, pronation will move the palm of the hand from an anterior-facing position to a...
.
The axis of rotation in the joint is directed upward 42 degrees from the horizontal plane and 16 degrees medially from the midline of the foot.
However, together, the subtalar facets form a screw or Archimedean spiral
Archimedean spiral
The Archimedean spiral is a spiral named after the 3rd century BC Greek mathematician Archimedes. It is the locus of points corresponding to the locations over time of a point moving away from a fixed point with a constant speed along a line which rotates with constant angular velocity...
, right-handed in the right foot, about which subtalar motion occurs. So, during subtalar inversion, the calcaneus also rotates clockwise and translates forward along the axis of the screw.
Average subtalar motion is 20-30 degrees inversion and 5-10 degrees eversion. Functional motion during the gait cycle is 10-15 degrees (the heel strikes the ground in slight inversion followed by quick eversion).
The talonavicular
Talocalcaneonavicular articulation
The talocalcaneonavicular articulation is a ball and socket joint: the rounded head of the talus being received into the concavity formed by the posterior surface of the navicular, the anterior articular surface of the calcaneus, and the upper surface of the plantar calcaneonavicular ligament.There...
and calcaneocuboid joints (i.e. between the talus and navicular bones, and the calcaneus and cuboid bones) form the so called transverse tarsal joint
Transverse tarsal joint
The transverse tarsal joint or midtarsal joint is formed by the articulation of the calcaneus with the cuboid, and the articulation of the talus with the navicular....
or Chopart's
François Chopart
François Chopart was a French surgeon born in Paris.He was trained in medicine at the Hôtel-Dieu, Pitié and the Bicêtre hospitals...
joint. It has two axes of motion.
Inversion and eversion occur about a longitudinal axis oriented 15 degrees upward from the horizontal plane and 9 degrees medially from the longitudinal axis of the foot.
Flexion and extension occur primarily about an oblique axis oriented 52 degrees upward from the horizontal plane and 57 degrees anteromedially (forward-inward).
In vitro
In vitro
In vitro refers to studies in experimental biology that are conducted using components of an organism that have been isolated from their usual biological context in order to permit a more detailed or more convenient analysis than can be done with whole organisms. Colloquially, these experiments...
talonavicular motion is 7 degrees flexion-extension and 17 degrees pronation-supination; while calcaneocuboid motion is 2 degrees flexion-extension and 7 degrees pronation-supination.
The motions of the subtalar and transverse talar joints interact to make the foot either flexible or rigid. With the subtalar joint in eversion, the two joints of the transverse joint are parallel, which make movements in this joint possible. With the subtalar joint in inversion, the axes of the transverse joint are convergent, movements in this joint are thus locked and the midfoot rigid.

In primitive tetrapod
Tetrapod
Tetrapods are vertebrate animals having four limbs. Amphibians, reptiles, birds and mammals are all tetrapods; even snakes and other limbless reptiles and amphibians are tetrapods by descent. The earliest tetrapods evolved from the lobe-finned fishes in the Devonian...
s, such as Trematops
Trematopsidae
Trematopidae is a family of Temnospondyli.-External links:*...
, the tarsus consists of three rows of bones. There are three proximal tarsals, the tibiale, intermedium, and fibulare, named for their points of articulation with the bones of the lower limb. These are followed by a second row of four bones, referred to as the centralia (singular: centrale), and then a row of five distal tarsals, each articulating with a single metatarsal. In the great majority of tetrapods, including all of those alive today, this simple pattern is modified by the loss and fusion of some of the bones.

In reptiles and mammals, there are normally just two proximal tarsals, the calcaneus (equivalent to the amphibian fibulare) and the talus (probably derived from a fusion of multiple bones). In mammals, including humans, the talus forms a hinge joint with the tibia, a feature especially well developed in the artiodactyls. The calcaneus is also modified, forming a heel for the attachment of the Achilles tendon
Achilles tendon
The Achilles tendon , also known as the calcaneal tendon or the tendo calcaneus, is a tendon of the posterior leg. It serves to attach the plantaris, gastrocnemius and soleus muscles to the calcaneus bone.- Anatomy :The Achilles is the tendonous extension of 3 muscles in the lower leg:...
. Neither of these adaptations is found in reptiles, which have a relatively simple structure to both bones.

The fifth distal tarsal disappears relatively early in evolution, with the remainder becoming the cuneiform and cuboid bones. Reptiles usually retain two centralia, while mammals typically have only one (the navicular).

In birds, the tarsus has disappeared, with the proximal tarsals having fused with the tibia, the centralia having disappeared, and the distal bones having fused with the metatarsals to form a single tarsometatarsus
Tarsometatarsus
The tarsometatarsus is a bone that is found in the lower leg of certain tetrapods, namely birds.It is formed from the fusion of several bones found in other types of animals, and homologous to the mammalian tarsal and metatarsal bones...
bone, effectively giving the leg a third segment.