Menzel Bourguiba is an important town for economic reasons. Its economy is based mainly around metallurgy
Metallurgy
Metallurgy is a domain of materials science that studies the physical and chemical behavior of metallic elements, their intermetallic compounds, and their mixtures, which are called alloys. It is also the technology of metals: the way in which science is applied to their practical use...
. It was founded as a naval installation during the period of French
France
The French Republic , The French Republic , The French Republic , (commonly known as France , is a unitary semi-presidential republic in Western Europe with several overseas territories and islands located on other continents and in the Indian, Pacific, and Atlantic oceans. Metropolitan France...
rule, because of its strategic location, in between two lakes: The inland Ichkeul Lake
Ichkeul Lake
Ichkeul Lake is a lake in northern Tunisia near the shore of the Mediterranean Sea. The lake and wetlands of Ichkeul National Park are an important stopping-over point for hundreds of thousands of migrating birds each year. Among the lake's visitors are ducks, geese, storks, and pink flamingoes...
on the west, and Bizerte Lake on the east, which connects to the Mediterranean Sea
Mediterranean Sea
The Mediterranean Sea is a sea connected to the Atlantic Ocean surrounded by the Mediterranean region and almost completely enclosed by land: on the north by Anatolia and Europe, on the south by North Africa, and on the east by the Levant...
by the Bizerte canal.

Its most important economical activity is the ailing Tunisian state-owned shipyard
Shipyard
Shipyards and dockyards are places which repair and build ships. These can be yachts, military vessels, cruise liners or other cargo or passenger ships. Dockyards are sometimes more associated with maintenance and basing activities than shipyards, which are sometimes associated more with initial...
. The yard has seen its workforce decline, after the high level of activity in the 1970s and 1980s, when Tunisia had a larger merchant fleet and when the Soviet Union
Soviet Union
The Soviet Union , officially the Union of Soviet Socialist Republics , was a constitutionally socialist state that existed in Eurasia between 1922 and 1991....
used Menzel Bourguiba to drydock its ships. At that time, the yard employed over 1,300 people. It has recently been bought by a French ship repair company, Compagnie Marseille Réparation.

During the time of the French colonization of Tunisia (1881-1956), Menzel Bourguiba was named Ferryville which refers to a French minister in this period, Jules Ferry
Jules Ferry
Jules François Camille Ferry was a French statesman and republican. He was a promoter of laicism and colonial expansion.- Early life :Born in Saint-Dié, in the Vosges département, France, he studied law, and was called to the bar at Paris in 1854, but soon went into politics, contributing to...
. 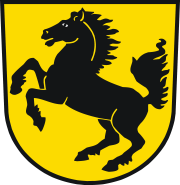 Germany
Germany
Germany , officially the Federal Republic of Germany , is a federal parliamentary republic in Europe. The country consists of 16 states while the capital and largest city is Berlin. Germany covers an area of 357,021 km2 and has a largely temperate seasonal climate...
.