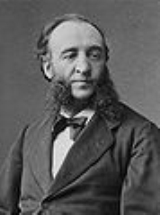 Overview
Jules François Camille Ferry (ʒyl feʁi; 5 April 1832 17 March 1893) was a French statesman and republican. He was a promoter of laicism and colonial expansion.
Born in Saint-Dié
Saint-Dié-des-Vosges
Saint-Dié-des-Vosges, commonly referred to as Saint-Dié, is a commune in the Vosges department in Lorraine in northeastern France.It is a sub-prefecture of the department.-Geography:...
, in the Vosges
Vosges
Vosges is a French department, named after the local mountain range. It contains the hometown of Joan of Arc, Domrémy.-History:The Vosges department is one of the original 83 departments of France, created on February 9, 1790 during the French Revolution. It was made of territories that had been...
département, France
France
The French Republic , The French Republic , The French Republic , (commonly known as France , is a unitary semi-presidential republic in Western Europe with several overseas territories and islands located on other continents and in the Indian, Pacific, and Atlantic oceans. Metropolitan France...
, he studied law
Law
Law is a system of rules and guidelines which are enforced through social institutions to govern behavior, wherever possible. It shapes politics, economics and society in numerous ways and serves as a social mediator of relations between people. Contract law regulates everything from buying a bus...
, and was called to the bar at Paris
Paris
Paris is the capital and largest city in France, situated on the river Seine, in northern France, at the heart of the Île-de-France region...
in 1854, but soon went into politics
Politics
Politics is a process by which groups of people make collective decisions. The term is generally applied to the art or science of running governmental or state affairs, including behavior within civil governments, but also applies to institutions, fields, and special interest groups such as the...
, contributing to various newspapers, particularly to Le Temps
Le Temps (Paris)
Le Temps was one of Paris's most important daily newspapers from April 25, 1861 to November 30, 1942.Founded in 1861 by Edmund Chojecki and Auguste Nefftzer, Le Temps was under Nefftzer's direction for ten years, when Adrien Hébrard took his place...
. He attacked the Second French Empire
Second French Empire
The Second French Empire or French Empire was the Imperial Bonapartist regime of Napoleon III from 1852 to 1870, between the Second Republic and the Third Republic, in France.-Rule of Napoleon III:...
with great violence, directing his opposition especially against Baron Haussmann
Baron Haussmann
Georges-Eugène Haussmann, commonly known as Baron Haussmann , was a French civic planner whose name is associated with the rebuilding of Paris...
, prefect of the Seine
Seine (département)
Seine was a département of France encompassing Paris and its immediate suburbs. Its préfecture was Paris and its official number was 75. The Seine département was abolished in 1968 and its territory divided among four new départements....
département.