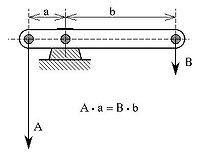 Consider lifting a weight with rope and pulleys. A rope looped through a pulley attached to a fixed spot, e.g. a barn roof rafter, and attached to the weight is called a single pulley. It has an MA = 1 (assuming frictionless bearings in the pulley), meaning no mechanical advantage (or disadvantage) however advantageous the change in direction may be.

A single movable pulley has an MA of 2 (assuming frictionless bearings in the pulley). Consider a pulley attached to a weight being lifted. A rope passes around it, with one end attached to a fixed point above, e.g. a barn roof rafter, and a pulling force is applied upward to the other end with the two lengths parallel. In this situation the distance the lifter must pull the rope becomes twice the distance the weight travels, allowing the force applied to be halved. Note: if an additional pulley is used to change the direction of the rope, e.g. the person doing the work wants to stand on the ground instead of on a rafter, the mechanical advantage is not increased.

Here are examples where the fixed point is not obvious:

The theoretical mechanical advantage for a screw can be calculated using the following equation: