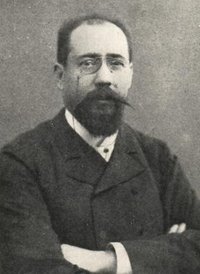 Maurice Rouvier was a French
France
The French Republic , The French Republic , The French Republic , (commonly known as France , is a unitary semi-presidential republic in Western Europe with several overseas territories and islands located on other continents and in the Indian, Pacific, and Atlantic oceans. Metropolitan France...
statesman
Statesman
A statesman is usually a politician or other notable public figure who has had a long and respected career in politics or government at the national and international level. As a term of respect, it is usually left to supporters or commentators to use the term...
.

He was born in Aix-en-Provence
Aix-en-Provence
Aix , or Aix-en-Provence to distinguish it from other cities built over hot springs, is a city-commune in southern France, some north of Marseille. It is in the region of Provence-Alpes-Côte d'Azur, in the département of Bouches-du-Rhône, of which it is a subprefecture. The population of Aix is...
, and spent his early career in business at Marseille
Marseille
Marseille , known in antiquity as Massalia , is the second largest city in France, after Paris, with a population of 852,395 within its administrative limits on a land area of . The urban area of Marseille extends beyond the city limits with a population of over 1,420,000 on an area of...
. He supported Léon Gambetta
Léon Gambetta
Léon Gambetta was a French statesman prominent after the Franco-Prussian War.-Youth and education:He is said to have inherited his vigour and eloquence from his father, a Genovese grocer who had married a Frenchwoman named Massabie. At the age of fifteen, Gambetta lost the sight of his right eye...
's candidature there in 1867, and in 1870 he founded an anti-imperial journal, L'Egalité. Becoming secretary general of the prefecture of Bouches-du-Rhône in. 1870-71, he refused the office of prefect. In July 1871 he was returned to the National Assembly for Marseille at a by-election, and voted steadily with the Republican party. He became a recognized authority on finance, and repeatedly served on the Budget Commission as reporter or president.

At the general elections of 1881 after the fall of the Jules Ferry
Jules Ferry
Jules François Camille Ferry was a French statesman and republican. He was a promoter of laicism and colonial expansion.- Early life :Born in Saint-Dié, in the Vosges département, France, he studied law, and was called to the bar at Paris in 1854, but soon went into politics, contributing to...
cabinet he was returned to the chamber on a programme which included the separation of Church and State, a policy of decentralization, and the imposition of an income-tax. He then joined Gambetta's cabinet as minister of commerce and the colonies, and in the 1883-85 cabinet of Jules Ferry he held the same office. He became premier and minister of finance on 31 May 1887, with the support of the moderate republican groups, the Radicals holding aloof in support of General Boulanger, who began a violent agitation against the government.

Then came the scandal of the decorations in which President Grévy's son-in-law figured, and the Rouvier cabinet fell in its attempt to screen the president. Rouvier's opposition in his capacity of president of the Budget Commission was one of the causes of the defeat of Charles Floquet
Charles Floquet
-Biography:He was born at Saint-Jean-Pied-de-Port . He studied law in Paris, and was called to the bar in 1851. The coup d'état of that year aroused the strenuous opposition of Floquet, who had, while yet a student, given proof of his republican sympathies by taking part in the fighting of 1848...
's cabinet in February 1889. In the new Tirard ministry formed to combat the Boulangist agitation, he was minister of finance. He kept the same post in the Freycinet, Loubet
Émile Loubet
Émile François Loubet was a French politician and the 8th President of France.-Early life:He was born the son of a peasant proprietor and mayor of Marsanne . Admitted to the Parisian bar in 1862, he took his doctorate in law the next year...
and Ribot
Alexandre Ribot
Alexandre-Félix-Joseph Ribot was a French politician, four times Prime Minister.-Biography:He was born in Saint-Omer, Pas-de-Calais.After a brilliant academic career at the University of Paris, where he was lauréat of the faculty of law, he rapidly made his mark at the bar...
cabinets of 1890-93. His relations with Cornelius Herz
Cornelius Herz
Cornelius Herz was born in Besançon, France on September 3, 1845 and he died in Bournemouth, England on July 6, 1898. He was a French-American doctor, electrician, businessman and famous politician of Jewish German origin, implicated in the Panama scandals....
and the baron de Reinach compelled his retirement from the Ribot cabinet at the time of the Panama scandals
Panama scandals
The Panama scandals was a corruption affair that broke out in the French Third Republic in 1892, linked to the building of the Panama Canal...
in December 1892.

Again, in 1902, he became minister of finance, after nearly ten years in exclusion from office, in the Radical cabinet of Émile Combes
Émile Combes
Émile Combes was a French statesman who led the Bloc des gauches's cabinet from June 1902 – January 1905.-Biography:Émile Combes was born in Roquecourbe, Tarn. He studied for the priesthood, but abandoned the idea before ordination. His anti-clericalism would later lead him into becoming a...
; and on the fall of the Combes ministry in January 1905 he was invited by the president to form a new ministry. In this cabinet he at first held the ministry of finance. In his initial declaration to the chamber the new premier had declared his intention of continuing the policy of the late cabinet, pledging the new ministry to a policy of conciliation, to the consideration of old age pensions, an income-tax, separation of Church and State. Public attention, however, was chiefly concentrated on foreign policy. During the Combes ministry Theophile Delcassé
Théophile Delcassé
Théophile Delcassé was a French statesman.-Biography:He was born at Pamiers, in the Ariège département...
had come to a secret understanding with Spain
Spain
Spain , officially the Kingdom of Spain languages]] under the European Charter for Regional or Minority Languages. In each of these, Spain's official name is as follows:;;;;;;), is a country and member state of the European Union located in southwestern Europe on the Iberian Peninsula...
on the Moroccan question, and had established an understanding with England. His policy had aroused German jealousy, which became evident in the asperity with which the question of Morocco was handled in Berlin
Berlin
Berlin is the capital city of Germany and is one of the 16 states of Germany. With a population of 3.45 million people, Berlin is Germany's largest city. It is the second most populous city proper and the seventh most populous urban area in the European Union...
.

At a cabinet meeting on 5 June Rouvier is said to have reproached the Foreign Minister with imprudence over Morocco, and after a heated discussion Delcassé resigned. Rouvier himself took the portfolio of foreign affairs at this crucial point. After critical negotiations, he secured on 8 July an agreement with Germany accepting the international conference proposed by the sultan of Morocco on the assurance that Germany would recognize the special nature of the interest of France in maintaining order on the frontier of her Algerian empire. Lengthy discussions resulted in a new convention in September, which contained the programme of the proposed conference, and in December Rouvier was able to make a statement of the whole proceedings in the chamber, which received the assent of all parties. Rouvier's government did not long survive the presidential election of 1906. The disturbances arising in connection with the Separation Law were skillfully handled by Georges Clemenceau
Georges Clemenceau
Georges Benjamin Clemenceau was a French statesman, physician and journalist. He served as the Prime Minister of France from 1906 to 1909, and again from 1917 to 1920. For nearly the final year of World War I he led France, and was one of the major voices behind the Treaty of Versailles at the...
to discredit the ministry, which gave place to a cabinet under the direction of Sarrien.
He died in Neuilly-sur-Seine
Neuilly-sur-Seine
Neuilly-sur-Seine is a commune in the western suburbs of Paris, France. It is located from the center of Paris.Although Neuilly is technically a suburb of Paris, it is immediately adjacent to the city and directly extends it. The area is composed of mostly wealthy, select residential...
.