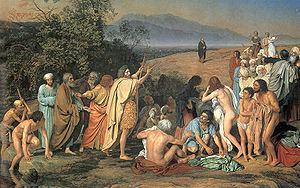 Matthew 3:13 is the thirteenth verse of the third chapter of the Gospel of Matthew
Gospel of Matthew
The Gospel According to Matthew is one of the four canonical gospels, one of the three synoptic gospels, and the first book of the New Testament. It tells of the life, ministry, death, and resurrection of Jesus of Nazareth...
in the New Testament
New Testament
The New Testament is the second major division of the Christian biblical canon, the first such division being the much longer Old Testament....
. The verse introduces the section describing the baptism
Baptism
In Christianity, baptism is for the majority the rite of admission , almost invariably with the use of water, into the Christian Church generally and also membership of a particular church tradition...
of Jesus
Jesus
Jesus of Nazareth , commonly referred to as Jesus Christ or simply as Jesus or Christ, is the central figure of Christianity...
by John the Baptist
John the Baptist
John the Baptist was an itinerant preacher and a major religious figure mentioned in the Canonical gospels. He is described in the Gospel of Luke as a relative of Jesus, who led a movement of baptism at the Jordan River...
.

In the King James Version of the Bible the text reads:

Then cometh Jesus from Galilee to
Jordan unto John, to be baptized of him.

Then Jesus came from Galilee to the
Jordan to John, to be baptized by him.

For a collection of other versions see BibRef Matthew 3:13

Jesus
Jesus
Jesus of Nazareth , commonly referred to as Jesus Christ or simply as Jesus or Christ, is the central figure of Christianity...
reenters the narrative for the first time since Matthew 2:23
Matthew 2:23
Matthew 2:23 is the twenty-third verse of the second chapter of the Gospel of Matthew in the New Testament. The young Jesus and the Holy Family have just returned from Egypt and in this verse are said to settle in Nazareth. This is the final verse of Matthew's infancy narrative...
. In that verse he moves to Nazareth
Nazareth
Nazareth is the largest city in the North District of Israel. Known as "the Arab capital of Israel," the population is made up predominantly of Palestinian Arab citizens of Israel...
in Galilee
Galilee
Galilee , is a large region in northern Israel which overlaps with much of the administrative North District of the country. Traditionally divided into Upper Galilee , Lower Galilee , and Western Galilee , extending from Dan to the north, at the base of Mount Hermon, along Mount Lebanon to the...
. In this verse he returns from that region to Judea
Judea
Judea or Judæa was the name of the mountainous southern part of the historic Land of Israel from the 8th century BCE to the 2nd century CE, when Roman Judea was renamed Syria Palaestina following the Jewish Bar Kokhba revolt.-Etymology:The...
. A journey of about 70 miles (112.7 km) .

Clarke notes that according to tradition Jesus was baptized in the Jordan River five miles south of the Allenby Bridge
Allenby Bridge
The Allenby Bridge , also known as the King Hussein Bridge , is a bridge that crosses the Jordan River, and connects Jericho in the West Bank to the country of Jordan...
, today the site of an Greek Orthodox monastery dedicated to John the Baptist. The area is currently in a military zone and is closed to visitors. This verse differs considerably from the description of the same event in Luke 3:21. In Luke Jesus is one of the crowd that has come to see John and it does not specify who baptized Jesus. The version at Mark 1:9 also does not give many details. This verse is much more specific, describing Jesus seeking out John to be baptized. According to Hill the relationship between Jesus and John the Baptist was one of the most important issues of first century Christianity and Matthew is very specific in these matters.
The source of this article is wikipedia, the free encyclopedia.  The text of this article is licensed under the GFDL.