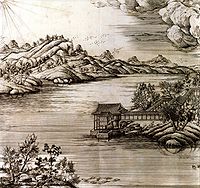 Matteo Ripa was an Italian
Italy
Italy , officially the Italian Republic languages]] under the European Charter for Regional or Minority Languages. In each of these, Italy's official name is as follows:;;;;;;;;), is a unitary parliamentary republic in South-Central Europe. To the north it borders France, Switzerland, Austria and...
priest who was sent as a missionary to China
China
Chinese civilization may refer to:* China for more general discussion of the country.* Chinese culture* Greater China, the transnational community of ethnic Chinese.* History of China* Sinosphere, the area historically affected by Chinese culture...
by Propaganda Fide, and between 1711 to 1723 worked as a painter and copper
Copper
Copper is a chemical element with the symbol Cu and atomic number 29. It is a ductile metal with very high thermal and electrical conductivity. Pure copper is soft and malleable; an exposed surface has a reddish-orange tarnish...
-engraver at the Manchu
Manchu
The Manchu people or Man are an ethnic minority of China who originated in Manchuria . During their rise in the 17th century, with the help of the Ming dynasty rebels , they came to power in China and founded the Qing Dynasty, which ruled China until the Xinhai Revolution of 1911, which...
court of the well-known Kangxi Emperor
Kangxi Emperor
The Kangxi Emperor ; Manchu: elhe taifin hūwangdi ; Mongolian: Энх-Амгалан хаан, 4 May 1654 –20 December 1722) was the fourth emperor of the Qing Dynasty, the first to be born on Chinese soil south of the Pass and the second Qing emperor to rule over China proper, from 1661 to 1722.Kangxi's...
.

In December 1723 Matteo Ripa left Beijing for Europe, travelling with four young Chinese Christians (Giovanni Gu (ca. 1700-1763), Giovanni Yin (ca. 1704-1735), Philipo Huang (ca. 1711 - 1776), and Lucio Wu (ca. 1712 - 1763)) and their Chinese teacher. His plan was to bring the youths to Naples, train them as priests, and let them go back to China as missionaries. This was the foundation of the "Collegio dei Cinesi
Naples Eastern University
The Naples Eastern University is a university located in Naples, Italy. It was founded in 1732 and is organized in 4 Faculties...
" ("Chinese College"), sanctioned by Pope Clement XII
Pope Clement XII
Pope Clement XII , born Lorenzo Corsini, was Pope from 12 July 1730 to 6 February 1740.Born in Florence, the son of Bartolomeo Corsini, Marquis of Casigliano and his wife Isabella Strozzi, sister of the Duke of Bagnuolo, Corsini had been an aristocratic lawyer and financial manager under preceding...
to help the propagation of Christianity
Christianity
Christianity is a monotheistic religion based on the life and teachings of Jesus as presented in canonical gospels and other New Testament writings...
in China.

All six travelers reached Italy by the way of Canton
Guangzhou
Guangzhou , known historically as Canton or Kwangchow, is the capital and largest city of the Guangdong province in the People's Republic of China. Located in southern China on the Pearl River, about north-northwest of Hong Kong, Guangzhou is a key national transportation hub and trading port...
and London
London
London is the capital city of :England and the :United Kingdom, the largest metropolitan area in the United Kingdom, and the largest urban zone in the European Union by most measures. Located on the River Thames, London has been a major settlement for two millennia, its history going back to its...
, where George I of England received them at his palace. Setting up a Chinese College in Naples turned out to be harder than Ripa thought, but eventually it was accomplished in 1732.

All four Ripa's Chinese seminarians were eventually ordained (Giovanni Gu and Giovanni Yin in 1734, Philipo Huang and Lucio Wu in 1741), but only three made it back to China.

Ripa several times severely punished Lucio Wu for insubordination, and eventually, in June 1744, Ripa asked Propaganda not to send the young priest to position in China because of his "immaturity". Devastated, Lucio soon fled the college and disappeared, until Ripa found him in the monastery of Monte Cassino
Monte Cassino
Monte Cassino is a rocky hill about southeast of Rome, Italy, c. to the west of the town of Cassino and altitude. St. Benedict of Nursia established his first monastery, the source of the Benedictine Order, here around 529. It was the site of Battle of Monte Cassino in 1944...
the following spring. Subject to disciplinary punishments, he soon fled again. He was arrested in September 1745 in Senigallia
Senigallia
Senigallia is a comune and port town on Italy's Adriatic coast, 25 km by rail north of Ancona, in the Marche region, province of Ancona....
, after travelling with forged priest's credentials throughout the Papal States
Papal States
The Papal State, State of the Church, or Pontifical States were among the major historical states of Italy from roughly the 6th century until the Italian peninsula was unified in 1861 by the Kingdom of Piedmont-Sardinia .The Papal States comprised territories under...
, and occasionally celebrating a Mass at various churches. This time, Lucio was sentenced to a year of imprisonment in the Chinese College. But Ripa felt that this was not enough. In a letter dated March 29, 1746 - the day of his death - Ripa asked Propaganda for life imprisonment for the Chinese priest. The cardinals obliged, and Lucio was imprisoned in Rome's Castel Sant'Angelo
Castel Sant'Angelo
The Mausoleum of Hadrian, usually known as the Castel Sant'Angelo, is a towering cylindrical building in Parco Adriano, Rome, Italy. It was initially commissioned by the Roman Emperor Hadrian as a mausoleum for himself and his family...
. His pleas for pardon were rejected by Propaganda, especially as Ripa's successor at the Chinese College, Fr. Fatigati, supported Ripa's negative assessment of Lucio. The Chinese priest died in Italy in 1763.