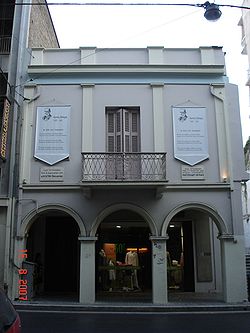 Matilde Serao was a Greek
Greece
Greece , officially the Hellenic Republic , and historically Hellas or the Republic of Greece in English, is a country in southeastern Europe....
-born Italian
Italy
Italy , officially the Italian Republic languages]] under the European Charter for Regional or Minority Languages. In each of these, Italy's official name is as follows:;;;;;;;;), is a unitary parliamentary republic in South-Central Europe. To the north it borders France, Switzerland, Austria and...
journalist
Journalist
A journalist collects and distributes news and other information. A journalist's work is referred to as journalism.A reporter is a type of journalist who researchs, writes, and reports on information to be presented in mass media, including print media , electronic media , and digital media A...
and novelist. She was the founder and editor of Il Mattino
Il Mattino
Il Mattino is an Italian daily newspaper, founded in 1892 in Naples, Italy, by the journalists Eduardo Scarfoglio and Matilde Serao.Based on 2008 survey data from Accertamenti Diffusione Stampa, Il Mattino is the most read daily newspaper in Campania, and one of the most read in southern...
, and she also wrote several novels.

Matilde was born in the Greek city of Patras
Patras
Patras , ) is Greece's third largest urban area and the regional capital of West Greece, located in northern Peloponnese, 215 kilometers west of Athens...
to an Italian father and a Greek mother. Her father had emigrated to Greece for political reasons.

She worked as a schoolmistress in Naples
Naples
Naples is a city in Southern Italy, situated on the country's west coast by the Gulf of Naples. Lying between two notable volcanic regions, Mount Vesuvius and the Phlegraean Fields, it is the capital of the region of Campania and of the province of Naples...
, and later described those years of laborious poverty in the preface to a book of short stories called Leggende Napolitane (1881). She first gained renown as a result of the publishing of her Novelle in Il Piccolo, a newspaper of Rocco de Zerbi, and later by her first novel, Fantasia (1883), which definitely established her as a writer full of feeling and analytical subtlety.

She spent the years between 1880 and 1886 in Rome
Rome
Rome is the capital of Italy and the country's largest and most populated city and comune, with over 2.7 million residents in . The city is located in the central-western portion of the Italian Peninsula, on the Tiber River within the Lazio region of Italy.Rome's history spans two and a half...
, where she published her next five volumes of short stories and novels, all dealing with ordinary Italian, and especially Roman, life, and distinguished by great accuracy of observation and depth of insight: Cuore infermo (1881), Fior di passione (1883), La conquista di Roma (1885), La Virtù di checchina (1884), and Piccole anime (1883).

With her husband, Edoardo Scarfoglio
Edoardo Scarfoglio
Edoardo Scarfoglio was an Italian author and journalist, one of the early practitioners in Italian fiction of realism, a style of writing that embraced direct, colloquial language and rejected the more ornate style of earlier Italian literature.-Biography:Scarfoglio was born in Paganica, in the...
, she founded Il Corriere di Roma, the first Italian attempt to model a daily journal along the lines of the Parisian press. The paper was short lived, and after its demise Serao established herself in Naples where she edited Il Corriere di Napoli. In 1891 she founded Il Mattino
Il Mattino
Il Mattino is an Italian daily newspaper, founded in 1892 in Naples, Italy, by the journalists Eduardo Scarfoglio and Matilde Serao.Based on 2008 survey data from Accertamenti Diffusione Stampa, Il Mattino is the most read daily newspaper in Campania, and one of the most read in southern...
, which became the most important and most widely read daily paper of southern Italy. The stress of a journalistic career in no way limited her literary activity; between 1890 and 1902 she produced Il paese di cuccagna, Il ventre di Napoli, Addio amore, All'erta sentinella, Castigo, La ballerina, Suor Giovanna della Croce, Paese di Gesù, novels in which the character of the people is rendered with sensitive power and sympathetic breadth of spirit. Most of these have been translated into English.

Matilde Serao is in a category of her own. She was a naturalist
Naturalism (literature)
Naturalism was a literary movement taking place from the 1880s to 1940s that used detailed realism to suggest that social conditions, heredity, and environment had inescapable force in shaping human character...
, but her naturalism should be understood in a much wider sense than that which is generally given to it. She was a naturalist because her books reflect life with the utmost simplicity of means, sometimes with an utter neglect of means, and at the same time she is an idealist through her deep sense of the beauty and nobility which humanity can attain, and to which her writings continually aspire. All her work is truly and profoundly Italian; it is the literature of a great mass of individuals, rather than of one peculiarly accentuated individual; the joy and pain of a whole class rather than the perplexities of a unique case or type pulsates through her pages. Serao's defects are always defects of style; her verbosity often clogs the movement of her narrative and mars the artistic effect of her always animated pages. Like Fogazzaro
Antonio Fogazzaro
Antonio Fogazzaro was an Italian novelist.-Biography:Fogazzaro was born in Vicenza to a rich family.In 1864 he got a law degree in Turin...
's, her speech is criticized as being too closely related to the popular speech of her particular region.
The source of this article is wikipedia, the free encyclopedia.  The text of this article is licensed under the GFDL.