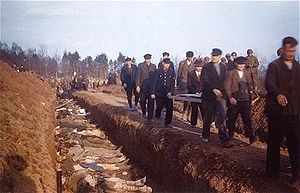 A mass grave is a grave containing multiple number of human corpses, which may or may not be identified prior to burial. There is no strict definition of the minimum number of bodies required to constitute a mass grave, although the United Nations defines a mass grave as a burial site which contains three or more victims of execution.

Mass graves are an infamous variation on common burial
Common burial
Common burial, also known as mass interment is the burial of several bodies in one collective grave. Human infants, particularly premature ones, are sometimes given a common burial when they die due to loss of pregnancy, stillbirth, or early infant death...
, still occasionally practiced today under normal circumstances. Mass or communal burial was a common practice before the development of a dependable crematory chamber by an Italian named Brunetti
Brunetti
Brunetti is a surname may refer to:* Argentina Brunetti , actress and writer* August Brunetti-Pisano , Austrian composer* Enrico Adelelmo Brunetti , British musician and entomologist...
in 1873.

In Paris, the practice of mass burial, and in particular, the condition of the infamous cemetery Des Innocents, led Louis XVI to eliminate Parisian cemeteries. The remains were removed and placed in the Paris underground forming the early Catacombs
Catacombs of Paris
The Catacombs of Paris or Catacombes de Paris are an underground ossuary in Paris, France. Located south of the former city gate , the ossuary holds the remains of about 6 million people and fills a renovated section of caverns and tunnels that are the remains of Paris' stone mines...
. Les Innocents alone had 6,000,000 dead to remove. Burial commenced outside of the city limits in what is now Père Lachaise cemetery.

Mass graves are usually created after a large number of people die or are killed, and there is a desire to bury the corpses quickly for sanitation concerns. In disaster
Disaster
A disaster is a natural or man-made hazard that has come to fruition, resulting in an event of substantial extent causing significant physical damage or destruction, loss of life, or drastic change to the environment...
s, mass graves are used for infection
Infection
An infection is the colonization of a host organism by parasite species. Infecting parasites seek to use the host's resources to reproduce, often resulting in disease...
and disease
Disease
A disease is an abnormal condition affecting the body of an organism. It is often construed to be a medical condition associated with specific symptoms and signs. It may be caused by external factors, such as infectious disease, or it may be caused by internal dysfunctions, such as autoimmune...
control.

The debate surrounding mass graves amongst epidemiologists includes whether or not, in a natural disaster, to leave corpses for individual traditional burials, or to bury corpses in mass graves: for example, if an epidemic occurs during winter, flies are less likely to infest corpses, reducing the risk of outbreaks of dysentery
Dysentery
Dysentery is an inflammatory disorder of the intestine, especially of the colon, that results in severe diarrhea containing mucus and/or blood in the faeces with fever and abdominal pain. If left untreated, dysentery can be fatal.There are differences between dysentery and normal bloody diarrhoea...
, diarrhea
Diarrhea
Diarrhea , also spelled diarrhoea, is the condition of having three or more loose or liquid bowel movements per day. It is a common cause of death in developing countries and the second most common cause of infant deaths worldwide. The loss of fluids through diarrhea can cause dehydration and...
, diphtheria
Diphtheria
Diphtheria is an upper respiratory tract illness caused by Corynebacterium diphtheriae, a facultative anaerobic, Gram-positive bacterium. It is characterized by sore throat, low fever, and an adherent membrane on the tonsils, pharynx, and/or nasal cavity...
, or tetanus
Tetanus
Tetanus is a medical condition characterized by a prolonged contraction of skeletal muscle fibers. The primary symptoms are caused by tetanospasmin, a neurotoxin produced by the Gram-positive, rod-shaped, obligate anaerobic bacterium Clostridium tetani...
, so the use of mass graves is less important. Recent research indicates that the health risks from dead bodies
Health risks from dead bodies
The health risks of dead bodies are dangers related to the improper preparation and disposal of cadavers. While normal circumstances allow cadavers to be quickly embalmed, cremated, or buried, natural and man-made disasters can quickly overwhelm and/or interrupt the established protocols for...
in mass casualty events are very limited and that mass graves might cause more harm than good.

Although mass graves can be used during major conflicts, they are more usually seen after natural disasters such as a major famine
Famine
A famine is a widespread scarcity of food, caused by several factors including crop failure, overpopulation, or government policies. This phenomenon is usually accompanied or followed by regional malnutrition, starvation, epidemic, and increased mortality. Every continent in the world has...
, epidemic
Epidemic
In epidemiology, an epidemic , occurs when new cases of a certain disease, in a given human population, and during a given period, substantially exceed what is expected based on recent experience...
, or natural disaster
Natural disaster
A natural disaster is the effect of a natural hazard . It leads to financial, environmental or human losses...
. In such cases, there is a breakdown of the social infrastructure that would enable proper identification and disposal of individual bodies.

Mass grave mapping teams have located 125 Khmer Rouge
Khmer Rouge
The Khmer Rouge literally translated as Red Cambodians was the name given to the followers of the Communist Party of Kampuchea, who were the ruling party in Cambodia from 1975 to 1979, led by Pol Pot, Nuon Chea, Ieng Sary, Son Sen and Khieu Samphan...
prison facilities and corresponding gravesites to date in Cambodia
Cambodia
Cambodia , officially known as the Kingdom of Cambodia, is a country located in the southern portion of the Indochina Peninsula in Southeast Asia...
while researching the Killing Fields. Many mass graves filled by communist insurgents
Insurgency
An insurgency is an armed rebellion against a constituted authority when those taking part in the rebellion are not recognized as belligerents...
with innocent civilian victims were discovered after the Massacre at Huế during the Vietnam War
Vietnam War
The Vietnam War was a Cold War-era military conflict that occurred in Vietnam, Laos, and Cambodia from 1 November 1955 to the fall of Saigon on 30 April 1975. This war followed the First Indochina War and was fought between North Vietnam, supported by its communist allies, and the government of...
.