Encyclopedia
Masjid al-Qiblatain (Mosque of the two Qiblas) is a mosque
Mosque
A mosque is a place of worship for followers of Islam. The word is likely to have entered the English language through French , from Portuguese , from Spanish , and from Berber , ultimately originating in — . The Arabic word masjid literally means a place of prostration...
in Medina
Medina
Medina , or ; also transliterated as Madinah, or madinat al-nabi "the city of the prophet") is a city in the Hejaz region of western Saudi Arabia, and serves as the capital of the Al Madinah Province. It is the second holiest city in Islam, and the burial place of the Islamic Prophet Muhammad, and...
that is historically important for Muslim
Muslim
A Muslim, also spelled Moslem, is an adherent of Islam, a monotheistic, Abrahamic religion based on the Quran, which Muslims consider the verbatim word of God as revealed to prophet Muhammad. "Muslim" is the Arabic term for "submitter" .Muslims believe that God is one and incomparable...
s as the place where the Islamic prophet Muhammad
Muhammad
Muhammad |ligature]] at U+FDF4 ;Arabic pronunciation varies regionally; the first vowel ranges from ~~; the second and the last vowel: ~~~. There are dialects which have no stress. In Egypt, it is pronounced not in religious contexts...
, leading the prayer, is said to have been commanded to change the direction of prayer (qibla
Qibla
The Qiblah , also transliterated as Qibla, Kiblah or Kibla, is the direction that should be faced when a Muslim prays during salah...
) from Jerusalem to Mecca
Mecca
Mecca is a city in the Hijaz and the capital of Makkah province in Saudi Arabia. The city is located inland from Jeddah in a narrow valley at a height of above sea level...
. Thus it uniquely contained two prayer niches (mihrab
Mihrab
A mihrab is semicircular niche in the wall of a mosque that indicates the qibla; that is, the direction of the Kaaba in Mecca and hence the direction that Muslims should face when praying...
s). Recently the mosque was renovated, removing the old prayer niche facing Jerusalem and leaving the one facing Mecca.

The Qiblatain Mosque is among the three earliest mosques in Islam's history, along with Quba Mosque
Quba Mosque
The Quba Mosque in the outlying environs of Medina in Saudi Arabia, is the oldest mosque in the world. Its first stones were positioned by the Islamic prophet Muhammad on his emigration from the city of Mecca to Medina and the mosque was completed by his companions...
and Al-Masjid al-Nabawi
Al-Masjid al-Nabawi
Al-Masjid al-Nabawi , often called the Prophet's Mosque, is a mosque situated in the city of Medina. As the final resting place of the Islamic prophet Muhammad, it is considered the second holiest site in Islam by Muslims and is one of the largest mosques in the world...
.

The name of the mosque goes back to the beginning of Islam when the companions of Muhammad named it after an event that took place. Muhammad was leading the prayer when he received a revelation from Allah instructing him to take the Kaaba as the Qiblah. According to traditional accounts, Muhammad, who had been facing Jerusalem during the prayer, upon receiving this revelation, immediately turned around to face Mecca, and those praying behind him also did so. After this, the mosque in which this incident occurred came to be known as Masjid al-Qiblatain (i.e. 'Mosque of the Two Qiblas'). Many pilgrims who go to Mecca for hajj often visit Medina where some end up visiting the notable Qiblatain because of its historic signficance.

Sahih Bukhari
Sahih Bukhari
Ṣaḥīḥ al-Bukhārī , as it is commonly referred to, is one of the six canonical hadith collections of Islam. These prophetic traditions, or hadith, were collected by the Persian Muslim scholar Muhammad ibn Ismail al-Bukhari, after being transmitted orally for generations. Muslims view this as one of...
says;

The mair prayer hall adopts rigid orthogonal geometry and symmetry which is accentuated by the use of twin minarets and twin domes. Living accommodations for the Imam, the Muezzin and the caretaker are discreetly grouped it one block to the west of the main structure. The difference in level at the southeast corner of the site has been exploited to incorporate a sub-basement level which serves as the ablutions area for worshippers. 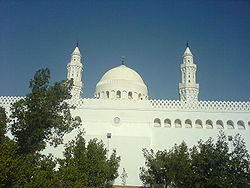 The main dome to the south is raised on a drum of clerestory windows which allow light to filter into the interior directly above the mihrab. The second, false dome is linked to the first by a small cross-vault to symbolise the transition from one qibla to another. Below it, a replica of the mihrab found in the lower chamber of the Dome of the Rock in Jerusalem reminds onlookers of the oldest extant mihrab of Islam. Externally, the architectural vocabulary is inspired by traditional elements and motifs in a deliberate effort to offer an authentic image for an historic site.

The mosque is located on the north-west of the city of Medina, on Khalid bin al-Waleed road. The mosque was initially maintained by Caliph Umar
Umar
`Umar ibn al-Khattāb c. 2 November , was a leading companion and adviser to the Islamic prophet Muhammad who later became the second Muslim Caliph after Muhammad's death....
ibn al-Khattāb. By the rise of the Ottoman empire the mosque was maintained by Sultan Suleiman the Magnificent
Suleiman the Magnificent
Suleiman I was the tenth and longest-reigning Sultan of the Ottoman Empire, from 1520 to his death in 1566. He is known in the West as Suleiman the Magnificent and in the East, as "The Lawgiver" , for his complete reconstruction of the Ottoman legal system...
who renovated and reconstructed it.