Encyclopedia
The Maschinengewehr 08, or MG08, was the German Army
German Army (German Empire)
The German Army was the name given the combined land forces of the German Empire, also known as the National Army , Imperial Army or Imperial German Army. The term "Deutsches Heer" is also used for the modern German Army, the land component of the German Bundeswehr...
's standard machine gun
Machine gun
A machine gun is a fully automatic mounted or portable firearm, usually designed to fire rounds in quick succession from an ammunition belt or large-capacity magazine, typically at a rate of several hundred rounds per minute....
in World War I
World War I
World War I , which was predominantly called the World War or the Great War from its occurrence until 1939, and the First World War or World War I thereafter, was a major war centred in Europe that began on 28 July 1914 and lasted until 11 November 1918...
and is an adoption of Hiram S. Maxim
Hiram Stevens Maxim
Sir Hiram Stevens Maxim was an American-born inventor who emigrated to England at the age of forty-one, although he remained an American citizen until he became a naturalized British subject in 1900. He was the inventor of the Maxim Gun – the first portable, fully automatic machine gun – and the...
's original 1884 Maxim Gun
Maxim gun
The Maxim gun was the first self-powered machine gun, invented by the American-born British inventor Sir Hiram Maxim in 1884. It has been called "the weapon most associated with [British] imperial conquest".-Functionality:...
. It was produced in a number of variants during the war. The MG 08 remained in service until the outbreak of World War II
World War II
World War II, or the Second World War , was a global conflict lasting from 1939 to 1945, involving most of the world's nations—including all of the great powers—eventually forming two opposing military alliances: the Allies and the Axis...
due to shortages of its successors, the MG 13 Dreyse and the MG34. It was retired from front-line service by 1942.

The Maschinengewehr 08 (or MG08)—so-named after 1908, its year of adoption—was a development of the license made Maschinengewehr 01. It could reach a firing rate of up to 400 rounds per minute using 250-round fabric belts of 7.9mm ammunition, although sustained firing would lead to overheating; it was water-cooled using a jacket around the barrel that held approximately one gallon
Gallon
The gallon is a measure of volume. Historically it has had many different definitions, but there are three definitions in current use: the imperial gallon which is used in the United Kingdom and semi-officially within Canada, the United States liquid gallon and the lesser used United States dry...
. Using a separate attachment sight with range calculator for indirect fire, the MG08 could be operated from cover. Additional telescopic sights were also developed and used in quantity during the war.

The MG08, like the Maxim Gun, operated on the basis of short barrel recoil and a toggle lock; once cocked and fired the MG08 would continue firing rounds until the trigger was released (or until all available ammunition was expended). Its practical range was estimated at some 2000 metres (2,187.2 yd) up to an extreme range of 3600 metres (3,937 yd). The MG08 was mounted on a sled mount that was ferried between locations either on carts or else carried above men's shoulders in the manner of a stretcher.

Pre-war production was by Deutsche Waffen und Munitionsfabriken
Deutsche Waffen und Munitionsfabriken
Deutsche Waffen- und Munitionsfabriken Aktien-Gesellschaft , known as DWM, was an arms company in Imperial Germany created in 1896 when Ludwig Loewe & Company united its weapons and ammunition production facilities within one company...
(DWM) in Berlin
Berlin
Berlin is the capital city of Germany and is one of the 16 states of Germany. With a population of 3.45 million people, Berlin is Germany's largest city. It is the second most populous city proper and the seventh most populous urban area in the European Union...
and the government arsenal
Arsenal
An arsenal is a place where arms and ammunition are made, maintained and repaired, stored, issued to authorized users, or any combination of those...
at Spandau
Spandau
Spandau is the fifth of the twelve boroughs of Berlin. It is the fourth largest and westernmost borough, situated at the confluence of the Havel and Spree rivers and along the western bank of the Havel, but the least populated.-Overview:...
(so that the gun was often referred to as a Spandau MG08). When the war began in August 1914, approximately 12,000 MG08s were available to battlefield units; production, at numerous factories, was however markedly ramped up during wartime. In 1914 some 200 MG08s were produced each month; by 1916—once the weapon had established itself as the pre-eminent defensive battlefield weapon—the number had increased to 3,000; and a year later to 14,400 per month.

A lightened and thus more portable version of the MG08 was tested as a prototype in 1915 by a team of weapon designers under the direction of a Colonel Friedrich von Merkatz—the MG08/15. The MG08/15 had been designed to be manned by four trained infantrymen spread on the ground around the gun and in the prone position. To accomplish that purpose the MG08/15 featured a short bipod
Bipod
A bipod is a support device that is similar to a tripod or monopod, but with two legs. It provides significant stability along two axes of motion .-Firearms:...
rather than a heavy sled mount tripod, plus a wooden gunstock and a pistol grip
Pistol grip
On a firearm or other tool, the pistol grip is that portion of the mechanism that is held by the hand and orients the hand in a forward, vertical orientation, similar to the position one would take with a conventional pistol such as the M1911....
. At 18 kg, the MG08/15 was lighter and less cumbersome than the standard MG08 since the MG08/15 had been designed to provide increased mobility of infantry automatic fire. It nevertheless remained a bulky water-cooled weapon which was quite demanding on the quality and training of its crews. Accurate fire was difficult to achieve and usually in short bursts only. It was first introduced in battle during the French "Chemin des Dames
Chemin des Dames
In France, the Chemin des Dames is part of the D18 and runs east and west in the département of Aisne, between in the west, the Route Nationale 2, and in the east, the D1044 at Corbeny. It is some thirty kilometres long and runs along a ridge between the valleys of the rivers Aisne and Ailette...
" offensive in April 1917 where it contributed to the very high casualty count among the French assailants. Its deployment in increasingly large numbers with all front line infantry regiments continued in 1917 and during the German offensives of the spring and summer of 1918. The MG08/15 became, by far, the most common German machine gun deployed in World War I (Dolf Goldsmith, 1989) since it reached a full allocation of six guns per company or 72 guns per regiment in 1918. By that time, there were four times as many MG08/15 light machine guns than heavy MG08 machine guns in each infantry regiment. To attain this goal, about 130,000 MG08/15 had to be manufactured during World War I, most of them by the Spandau and Erfurt government arsenals.

An air-cooled and thus water-free and lighter version of the MG08/15, designated as the MG08/18, was battlefield tested in small numbers during the last months of the war. The MG08/18's barrel was heavier but it could not be quick-changed, thus overheating was inevitably a problem. It would take the much later MG34, yet to come, to achieve that indispensable flexibility.

The word 08/15 lives on as an idiom
Idiom
Idiom is an expression, word, or phrase that has a figurative meaning that is comprehended in regard to a common use of that expression that is separate from the literal meaning or definition of the words of which it is made...
in colloquial German
German language
German is a West Germanic language, related to and classified alongside English and Dutch. With an estimated 90 – 98 million native speakers, German is one of the world's major languages and is the most widely-spoken first language in the European Union....
, 08/15 , being used even today as an adjective to denote something totally ordinary and lacking in originality or specialness.


A variant chambered in the same round as the 13 mm Mauser Anti Tank Rifle
13.2 mm Rifle Anti-Tank (Mauser)
The Mauser 13 mm anti-tank rifle was the world's first anti-tank rifle, i.e. the first rifle designed for the sole purpose of destroying armored targets and the only anti-tank rifle to see service in World War 1. Approximately 15,800 were produced...
was introduced in 1918. It was known as tank and aircraft , and had a designation MG18. It was issued in limited numbers as it was late for World War I.

Because of the Sino-German alliance
Sino-German cooperation (1911-1941)
Between 1911 and 1941, cooperation between Germany and China was instrumental in modernizing the industry and the armed forces of the Republic of China prior to the Second Sino-Japanese War. The Republic of China, which succeeded the Qing Dynasty in 1912, was fraught with factional warlordism and...
, the Germans supplied the Chinese with MG 08s. Later in 1935, the Chinese demanded to have machine guns produced by themselves, so they created the Type 24 Heavy machine gun.

The Type 24 heavy machine gun's tripod resembles the tripod of the MG 08. This gun is not able to be mounted on sledge mounts. When aiming at enemy infantry, it usually comes with a muzzle disk. When used as an anti-aircraft gun, it uses a metal pole to make the tripod higher and usually does not come with a muzzle disk. The gun's receiver is similar to the MG 08's gun body. Like the original MG 08, it needs a crew of four. 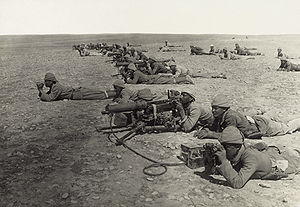 : Captured from German troops during World War 2 (Turkish War of Independence): in 1918-44, up to 5,964 MG08 (ckm wz.08) and 7,775 MG08/15 (lkm wz.08/15): Made under license as the Type 24 heavy machine gun.: Type 24 chambered in the 7.62x54mmR cartridge.: Used Chinese Type 24 during the Korean War
Korean War
The Korean War was a conventional war between South Korea, supported by the United Nations, and North Korea, supported by the People's Republic of China , with military material aid from the Soviet Union...
.: Used Chinese Type 24 during the Vietnam War
Vietnam War
The Vietnam War was a Cold War-era military conflict that occurred in Vietnam, Laos, and Cambodia from 1 November 1955 to the fall of Saigon on 30 April 1975. This war followed the First Indochina War and was fought between North Vietnam, supported by its communist allies, and the government of...
.