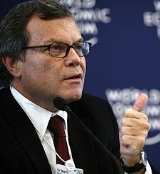 Encyclopedia
Sir Martin Sorrell is an English businessman and the chief executive officer of WPP Group
WPP Group
WPP plc is a global media communications services company with its main management office in London, United Kingdom and its executive office in Dublin, Ireland. It is the world's largest advertising group by revenues, and employs over 150,000 people in 2,400 offices in 107 countries...
. He has served in that role since he started the company.

Born in London to a Jewish family, whose ancestors came from Russia
Russia
Russia or , officially known as both Russia and the Russian Federation , is a country in northern Eurasia. It is a federal semi-presidential republic, comprising 83 federal subjects...
, Poland
Poland
Poland , officially the Republic of Poland , is a country in Central Europe bordered by Germany to the west; the Czech Republic and Slovakia to the south; Ukraine, Belarus and Lithuania to the east; and the Baltic Sea and Kaliningrad Oblast, a Russian exclave, to the north...
and Romania
Romania
Romania is a country located at the crossroads of Central and Southeastern Europe, on the Lower Danube, within and outside the Carpathian arch, bordering on the Black Sea...
. Sorrell was educated at the independent Haberdashers' Aske's Boys' School
Haberdashers' Aske's Boys' School
The Haberdashers' Aske's Boys' School is a British independent school for boys aged 4–19. It is a member of the Headmasters' and Headmistresses' Conference and of the Haileybury Group....
then Christ's College, Cambridge
Christ's College, Cambridge
Christ's College is a constituent college of the University of Cambridge.With a reputation for high academic standards, Christ's College averaged top place in the Tompkins Table from 1980-2000 . In 2011, Christ's was placed sixth.-College history:...
, and has an MBA from Harvard University
Harvard University
Harvard University is a private Ivy League university located in Cambridge, Massachusetts, United States, established in 1636 by the Massachusetts legislature. Harvard is the oldest institution of higher learning in the United States and the first corporation chartered in the country...
.

He joined Glendinning Associates, and James Gulliver and then worked for sports agent Mark McCormack
Mark McCormack
Mark Hume McCormack was an American lawyer, sports agent for professional athletes and a prolific writer...
. He joined Saatchi & Saatchi
Saatchi & Saatchi
Saatchi & Saatchi is a global advertising agency network with 140 offices in 80 countries and over 6,500 staff. It was founded in London in 1970 but now headquartered in New York. The parent company of the agency group was known as Saatchi & Saatchi PLC from 1976 to 1994, was listed on the London...
in 1975, and was group finance director from 1977 until 1984. Often referred to as "the third brother", he designed and carried out Saatchi's then legendary agency acquisitions. Sorrell undertook this by refining the practice of the ‘earn-out’
Earn out
Earn out is a variable part of price paid for a company.Price paid for a company, i.e. for owning the company's equity can be either fixed or variable....
.

In 1985, Sorrell privately invested in Wire Plastic Products
WPP Group
WPP plc is a global media communications services company with its main management office in London, United Kingdom and its executive office in Dublin, Ireland. It is the world's largest advertising group by revenues, and employs over 150,000 people in 2,400 offices in 107 countries...
, a British wire shopping basket manufacturer, and joined it full-time as Chief Executive in 1986. He began to acquire "below-the-line
Below the line (advertising)
Above the line , below the line , and through the Line , in organizational business and marketing communications, are different ways companies try and sell their products....
" advertising-related companies, purchasing 18 in three years, including in 1987 when he stunned the agency world with a $566 million "hostile" takeover of J. Walter Thompson
JWT
JWT is one of the largest advertising agencies in the United States and the fourth-largest in the world. It is one of the key companies of Sir Martin Sorrell's WPP Group and is headquartered in New York. The global agency is led by Worldwide Chairman and Global CEO Bob Jeffrey who took over the...
. Sorrell followed this in 1989 with another dramatic hostile $825 million buy of Ogilvy and Mather. Since 2000, WPP has also acquired two more integrated, global agency networks, Young & Rubicam Brands and Grey.

WPP is regarded as the driving force for the period of consolidation which has been going on within the communications industry for the last ten – fifteen years. His WPP group has amassed the largest media buying group in the world, GroupM. Together with the creative agency networks, JWT, Ogilvy and Mather, Young & Rubicam and Grey, WPP is one of the three major players in the global advertising market.

WPP’s stock price soared and although the company then went through difficult times, during which it was on the verge of collapse, Sorrell’s determination and business acumen brought it around.

WPP has become one of the world's leading communications services and advertising companies valued by the UK stockmarket at £5 billion. With billings of £37 billion and revenues of £7.5 billion, WPP's operating companies provide national, multi-national and global clients with advertising, media investment management, information and consultancy, public relations and public affairs, branding and identity, healthcare communications, direct, digital, promotion and relationship marketing, and specialist communications services. WPP employs 140,000 people in 2,400 offices in 107 countries. He owns a substantial stake in the company through a series of pay awards and his own purchases of shares. Until recently he had never before sold shares in the company; his shares are worth around £70 million.

Sorrell himself is widely respected throughout the advertising industry, with his words being scrutinised and quoted by many within the marketing sector. Many industry observers credit him with the fact that the UK still has an independent, vibrant communications industry. His famed remark that the advertising recession in the early part of this decade was "bath shaped" was one of the most repeated quotes in the 2003 – 2004 period.

On 18 November 2008, WPP technically re-incorporated itself as an offshore entity in Jersey (Jersey is considered as a fiscal paradise by the OECD) in order to reduce an annual tax bill of more than £200million.

In 2003, after 33 years of marriage Sir Martin Sorrell split from his wife Sandra. Lady Sorrell was awarded £23million in cash, a Georgian townhouse, £2 million of bank deposits and two parking slots at Harrods (worth nearly £200,000).

In 2005 Sorrell sold £9m of shares in WPP at the end of a restricted stock holding period. He also agreed to change a contract with the company which had been much criticised by institutional shareholders in WPP as being unfairly written in Sorrell's favour. Under the previous agreement if Sorrell had been terminated, it would have led to a very large payout; the new agreement provides him instead with no termination payment.

In 2005 his pay was £2.42 million including cash and bonuses. Further he exercised £52 million in share options, is entitled to a further £5.8million in stock, and deferred further options on another 2.65 million shares valued at £15 million until 2008. In 2011 Sorrell's pay package increased by 70% to £4.5 million after WPP's pre-tax profits rose 28%. In October 2011 Sorrell went on the BBC to defend large increases in his and other CEO pay packages at a time when real average wages in the Western world
Western world
The Western world, also known as the West and the Occident , is a term referring to the countries of Western Europe , the countries of the Americas, as well all countries of Northern and Central Europe, Australia and New Zealand...
are declining.

Shareholders have criticised aspects of corporate governance at WPP. This came to the fore again in 2006 with the advent of two court cases revolving around alleged corruption in an Italian subsidiary and contract disputes with the US launch of the OK! magazine.

On 27 September 2007, Sorrell was awarded the Harvard Business School
Harvard Business School
Harvard Business School is the graduate business school of Harvard University in Boston, Massachusetts, United States and is widely recognized as one of the top business schools in the world. The school offers the world's largest full-time MBA program, doctoral programs, and many executive...
’s highest honor, the Alumni Achievement Award, by Dean
Dean (education)
In academic administration, a dean is a person with significant authority over a specific academic unit, or over a specific area of concern, or both...
Jay O. Light
Jay O. Light
Jay Owen Light is the former and the ninth dean of the Harvard Business School. He was appointed by Lawrence Summers, on April 24, 2006. On July 1, 2010, he was succeeded by Nitin Nohria....
. The award was also given to: Ayala Corp. chair Jaime Augusto Zobel de Ayala, A. Malachi Mixon of Invacare
Invacare
Invacare Corporation is one of the world's leading manufacturer and distributor of non-acute medical equipments including wheelchairs, mobility scooters, walkers, pressure care and positioning, as well as respiratory products...
, Donna Dubinsky
Donna Dubinsky
Donna Dubinsky is a businesswoman who played an integral role in the development of personal digital assistants serving as CEO of Palm, Inc. and co-founding Handspring with Jeff Hawkins in 1995...
and Hansjorg Wyss
Hansjörg Wyss
Hansjörg Wyss is a Swiss entrepreneur and businessman. As of 2008, Wyss ranks #164 on the Forbes list of billionaires, with a net worth of approximately $6 billion, making him the second richest person in Switzerland.-Life and career:...
of Synthes
Synthes
Synthes Holding AG is a multinational medical device manufacturer based in Solothurn, Switzerland and West Chester, Pennsylvania, United States. It is the world's largest maker of implants to mend bone fractures, and also produces surgical power tools and advanced biomaterials...
.

Sorrell was previously married to Sandra, with whom he has three sons, but the marriage broke down in 2003. In October 2005, Sorrell cashed in £12 millon of shares in WPP to satisfy paying their £30 million divorce
Divorce
Divorce is the final termination of a marital union, canceling the legal duties and responsibilities of marriage and dissolving the bonds of matrimony between the parties...
settlement, where represented by Nicholas Mostyn
Nicholas Mostyn
Sir Nicholas Anthony Joseph Ghislain Mostyn , styled The Hon. Mr Justice Mostyn, is a British High Court of Justice judge in the family division, and a former leading divorce lawyer.-Early life:...
QC she was awarded: a £3.25m Georgian
Georgian architecture
Georgian architecture is the name given in most English-speaking countries to the set of architectural styles current between 1720 and 1840. It is eponymous for the first four British monarchs of the House of Hanover—George I of Great Britain, George II of Great Britain, George III of the United...
townhouse; two Harrods
Harrods
Harrods is an upmarket department store located in Brompton Road in Brompton, in the Royal Borough of Kensington and Chelsea, London. The Harrods brand also applies to other enterprises undertaken by the Harrods group of companies including Harrods Bank, Harrods Estates, Harrods Aviation and Air...
underground car parking spaces worth £200,000; £2m in bank deposits; £23.4m in cash; plus stocks and shares.

Despite the divorce settlement, Sorrell still had 13 million shares an estimated £80m valued stake in WPP at the time of the divorce, which represented around 1% of the company, plus his 2005 pay settlement award.