Encyclopedia
Markree Castle, in Collooney
Collooney
-Transport:Collooney is located just off the N4 and N17 roads, having been bypassed twice, by the N4 in 1998, and the N17 in 1992, and is the meeting point of both roads. The town was a significant railway centre, with no less than three railway stations...
, County Sligo, Ireland
Ireland
Ireland is an island to the northwest of continental Europe. It is the third-largest island in Europe and the twentieth-largest island on Earth...
is the ancestral seat of the Cooper family, partially moated by the River Unshin. Today it is a small family-run hotel. 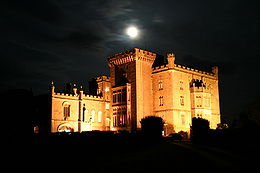 In 1663 Cornet
Cornet (military rank)
Cornet was originally the third and lowest grade of commissioned officer in a British cavalry troop, after captain and lieutenant. A cornet is a new and junior officer.- Traditional duties :The cornet carried the troop standard, also known as a "cornet"....
Edward Cooper, who served under Cromwell
Oliver Cromwell
Oliver Cromwell was an English military and political leader who overthrew the English monarchy and temporarily turned England into a republican Commonwealth, and served as Lord Protector of England, Scotland, and Ireland....
when his army defeated the O'Brien Clan, was allotted the original 14th century Markree Castle and the surrounding lands. Until then, Markree had been a fortified outpost of the Irish McDonagh Clan, guarding the ford across the river Unsin.

O'Brien himself lost his life in this battle, and Edward married his widow Marie Rua (Red Mary). With her two sons they went to live at Limerick Castle. One son was left the castle in Limerick and the other inherited Markree.
Charles Cooper, the current owner, is a direct descendant of this son

Times remained turbulent and during an attempt by the English King James
James II of England
James II & VII was King of England and King of Ireland as James II and King of Scotland as James VII, from 6 February 1685. He was the last Catholic monarch to reign over the Kingdoms of England, Scotland, and Ireland...
to regain the throne, the Catholic army occupied Markree Castle and the Coopers had to flee. After the Battle of the Boyne
Battle of the Boyne
The Battle of the Boyne was fought in 1690 between two rival claimants of the English, Scottish and Irish thronesthe Catholic King James and the Protestant King William across the River Boyne near Drogheda on the east coast of Ireland...
in 1690, they returned and have been resident ever since except for a brief period during the Civil War in the 1920s when Markree was again occupied, this time by the Irish Free State
Irish Free State
The Irish Free State was the state established as a Dominion on 6 December 1922 under the Anglo-Irish Treaty, signed by the British government and Irish representatives exactly twelve months beforehand...
army. 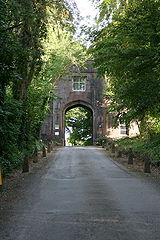 "The Observatory of Mr Cooper of Markree Castle - undoubtedly the most richly furnished private observatory known - is worked with great activity by Mr Cooper himself and by his very able assistant, Mr Andrew Graham." (Royal Astronomical Society, 1851)

The observatory remained active until the death of Edward Henry Cooper MP
Sligo County (UK Parliament constituency)
Sligo County is a former county constituency in Ireland, represented in the House of Commons of the Parliament of the United Kingdom. It returned two Members of Parliament , elected by the bloc vote system of election.-Boundaries:...
in 1902.

The soldier and politician Bryan Cooper
Bryan Cooper (politician)
Bryan Ricco Cooper was an Irish politician, writer and landowner from Markree Castle, County Sligo. He was prominent in Dáil Éireann in the early years of the Irish Free State, having previously served as MP to Westminster for South Dublin County , a seat he subsequently represented in the Dáil...
inherited the castle on the death of his father in 1902 and resided there with his family (except during World War I and when carrying out political duties) from 1903 until his death in 1930.

After the Second World War the castle fell on hard times and stood empty and derelict for many years. In 1988 it appeared on the front cover of The Vanishing Country Houses of Ireland, a testament to the sad state of decay of many of Ireland’s great houses at the time, until in 1989, Charles Cooper transformed his ancestral castle into a hotel.

Today, Markree Castle operates as a hotel run by Charles and Mary Cooper, the 10th generation of the family to live there.

The 300 acres (1.2 km²) estate holds an array of wild life from red squirrels, to otters, to kingfishers.


The entrance contains a monumental staircase, which leads to a wonderful hall, from where a second staircase in carved wood leads to the 30 guest rooms. On the landing, a huge stained glass window traces the Cooper family tree from Victorian times back to the time of King John
John of England
John , also known as John Lackland , was King of England from 6 April 1199 until his death...
. The dining room is decorated in Louis Philippe
Louis-Philippe of France
Louis Philippe I was King of the French from 1830 to 1848 in what was known as the July Monarchy. His father was a duke who supported the French Revolution but was nevertheless guillotined. Louis Philippe fled France as a young man and spent 21 years in exile, including considerable time in the...
-style plasterwork.