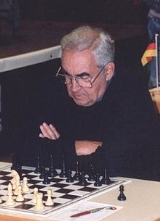 Encyclopedia
Mark Evgenievich Taimanov ' onMouseout='HidePop("95255")' href="/topics/Kharkiv">Kharkiv
Kharkiv
Kharkiv or Kharkov is the second-largest city in Ukraine.The city was founded in 1654 and was a major centre of Ukrainian culture in the Russian Empire. Kharkiv became the first city in Ukraine where the Ukrainian Soviet Socialist Republic was proclaimed in December 1917 and Soviet government was...
) is a leading Soviet and Russia
Russia
Russia or , officially known as both Russia and the Russian Federation , is a country in northern Eurasia. It is a federal semi-presidential republic, comprising 83 federal subjects...
n chess
Chess
Chess is a two-player board game played on a chessboard, a square-checkered board with 64 squares arranged in an eight-by-eight grid. It is one of the world's most popular games, played by millions of people worldwide at home, in clubs, online, by correspondence, and in tournaments.Each player...
player and concert
Concert
A concert is a live performance before an audience. The performance may be by a single musician, sometimes then called a recital, or by a musical ensemble, such as an orchestra, a choir, or a musical band...
pianist
Pianist
A pianist is a musician who plays the piano. A professional pianist can perform solo pieces, play with an ensemble or orchestra, or accompany one or more singers, solo instrumentalists, or other performers.-Choice of genres:...
.

After his loss to Fischer, the Soviet government was embarrassed, and, as Taimanov later put it in a 2002 interview, found it "unthinkable" that he could have lost the match so badly to an American without a "political explanation". Soviet officials took away Taimanov's salary and no longer allowed him to travel overseas. The official reason given for punishing Taimanov was that he had brought a book by Aleksandr Solzhenitsyn
Aleksandr Solzhenitsyn
Aleksandr Isayevich Solzhenitsyn was aRussian and Soviet novelist, dramatist, and historian. Through his often-suppressed writings, he helped to raise global awareness of the Gulag, the Soviet Union's forced labor camp system – particularly in The Gulag Archipelago and One Day in the Life of...
into the country, but that explanation was secondary in nature. The officials later "forgave" Taimanov, and lifted the sanctions against him. Fischer's 6-0 win against Bent Larsen
Bent Larsen
Jørgen Bent Larsen was a Danish chess Grandmaster and author. Larsen was known for his imaginative and unorthodox style of play and he was the first western player to pose a serious challenge to the Soviet Union's dominance of chess...
later in 1971 may have helped change their minds.

With his wife, Lyubov Bruk, he formed a piano duo, some of whose recordings were included in the Philips
Philips
Koninklijke Philips Electronics N.V. , more commonly known as Philips, is a multinational Dutch electronics company....
and Steinway
Steinway & Sons
Steinway & Sons, also known as Steinway , is an American and German manufacturer of handmade pianos, founded 1853 in Manhattan in New York City by German immigrant Heinrich Engelhard Steinweg...
series Great Pianists of the 20th Century.

Taimanov was born in Kharkiv
Kharkiv
Kharkiv or Kharkov is the second-largest city in Ukraine.The city was founded in 1654 and was a major centre of Ukrainian culture in the Russian Empire. Kharkiv became the first city in Ukraine where the Ukrainian Soviet Socialist Republic was proclaimed in December 1917 and Soviet government was...
, Ukraine
Ukraine
Ukraine is a country in Eastern Europe. It has an area of 603,628 km², making it the second largest contiguous country on the European continent, after Russia...
, but his family moved to Saint Petersburg
Saint Petersburg
Saint Petersburg is a city and a federal subject of Russia located on the Neva River at the head of the Gulf of Finland on the Baltic Sea...
when he was 6 months old.
He remarried late in life and became the father of twins at the age of 78. 57 years separate his oldest child and his twins.