Encyclopedia
The Maritime Museum of the Atlantic is a Canadian
Canada
Canada is a North American country consisting of ten provinces and three territories. Located in the northern part of the continent, it extends from the Atlantic Ocean in the east to the Pacific Ocean in the west, and northward into the Arctic Ocean...
maritime museum
Maritime museum
A maritime museum is a museum specializing in the display of objects relating to ships and travel on large bodies of water...
located in downtown
Downtown Halifax
Downtown Halifax is the city centre of the Halifax Regional Municipality, Nova Scotia. Located on the eastern-central portion of the Halifax Peninsula, on Halifax Harbour, it serves as the business, entertainment, and tourism hub of the region.- Municipal:...
Halifax, Nova Scotia
Nova Scotia
Nova Scotia is one of Canada's three Maritime provinces and is the most populous province in Atlantic Canada. The name of the province is Latin for "New Scotland," but "Nova Scotia" is the recognized, English-language name of the province. The provincial capital is Halifax. Nova Scotia is the...
.

The Maritime Museum of the Atlantic is a member institution of the Nova Scotia Museum
Nova Scotia Museum
Nova Scotia Museum is the corporate name for the most decentralized museum in Canada - 27 museums across Nova Scotia, including over 200 historic buildings, living history sites, vessels, specialized museums and close to a million artifacts and specimens...
and is the oldest and largest maritime museum in Canada with a collection of over 30,000 artifacts including 70 small craft and one ship:
the CSS Acadia
CSS Acadia
CSS Acadia is a former hydrographic surveying and oceanographic research ship of the Hydrographic Survey of Canada and its successor the Canadian Hydrographic Service....
, a 180 foot steam-powered hydrographic survey ship launched in 1913.

HMCS Sackville
HMCS Sackville (K181)
HMCS Sackville was a Flower-class corvette that served in the Royal Canadian Navy and later served as a civilian research vessel. She is now a museum ship located in Halifax, Nova Scotia and the last surviving Flower-class corvette.-Wartime service:...
, a World War II
World War II
World War II, or the Second World War , was a global conflict lasting from 1939 to 1945, involving most of the world's nations—including all of the great powers—eventually forming two opposing military alliances: the Allies and the Axis...
Flower-class
Flower class corvette
The Flower-class corvette was a class of 267 corvettes used during World War II, specifically with the Allied navies as anti-submarine convoy escorts during the Battle of the Atlantic...
corvette
Corvette
A corvette is a small, maneuverable, lightly armed warship, originally smaller than a frigate and larger than a coastal patrol craft or fast attack craft , although many recent designs resemble frigates in size and role...
is docked adjacent to the museum when she is open for public viewing in the summer months, but is not owned or administered by the museum.

The Museum was founded in 1948. It was first known as the Maritime Museum of Canada and located at HMC Dockyard
CFB Halifax
Canadian Forces Base Halifax is Canada's east coast navy base and home port to the Atlantic fleet, known as Maritime Forces Atlantic....
, the naval base on Halifax Harbour. Several naval officers served as volunteer chairs of the Museum until 1959 when Niels Jannasch
Niels Jannasch
Niels Windekilde Jannasch, OC was a mariner, marine historian and the founding director of the Maritime Museum of the Atlantic.He was born on July 5, 1924 in Holzminden, Germany. Jannasch served with coastal forces in the German navy in World War Two. After the war he sailed in merchant ships,...
was hired as the Museum's founding director, serving until 1985. The museum moved through several locations over the next three decades before its current building was constructed in 1981 as part of a waterfront redevelopment program. The museum received the CSS Acadia in 1982. Today the Museum is part of the Nova Scotia Museum system.

Its location on the Halifax waterfront at the southern edge of the Historic Properties provides the museum with several docks and boatsheds, as well as a strategic view of the harbour looking seaward towards the Harbourmaster
Harbourmaster
A harbourmaster is an official responsible for enforcing the regulations of a particular harbour or port, in order to ensure the safety of navigation, the security of the harbour and the correct operation of the port facilities.-Responsibilities:Harbourmasters are normally responsible for issuing...
office. Among its facilities is the restored 1880s Roberston Store ship chandlery, as well as modern exhibit galleries in the Devonian Wing (the modern museum building). Ongoing restoration of Whim, a 1937 C Class sloop can be found in one of the boatsheds on the wharf behind the museum. In addition to this current restoration project, the boatsheds house some of the museum's small craft collection. During the winter months three boats in the working small craft collection are on display in the boatsheds, and can be found moored next to CSS Acadia during the summer months. 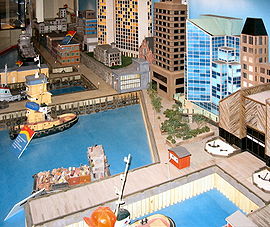 Exhibits include galleries about the Halifax Explosion
Halifax Explosion
The Halifax Explosion occurred on Thursday, December 6, 1917, when the city of Halifax, Nova Scotia, Canada, was devastated by the huge detonation of the SS Mont-Blanc, a French cargo ship, fully loaded with wartime explosives, which accidentally collided with the Norwegian SS Imo in "The Narrows"...
, the Age of Sail, and Shipwrecks, including the sinking of RMS Titanic. The museum has the world's foremost collection of wooden artifacts from Titanic, including one of the few surviving deck chairs. The Titanic exhibit also includes a child's pair of shoes which helped identify Titanic's "unknown child" as Sidney Leslie Goodwin
Sidney Leslie Goodwin
Sidney Leslie Goodwin was a 19-month-old English boy who died during the sinking of the RMS Titanic. His unidentified body was recovered after the sinking by the Mackay-Bennett, and for decades referred to as the unknown child; the body was identified as that of Goodwin in 2007...
. An Age of Steam gallery includes a special display on Samuel Cunard
Samuel Cunard
Sir Samuel Cunard, 1st Baronet was a British shipping magnate, born at Halifax, Nova Scotia, who founded the Cunard Line...
, the Nova Scotian who created the Cunard Line
Cunard Line
Cunard Line is a British-American owned shipping company based at Carnival House in Southampton, England and operated by Carnival UK. It has been a leading operator of passenger ships on the North Atlantic for over a century...
. 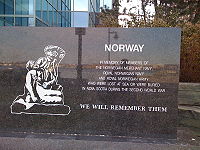 The museum also has a changing exhibits gallery. A 2009 exhibit Ship of Fate: The Tragic Voyage of the St. Louis was the first Canadian exhibit to explore the 1939 voyage of the Jewish refugee ship MS St. Louis. The Museum became the first museum in North America to present an exhibit about the lives of gay seafarers in 2011 when it presented Hello Sailor: Gay Life on the Ocean Waves, adapted from an exhibit developed at the Merseyside Maritime Museum
Merseyside Maritime Museum
The Merseyside Maritime Museum is a museum based in the city of Liverpool, Merseyside, England. It is part of National Museums Liverpool and an Anchor Point of ERIH, The European Route of Industrial Heritage...
in Liverpool
Liverpool
Liverpool is a city and metropolitan borough of Merseyside, England, along the eastern side of the Mersey Estuary. It was founded as a borough in 1207 and was granted city status in 1880...
, England
England
England is a country that is part of the United Kingdom. It shares land borders with Scotland to the north and Wales to the west; the Irish Sea is to the north west, the Celtic Sea to the south west, with the North Sea to the east and the English Channel to the south separating it from continental...
.

The museum's striking location on the Halifax waterfront has made the Museum the site of several significant public events. In addition to being a stop on most Canadian federal election campaigns, the museum hosted meetings from the 1995 G7 Summit
21st G7 summit
The 21st G7 summit was held from June 15 to June 17, 1995 in Halifax, Nova Scotia. The venue for this summit meeting was Summit Place in Halifax...
, as well a September 11 commemorative event in 2006 attended by Canada's Minister of Foreign Affairs
Minister of Foreign Affairs (Canada)
The Minister of Foreign Affairs is the Minister of the Crown in the Canadian Cabinet who is responsible for overseeing the federal government's international relations section of Foreign Affairs and International Trade Canada....
, Peter MacKay
Peter MacKay
Peter Gordon MacKay, PC, QC, MP is a lawyer and politician from Nova Scotia, Canada. He is the Member of Parliament for Central Nova and currently serves as Minister of National Defence in the Cabinet of Canada....
and United States Secretary of State
United States Secretary of State
The United States Secretary of State is the head of the United States Department of State, concerned with foreign affairs. The Secretary is a member of the Cabinet and the highest-ranking cabinet secretary both in line of succession and order of precedence...
, Condoleezza Rice
Condoleezza Rice
Condoleezza Rice is an American political scientist and diplomat. She served as the 66th United States Secretary of State, and was the second person to hold that office in the administration of President George W. Bush...
. The Museum hosts an annual commemoration of the Battle of the Atlantic on the first Sunday of every May and Canadian Merchant Navy
Canadian Merchant Navy
Canada, like several other Commonwealth nations, created its own Merchant Navy in a large-scale effort during World War II. Within hours of Canada's declaration of war on September 10, 1939, the Canadian government passed laws to create the Canadian Merchant Navy setting out rules and controls to...
day every September 3.