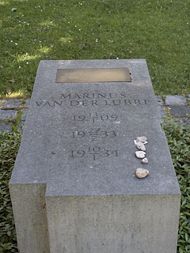 Marinus van der Lubbe (13 January 1909 – 10 January 1934) was a Dutch
Netherlands
The Netherlands is a constituent country of the Kingdom of the Netherlands, located mainly in North-West Europe and with several islands in the Caribbean. Mainland Netherlands borders the North Sea to the north and west, Belgium to the south, and Germany to the east, and shares maritime borders...
council communist
Council communism
Council communism is a current of libertarian Marxism that emerged out of the November Revolution in the 1920s, characterized by its opposition to state capitalism/state socialism as well as its advocacy of workers' councils as the basis for workers' democracy.Originally affiliated with the...
convicted of, and controversially executed for, setting fire to the German
Germany
Germany , officially the Federal Republic of Germany , is a federal parliamentary republic in Europe. The country consists of 16 states while the capital and largest city is Berlin. Germany covers an area of 357,021 km2 and has a largely temperate seasonal climate...
Reichstag building on February 27, 1933, an event known as the Reichstag fire
Reichstag fire
The Reichstag fire was an arson attack on the Reichstag building in Berlin on 27 February 1933. The event is seen as pivotal in the establishment of Nazi Germany....
. .

Marinus van der Lubbe was born in Leiden in the province of Zuid-Holland. He was born with learning difficulties, and apparently had a fascination with fire
Pyromania
Pyromania in more extreme circumstances can be an impulse control disorder to deliberately start fires to relieve tension or for gratification or relief. The term pyromania comes from the Greek word πῦρ . Pyromania and pyromaniacs are distinct from arson, the pursuit of personal, monetary or...
. His parents were divorced and, after his mother died when he was 12, he went to live with his half-sister's family. In his youth Van der Lubbe worked as a bricklayer. He was nicknamed Dempsey after the boxer Jack Dempsey
Jack Dempsey
William Harrison "Jack" Dempsey was an American boxer who held the world heavyweight title from 1919 to 1926. Dempsey's aggressive style and exceptional punching power made him one of the most popular boxers in history. Many of his fights set financial and attendance records, including the first...
, because of his great strength. At his work, van der Lubbe came in contact with the labor movement; in 1925, he joined the Dutch Communist Party (CPH)
Communist Party of the Netherlands
The Communist Party of the Netherlands was a Dutch communist political party. The CPN is one of the predecessors of the GreenLeft.- Foundation :...
, and its youth section the Communist Youth Bund (CJB)
General Dutch Youth League
Algemeen Nederlands Jeugd Verbond, a political youth movement in the Netherlands. ANJV was founded on June 15, 1945 in Concert building, Amsterdam...
.

In 1926, he was injured at work, getting lime in his eyes, which left him in the hospital for a few months and almost blinded him. The injury forced him to quit his work, so he was unemployed with a pension of only 7.44 guilders a week. Not being able to live off this, he was forced to take occasional jobs. After a few conflicts with his sister, van der Lubbe moved to Leiden in 1927. There he learned to speak some German
German language
German is a West Germanic language, related to and classified alongside English and Dutch. With an estimated 90 – 98 million native speakers, German is one of the world's major languages and is the most widely-spoken first language in the European Union....
and founded the Lenin house, where he organized political meetings. While working for the Tielmann factory a strike
Strike action
Strike action, also called labour strike, on strike, greve , or simply strike, is a work stoppage caused by the mass refusal of employees to work. A strike usually takes place in response to employee grievances. Strikes became important during the industrial revolution, when mass labour became...
broke out. Van der Lubbe claimed to the management to be one of the ringleaders and offered to accept any punishment as long as no one else was victimised, even though he was clearly too inexperienced to have been seriously involved. During the trial, he tried to claim sole responsibility and was purportedly hostile to the idea of getting off free.

Afterwards, van der Lubbe planned to emigrate to the Soviet Union
Soviet Union
The Soviet Union , officially the Union of Soviet Socialist Republics , was a constitutionally socialist state that existed in Eurasia between 1922 and 1991....
, but he lacked the funds to do so. He was politically active among the unemployed workers' movement until 1931, when he fell into disagreement with the CPH and instead approached the Internationalist Communist Group (IKG). In 1933, van der Lubbe fled to Germany to take action in the local communist underground. He had a criminal record for arson
Arson
Arson is the crime of intentionally or maliciously setting fire to structures or wildland areas. It may be distinguished from other causes such as spontaneous combustion and natural wildfires...
. 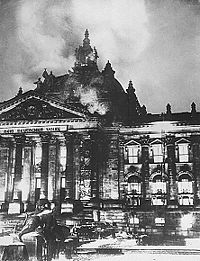 According to the Berlin police, van der Lubbe claimed to have set the Reichstag building on fire
Reichstag fire
The Reichstag fire was an arson attack on the Reichstag building in Berlin on 27 February 1933. The event is seen as pivotal in the establishment of Nazi Germany....
as a cry to rally the German workers against fascist rule. Under torture, he confessed again and was brought to trial along with the leaders of the opposition Communist Party. At his trial van der Lubbe was convicted and sentenced to death for the Reichstag fire. The other four defendants (Ernst Torgler
Ernst Torgler
Ernst Torgler was a controversial member of the Communist Party of Germany prior to World War II and a defendant in the Reichstag Fire Trial.-Biography:...
, Georgi Dimitrov
Georgi Dimitrov
Georgi Dimitrov Mikhaylov , also known as Georgi Mikhaylovich Dimitrov , was a Bulgarian Communist politician...
, Blagoi Popov
Blagoi Popov
Blagoy Popov , one of the co-defendants along with Georgi Dimitrov and Vasil Tanev in the Leipzig trial. After the trial, he moved to Moscow in February 1934. Popov studied there until 1937 when he was caught up in the Stalinist purges. He would spent the next seventeen years in a Soviet Gulag...
, and Vassili Tanev) at the trial were acquitted. He was guillotined in a Leipzig prison yard on 10 January 1934, three days before his 25th birthday. He was buried in an unmarked grave on the Südfriedhof (South Cemetery) in Leipzig.


Cause of the Reichstag fire 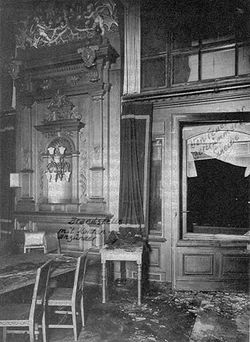 Historians disagree as to whether Van der Lubbe was the sole culprit of the fire, despite Nuremberg
Nuremberg Trials
The Nuremberg Trials were a series of military tribunals, held by the victorious Allied forces of World War II, most notable for the prosecution of prominent members of the political, military, and economic leadership of the defeated Nazi Germany....
testimony and other circumstantial evidence suggesting that he did not act alone. Some historians (especially Bahar and Kugel) believe that he was an unwitting pawn of the Gestapo
Gestapo
The Gestapo was the official secret police of Nazi Germany. Beginning on 20 April 1934, it was under the administration of the SS leader Heinrich Himmler in his position as Chief of German Police...
, who manipulated him to create the event, though controversy about this exists too. Much difficulty is created by the fact that substantial amounts of evidence for all theories was later found to be manufactured by the Soviet Union or secret police after the event.

The forensic evidence from the scene, a set of photographs taken by the Berlin
Berlin
Berlin is the capital city of Germany and is one of the 16 states of Germany. With a population of 3.45 million people, Berlin is Germany's largest city. It is the second most populous city proper and the seventh most populous urban area in the European Union...
police department, shows many small fires started by van der Lubbe after he entered the building, apparently using fire-lighters. All of the examples of fires he set, such as one near the window on the ground floor where it is alleged he entered, self-extinguished. The main fire which was set in the debating chamber did succeed and destroyed the central parts of the building.