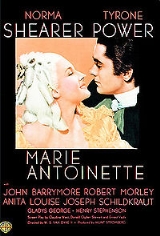 Encyclopedia
Marie Antoinette is a 1938 film produced by Metro-Goldwyn-Mayer
Metro-Goldwyn-Mayer
Metro-Goldwyn-Mayer Inc. is an American media company, involved primarily in the production and distribution of films and television programs. MGM was founded in 1924 when the entertainment entrepreneur Marcus Loew gained control of Metro Pictures, Goldwyn Pictures Corporation and Louis B. Mayer...
. It was directed by W. S. Van Dyke
W. S. Van Dyke
Woodbridge Strong "Woody" Van Dyke, Jr. was an American motion picture director.-Early life and career:...
and starred Norma Shearer
Norma Shearer
Edith Norma Shearer was a Canadian-American actress. Shearer was one of the most popular actresses in North America from the mid-1920s through the 1930s...
as Marie Antoinette
Marie Antoinette
Marie Antoinette ; 2 November 1755 – 16 October 1793) was an Archduchess of Austria and the Queen of France and of Navarre. She was the fifteenth and penultimate child of Holy Roman Empress Maria Theresa and Holy Roman Emperor Francis I....
. Based upon the 1933 biography of the ill-fated Queen of France by the Austrian writer Stefan Zweig
Stefan Zweig
Stefan Zweig was an Austrian novelist, playwright, journalist and biographer. At the height of his literary career, in the 1920s and 1930s, he was one of the most famous writers in the world.- Biography :...
, it had its Los Angeles
Los Ángeles
Los Ángeles is the capital of the province of Biobío, in the commune of the same name, in Region VIII , in the center-south of Chile. It is located between the Laja and Biobío rivers. The population is 123,445 inhabitants...
premiere at the legendary Carthay Circle Theatre
Carthay Circle Theatre
The Carthay Circle Theatre was one of the most famous movie palaces of Hollywood's Golden Age. It opened at 6316 San Vicente Boulevard in 1926 and was considered developer J...
, where the landscaping
Landscaping
Landscaping refers to any activity that modifies the visible features of an area of land, including:# living elements, such as flora or fauna; or what is commonly referred to as gardening, the art and craft of growing plants with a goal of creating a beautiful environment within the landscape.#...
was specially decorated for the event.

The film was the last project of Irving Thalberg
Irving Thalberg
Irving Grant Thalberg was an American film producer during the early years of motion pictures. He was called "The Boy Wonder" for his youth and his extraordinary ability to select the right scripts, choose the right actors, gather the best production staff and make very profitable films.-Life and...
who died in 1936 while it was in the planning stage. His widow Norma Shearer remained committed to the project even while her enthusiasm for her film career in general was waning following his death.

With a budget close to two million dollars, it was one of the most expensive films of the 1930s, but also one of the biggest successes. Apart from the opulent Hollywood sets, it featured scenes filmed on location at the Palace of Versailles
Palace of Versailles
The Palace of Versailles , or simply Versailles, is a royal château in Versailles in the Île-de-France region of France. In French it is the Château de Versailles....
, near Paris
Paris
Paris is the capital and largest city in France, situated on the river Seine, in northern France, at the heart of the Île-de-France region...
; this was reported to have been the first time a film crew was allowed to film in the grounds of the palace.

In Vienna
Vienna
Vienna is the capital and largest city of the Republic of Austria and one of the nine states of Austria. Vienna is Austria's primary city, with a population of about 1.723 million , and is by far the largest city in Austria, as well as its cultural, economic, and political centre...
, 15-year-old Marie-Antoinette was informed by her mother that she is to marry the future king of France. The young princess has to learn to navigate the treacherous environment of the court at Versailles
Palace of Versailles
The Palace of Versailles , or simply Versailles, is a royal château in Versailles in the Île-de-France region of France. In French it is the Château de Versailles....
. As queen, she is transformed into a charitable but somewhat out-of-touch humanitarian. The final part of the movie follows Zweig's theory that Marie Antoinette "achieved greatness" in the final years of her life, with an emotional scene showing the final supper of the royal family before King Louis's execution, the separation of the queen from her young son and the savage murder of her closest friend. The final scene shows Marie Antoinette going to the guillotine, where the audience hears the voice of the sweet-natured young princess who was so excited to be going to France. Shearer refused any complimentary make-up for this scene, and chose to look as haggard and exhausted as the real queen in her final moments.

Norma Shearer was the wife of MGM
Metro-Goldwyn-Mayer
Metro-Goldwyn-Mayer Inc. is an American media company, involved primarily in the production and distribution of films and television programs. MGM was founded in 1924 when the entertainment entrepreneur Marcus Loew gained control of Metro Pictures, Goldwyn Pictures Corporation and Louis B. Mayer...
studio head Irving Thalberg when this project was greenlighted sometime before his death in 1936. This was reportedly Shearer's favorite role.

Originally to be directed by Sidney Franklin
Sidney Franklin (director)
Sidney Franklin was an American film director and producer. His brother Chester Franklin also became a director during the silent film era best known for helming the early Technicolor film Toll of the Sea....
, the job was given to W.S. Van Dyke. Irving Thalberg originally planned for Charles Laughton
Charles Laughton
Charles Laughton was an English-American stage and film actor, screenwriter, producer and director.-Early life and career:...
to play the role of Louis XVI, but Laughton, after lengthy deliberations, finally declined.

The movie had thousands of costumes and lavish set designs. Gilbert Adrian visited France and Austria in 1937 researching the period. He stated that the 18th century was the most opulent in history and the costumes would reflect this. He studied the paintings of Marie Antoinette, even using a microscope on them so that the embroidery and fabric could be identical. Fabrics were specially woven and embroidered with stitches sometimes too fine to be seen with the naked eye. The attention to detail was extreme, from the framework to hair. Some gowns became extremely heavy due to the amount of embroidery, flounces and precious stones used. Some gowns still survive, such as the rocket dress, now privately owned, which features star bursts done in sequins. Ms. Shearer's gowns alone had the combined weight of over 1,768 pounds, the heaviest being the wedding dress. Originally slated to be shot in color, many of the gowns were specially dyed. The fur trim on one of Ms. Shearer's capes was therefore sent out to be dyed the exact shade of her eyes..Some of the costumes used in the film were auctioned from the Debbie Reynolds
Debbie Reynolds
Debbie Reynolds is an American actress, singer, and dancer.She was initially signed at age 16 by Warner Bros., but her career got off to a slow start. When her contract was not renewed, Metro-Goldwyn-Mayer gave her a small, but significant part in the film Three Little Words , then signed her to...
collection on June 18, 2011 at profiles in history auctioneers.

The ballroom at Versailles
Versailles
Versailles , a city renowned for its château, the Palace of Versailles, was the de facto capital of the kingdom of France for over a century, from 1682 to 1789. It is now a wealthy suburb of Paris and remains an important administrative and judicial centre...
was built to be twice as large as the original. The budget was a then-enormous 2.9 million dollars, and plans to render it in color were scrapped because of concerns it would cost even more to add Technicolor
Technicolor
Technicolor is a color motion picture process invented in 1916 and improved over several decades.It was the second major process, after Britain's Kinemacolor, and the most widely used color process in Hollywood from 1922 to 1952...
. One set of Ms. Shearer's dress and wigs was later worn by Jean Hagen
Jean Hagen
-Early life:Hagen was born as Jean Shirley Verhagen in Chicago, Illinois, to Christian Verhagen , a Dutch immigrant, and his Chicago-born wife, Marie. The family moved to Elkhart, Indiana when she was 12 and she subsequently graduated from Elkhart High School...
during Singin' in the Rain
Singin' in the Rain
Singin' in the Rain is a 1952 American comedy musical film starring Gene Kelly, Donald O'Connor and Debbie Reynolds and directed by Gene Kelly and Stanley Donen, with Kelly also providing the choreography...
, in the scene when she complains about how heavy they were.

Sofia Coppola
Sofia Coppola
Sofia Carmina Coppola is an American screenwriter, film director, actress, and producer.In 2003 she received the Academy Award for Best Original Screenplay for Lost in Translation, and became the third woman to be nominated for an Academy Award for Directing...
released her 2006 film
Marie Antoinette (2006 film)
Marie Antoinette is a 2006 biographical film, written and directed by Sofia Coppola. It is very loosely based on the life of the Queen consort in the years leading up to the French Revolution. It won an Academy Award for Best Costume Design...
version of the life of the queen at Versailles, causing Warner Brothers to release its 1938 vault version of Marie Antoinette on DVD. Extras are sparse, with only two vintage shorts included on the disc. "Hollywood Goes to Town" provides a glimpse of the elaborate premiere for the movie, while a trailer is also included.