Hagen was born as Jean Shirley Verhagen in Chicago, Illinois, to Christian Verhagen (born August 10, 1890 — died April 1983), a Dutch immigrant, and his Chicago-born wife, Marie. The family moved to Elkhart, Indiana
Elkhart, Indiana
Elkhart is a city in Elkhart County, Indiana, United States. The city is located east of South Bend, northwest of Fort Wayne, east of Chicago, and north of Indianapolis...
when she was 12 and she subsequently graduated from Elkhart High School. She studied drama and worked as a theater usherette before making her Broadway theatre
Broadway theatre
Broadway theatre, commonly called simply Broadway, refers to theatrical performances presented in one of the 40 professional theatres with 500 or more seats located in the Theatre District centered along Broadway, and in Lincoln Center, in Manhattan in New York City...
debut in Another Part of the Forest
Another Part of the Forest
Another Part of the Forest is a 1946 play by Lillian Hellman, a prequel to her 1939 drama The Little Foxes.-Plot synopsis:Set in the fictional town of Bowden, Alabama in June 1880, the plot focuses on the wealthy, ruthless, and innately evil Hubbard family and their rise to prominence...
in 1946. 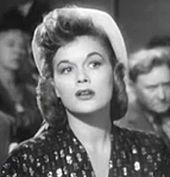 Her film debut was as a femme fatale
Femme fatale
A femme fatale is a mysterious and seductive woman whose charms ensnare her lovers in bonds of irresistible desire, often leading them into compromising, dangerous, and deadly situations. She is an archetype of literature and art...
in Adam's Rib
Adam's Rib
Adam's Rib is a 1949 American film written by Ruth Gordon and Garson Kanin and directed by George Cukor. It stars Spencer Tracy and Katharine Hepburn as married lawyers who come to oppose each other in court. Judy Holliday co-stars in her first substantial film role...
in 1949. The Asphalt Jungle
The Asphalt Jungle
The Asphalt Jungle is a 1950 film noir directed by John Huston. The caper film is based on the novel of the same name by W. R. Burnett and stars an ensemble cast including Sterling Hayden, Jean Hagen, Sam Jaffe, Louis Calhern, James Whitmore, and, in a minor but key role, Marilyn Monroe, an unknown...
(1950) provided Hagen with her first starring role beside Sterling Hayden
Sterling Hayden
Sterling Hayden was an American actor and author. For most of his career as a leading man, he specialized in westerns and film noir, such as Johnny Guitar, The Asphalt Jungle and The Killing. Later on he became noted as a character actor for such roles as Gen. Jack D. Ripper in Dr...
, and excellent reviews. She appeared in the film noir Side Street (1950) playing a gangster's sincere, but none-too-bright gun moll. She is arguably best remembered for her comic performance in Singin' in the Rain
Singin' in the Rain
Singin' in the Rain is a 1952 American comedy musical film starring Gene Kelly, Donald O'Connor and Debbie Reynolds and directed by Gene Kelly and Stanley Donen, with Kelly also providing the choreography...
as the vain and talentless silent movie
Silent Movie
Silent Movie is a 1976 satirical comedy film co-written, directed by, and starring Mel Brooks, and released by 20th Century Fox on June 17, 1976...
star Lina Lamont; Hagen received an Academy Award nomination for Best Supporting Actress.

By 1953, she had joined the cast of the television sitcom Make Room for Daddy
The Danny Thomas Show
The Danny Thomas Show is an American sitcom which ran from 1953-1957 on ABC and from 1957-1964 on CBS...
. As the first wife of Danny Thomas
Danny Thomas
Danny Thomas was an American nightclub comedian and television and film actor, best known for starring in the television sitcom Make Room for Daddy . He was also the founder of St. Jude Children's Research Hospital...
, Hagen received three Emmy Award
Emmy Award
An Emmy Award, often referred to simply as the Emmy, is a television production award, similar in nature to the Peabody Awards but more focused on entertainment, and is considered the television equivalent to the Academy Awards and the Grammy Awards .A majority of Emmys are presented in various...
nominations, but after three seasons she grew dissatisfied and left the series. Thomas, who also produced the show, reportedly didn't appreciate Jean's departing the successful series, and her character was killed off rather than recast. This was the first TV character to be killed off a family sitcom. Marjorie Lord
Marjorie Lord
Marjorie Lord is an American television and film actress. She played Kathy "Clancy" Williams opposite Danny Thomas on Make Room for Daddy and later Make Room for Granddaddy.-Early life and career:...
was cast a year later as Danny's second wife and played against Thomas successfully for several seasons. Hagen starred in the 1957 Alfred Hitchcock Presents, Season 3, Episode 7, entitled "Enough Rope for Two". She appeared as Frida Daniels in The Shaggy Dog
The Shaggy Dog (1959 film)
The Shaggy Dog is a black and white 1959 Walt Disney film about Wilby Daniels, a teenage boy who is transformed into an Old English Sheepdog by an enchanted ring of the Borgias. The film was based on the story, The Hound of Florence by Felix Salten...
starring with Fred MacMurray
Fred MacMurray
Frederick Martin "Fred" MacMurray was an American actor who appeared in more than 100 movies and a successful television series during a career that spanned nearly a half-century, from 1930 to the 1970s....
. In 1960, she appeared as "Elizabeth" in the episode "Once Upon a Knight" of CBS's anthology series The DuPont Show with June Allyson
The DuPont Show with June Allyson
The DuPont Show with June Allyson is an American anthology drama series which aired on CBS from September 21, 1959 to April 3, 1961 with rebroadcasts continuing until June 12, 1961...
.

Although she made frequent guest appearances in various television series, she was unable to successfully resume her film career, and for the remainder of her career played supporting roles, such as Marguerite LeHand, personal secretary to Franklin Delano Roosevelt in Sunrise at Campobello
Sunrise at Campobello
Sunrise at Campobello is a 1960 American biographical film made by Dore Schary Productions and Warner Bros. It tells the story of the initial struggle by future President of the United States Franklin Delano Roosevelt and his family when he was stricken with paralysis at the age of 39 in August...
(1960), and the friend of Bette Davis
Bette Davis
Ruth Elizabeth "Bette" Davis was an American actress of film, television and theater. Noted for her willingness to play unsympathetic characters, she was highly regarded for her performances in a range of film genres, from contemporary crime melodramas to historical and period films and occasional...
in Dead Ringer
Dead Ringer (1964 film)
Dead Ringer, also known as Who is Buried in my Grave? is a 1964 thriller film made by Warner Bros. It was directed by Paul Henreid and produced by William H. Wright from a screenplay by Oscar Millard and Albert Beich from the story La Otra by Rian James...
(1964). In the 1960s, Hagen's health began to decline and she spent many years hospitalised or under medical care.