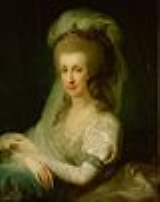 Encyclopedia
Infanta Maria Luisa of Spain (Spanish
Spanish language
Spanish , also known as Castilian , is a Romance language in the Ibero-Romance group that evolved from several languages and dialects in central-northern Iberia around the 9th century and gradually spread with the expansion of the Kingdom of Castile into central and southern Iberia during the...
: María Luisa, German
German language
German is a West Germanic language, related to and classified alongside English and Dutch. With an estimated 90 – 98 million native speakers, German is one of the world's major languages and is the most widely-spoken first language in the European Union....
: Maria Ludovika) (24 November 1745 – 15 May 1792) was Holy Roman Empress, German Queen, Queen of Bohemia and Hungary as the spouse of Leopold II, Holy Roman Emperor
Leopold II, Holy Roman Emperor
Leopold II , born Peter Leopold Joseph Anton Joachim Pius Gotthard, was Holy Roman Emperor and King of Hungary and Bohemia from 1790 to 1792, Archduke of Austria and Grand Duke of Tuscany from 1765 to 1790. He was a son of Emperor Francis I and his wife, Empress Maria Theresa...
.

Maria Louisa was born in Portici
Portici
Portici is a town and comune of the Province of Naples in the Campania region of southern Italy. It is the site of the Portici Royal Palace.-Geography:...
, in Campania
Campania
Campania is a region in southern Italy. The region has a population of around 5.8 million people, making it the second-most-populous region of Italy; its total area of 13,590 km² makes it the most densely populated region in the country...
, the site of the summer palace (Reggia di Portici) of her parents, King Charles, King of Naples and Sicily
Charles III of Spain
Charles III was the King of Spain and the Spanish Indies from 1759 to 1788. He was the eldest son of Philip V of Spain and his second wife, the Princess Elisabeth Farnese...
and Maria Amalia of Saxony
Maria Amalia of Saxony
Maria Amalia of Saxony was a German princess from the House of Wettin and was the wife of Charles III of Spain; she was the Queen consort of Naples and Sicily from 1738 till 1759 and then Queen consort of Spain from 1759 until her death in 1760...
. She was the fifth daughter, and second surviving child, of her parents. Her father became King of Spain as Charles III in 1759, and she moved with her family to Spain. Her first cousins included Louis XVI, Maria I of Portugal
Maria I of Portugal
Maria I was Queen regnant of Portugal and the Algarves from 1777 until her death. Known as Maria the Pious , or Maria the Mad , she was the first undisputed Queen regnant of Portugal...
and Charles Emmanuel IV of Sardinia
Charles Emmanuel IV of Sardinia
Charles Emmanuel IV was King of Sardinia from 1796 to 1802. He abdicated in favour of his brother Victor Emmanuel I...
.

On 16 February 1764 she was married by proxy at Madrid
Madrid
Madrid is the capital and largest city of Spain. The population of the city is roughly 3.3 million and the entire population of the Madrid metropolitan area is calculated to be 6.271 million. It is the third largest city in the European Union, after London and Berlin, and its metropolitan...
to Archduke Peter Leopold, the second son of Emperor Francis I
Francis I, Holy Roman Emperor
Francis I was Holy Roman Emperor and Grand Duke of Tuscany, though his wife effectively executed the real power of those positions. With his wife, Maria Theresa, he was the founder of the Habsburg-Lorraine dynasty...
and Empress Maria Theresa of Austria
Maria Theresa of Austria
Maria Theresa Walburga Amalia Christina was the only female ruler of the Habsburg dominions and the last of the House of Habsburg. She was the sovereign of Austria, Hungary, Croatia, Bohemia, Mantua, Milan, Lodomeria and Galicia, the Austrian Netherlands and Parma...
, and the heir apparent
Heir apparent
An heir apparent or heiress apparent is a person who is first in line of succession and cannot be displaced from inheriting, except by a change in the rules of succession....
to the Grand Duchy of Tuscany
Grand Duchy of Tuscany
The Grand Duchy of Tuscany was a central Italian monarchy that existed, with interruptions, from 1569 to 1859, replacing the Duchy of Florence. The grand duchy's capital was Florence...
. The next year, on 5 August, she married him in person at Innsbruck
Innsbruck
- Main sights :- Buildings :*Golden Roof*Kaiserliche Hofburg *Hofkirche with the cenotaph of Maximilian I, Holy Roman Emperor*Altes Landhaus...
. Only a few days later, the death of Emperor Francis made Maria Louisa's husband the new Grand Duke of Tuscany, and the newly married couple moved to Florence
Florence
Florence is the capital city of the Italian region of Tuscany and of the province of Florence. It is the most populous city in Tuscany, with approximately 370,000 inhabitants, expanding to over 1.5 million in the metropolitan area....
, where they would live for the next twenty-five years.

In 1790, on the death of Peter Leopold's childless brother, Joseph II
Joseph II, Holy Roman Emperor
Joseph II was Holy Roman Emperor from 1765 to 1790 and ruler of the Habsburg lands from 1780 to 1790. He was the eldest son of Empress Maria Theresa and her husband, Francis I...
, Maria Luisa's husband inherited the Habsburg
Habsburg
The House of Habsburg , also found as Hapsburg, and also known as House of Austria is one of the most important royal houses of Europe and is best known for being an origin of all of the formally elected Holy Roman Emperors between 1438 and 1740, as well as rulers of the Austrian Empire and...
lands in Central Europe, and was shortly thereafter elected Holy Roman Emperor. Taking the name of Leopold II, the new Emperor moved his family to Vienna
Vienna
Vienna is the capital and largest city of the Republic of Austria and one of the nine states of Austria. Vienna is Austria's primary city, with a population of about 1.723 million , and is by far the largest city in Austria, as well as its cultural, economic, and political centre...
, where Maria Luisa took on the role of imperial consort. Leopold died scarcely two years later, dying on 1 March 1792. Maria Luisa followed her husband to the grave in less than three months, not living long enough to see her eldest son Francis elected as the last Holy Roman Emperor.