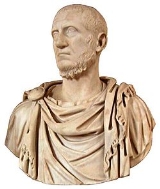 Encyclopedia
Tacitus was Roman Emperor
Roman Emperor
The Roman emperor was the ruler of the Roman State during the imperial period . The Romans had no single term for the office although at any given time, a given title was associated with the emperor...
from 275 to 276. During his short reign he campaigned against the Goths
Goths
The Goths were an East Germanic tribe of Scandinavian origin whose two branches, the Visigoths and the Ostrogoths, played an important role in the fall of the Roman Empire and the emergence of Medieval Europe....
and the Heruli
Heruli
The Heruli were an East Germanic tribe who are famous for their naval exploits. Migrating from Northern Europe to the Black Sea in the third century They were part of the...
, for which he received the title Gothicus Maximus.

Tacitus was born in Interamna
Terni
Terni is a city in southern Umbria, central Italy, capital of the province of Terni, located in the plain of the Nera river. It is 104 km N of Rome, 36 km NW of Rieti, and 29 km S of Spoleto.-History:...
(Terni), in Italia
Italia (Roman province)
Italia was the name of the Italian peninsula of the Roman Empire.-Under the Republic and Augustan organization:During the Republic and the first centuries of the empire, Italia was not a province, but rather the territory of the city of Rome, thus having a special status: for example, military...
. He circulated copies of the historian Gaius Cornelius Tacitus' work, which was barely read at the time, and so we perhaps have him to thank for the partial survival of Tacitus' work; however, modern historiography rejects his claimed descent from the historian as forgery. In the course of his long life he discharged the duties of various civil offices, including that of consul
Consul
Consul was the highest elected office of the Roman Republic and an appointive office under the Empire. The title was also used in other city states and also revived in modern states, notably in the First French Republic...
in 273, with universal respect.

His next action was to move against the barbarian mercenaries that had been gathered by Aurelian to supplement Roman forces for his Eastern campaign. These mercenaries had plundered several towns in the Eastern Roman provinces after Aurelian had been murdered and the campaign cancelled. His half-brother, the Praetorian Prefect Florianus
Florianus
-Biography: Florian was reportedly a maternal half-brother to the Emperor Marcus Claudius Tacitus. Appointed Praetorian Prefect in Tacitus's army in his campaign against the Goths, according to the available sources, he was chosen by the army in the West to succeed Tacitus in 276, without the...
, and Tacitus himself won a victory against these tribes, among which were the Heruli
Heruli
The Heruli were an East Germanic tribe who are famous for their naval exploits. Migrating from Northern Europe to the Black Sea in the third century They were part of the...
, which gained the emperor the title Gothicus Maximus.

He was on his way back west to deal with a Frankish
Franks
The Franks were a confederation of Germanic tribes first attested in the third century AD as living north and east of the Lower Rhine River. From the third to fifth centuries some Franks raided Roman territory while other Franks joined the Roman troops in Gaul. Only the Salian Franks formed a...
and Alamanni
Alamanni
The Alamanni, Allemanni, or Alemanni were originally an alliance of Germanic tribes located around the upper Rhine river . One of the earliest references to them is the cognomen Alamannicus assumed by Roman Emperor Caracalla, who ruled the Roman Empire from 211 to 217 and claimed thereby to be...
c invasion of Gaul
Roman Gaul
Roman Gaul consisted of an area of provincial rule in the Roman Empire, in modern day France, Belgium, Luxembourg, and western Germany. Roman control of the area lasted for less than 500 years....
when, (according to Aurelius Victor
Aurelius Victor
Sextus Aurelius Victor was a historian and politician of the Roman Empire.Aurelius Victor was the author of a History of Rome from Augustus to Julian , published ca. 361. Julian honoured him and appointed him prefect of Pannonia Secunda...
, Eutropius and the Historia Augusta), Tacitus died of fever at Tyana
Tyana
Tyana or Tyanna was an ancient city in the Anatolian region of Cappadocia, in modern south-central Turkey. It was the capital of a Luwian-speaking Neo-Hittite kingdom in the 1st millennium BC.-History:...
in Cappadocia
Cappadocia
Cappadocia is a historical region in Central Anatolia, largely in Nevşehir Province.In the time of Herodotus, the Cappadocians were reported as occupying the whole region from Mount Taurus to the vicinity of the Euxine...
in June 276. It was reported that he began acting strangely, declaring that he would alter the names of the months to honor himself before succumbing to a fever. In a contrary account, Zosimus
Zosimus
Zosimus was a Byzantine historian, who lived in Constantinople during the reign of the Byzantine Emperor Anastasius I . According to Photius, he was a comes, and held the office of "advocate" of the imperial treasury.- Historia Nova :...
claims he was assassinated, after appointing one of his relatives to an important command in Syria.