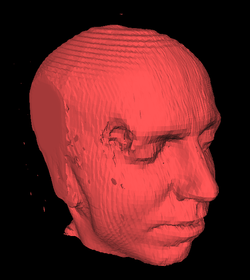 Marching cubes is a computer graphics
Computer graphics
Computer graphics are graphics created using computers and, more generally, the representation and manipulation of image data by a computer with help from specialized software and hardware....
algorithm
Algorithm
In mathematics and computer science, an algorithm is an effective method expressed as a finite list of well-defined instructions for calculating a function. Algorithms are used for calculation, data processing, and automated reasoning...
, published in the 1987 SIGGRAPH
SIGGRAPH
SIGGRAPH is the name of the annual conference on computer graphics convened by the ACM SIGGRAPH organization. The first SIGGRAPH conference was in 1974. The conference is attended by tens of thousands of computer professionals...
proceedings by Lorensen and Cline, for extracting a polygonal mesh of an isosurface
Isosurface
An isosurface is a three-dimensional analog of an isoline. It is a surface that represents points of a constant value within a volume of space; in other words, it is a level set of a continuous function whose domain is 3D-space.Isosurfaces are normally displayed using computer graphics, and are...
from a three-dimensional scalar field
Scalar field
In mathematics and physics, a scalar field associates a scalar value to every point in a space. The scalar may either be a mathematical number, or a physical quantity. Scalar fields are required to be coordinate-independent, meaning that any two observers using the same units will agree on the...
(sometimes called voxel
Voxel
A voxel is a volume element, representing a value on a regular grid in three dimensional space. This is analogous to a pixel, which represents 2D image data in a bitmap...
s). An analogous two-dimensional method is called the marching squares
Marching squares
Marching squares is a computer graphics algorithm that generates contours for a two-dimensional scalar field...
algorithm.

The algorithm proceeds through the scalar field, taking eight neighbor locations at a time (thus forming an imaginary cube), then determining the polygon(s) needed to represent the part of the isosurface that passes through this cube. The individual polygons are then fused into the desired surface.

) within the cube, by treating each of the 8 scalar values as a bit in an 8-bit integer. If the scalar's value is higher than the iso-value (i.e., it is inside the surface) then the appropriate bit is set to one, while if it is lower (outside), it is set to zero. The final value after all 8 scalars are checked, is the actual index to the polygon indices array.

Finally each vertex of the generated polygons is placed on the appropriate position along the cube's edge by linearly interpolating the two scalar values that are connected by that edge.

Their first published version exploited rotational and reflective symmetry and also sign changes to build the table with 15 unique cases. Unfortunately they made some mistakes. The minor one was that "case 14" - the 15th, because they started at "case 0" - was actually a symmetric image of case 11, but more importantly their base cases could lead to topological wrong decisions. For example case 11 should fit to a rotated and sign changed version of case 3, but it didn't. This led to non-watertight surfaces produced by their algorithm.

The problem was that for cases where you have "rippling" signs, you can have at least two correct choices for where the correct contour should pass. It actually doesn't matter which choice you take, but you have to make this choice topologically consistent. Their original cases made consistent choices, but the sign change could lead to mistakes. Thus, a corrected table includes their 14 unique cases, plus 14 correct sign changed cases, so 28 cases in total.

The Marching Cubes algorithm is claimed by anti-software patent advocates as a prime example in the graphics field of the woes of patenting software
Software patent
Software patent does not have a universally accepted definition. One definition suggested by the Foundation for a Free Information Infrastructure is that a software patent is a "patent on any performance of a computer realised by means of a computer program".In 2005, the European Patent Office...
. An implementation was patented (United States Patent 4,710,876) despite being a relatively obvious solution to the surface-generation problem, they claim. Another similar algorithm was developed, called Marching Tetrahedrons
Marching Tetrahedrons
Marching tetrahedrons is an algorithm in the field of computer graphics to render implicit surfaces. It clarifies a minor ambiguity problem of marching cubes with some cube configurations....
, in order to circumvent the patent as well as solve a minor ambiguity problem of marching cubes with some cube configurations. This patent expired in 2005, and it is now legal for the graphics community to use it without royalties since more than 17 years have passed from its issue date (December 1, 1987).