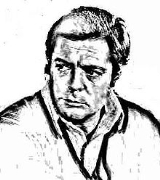 Encyclopedia
Marcello Vincenzo Domenico Mastroianni, Knight Grand Cross
Omri
Omri was a king of Israel, successful military campaigner and first in the line of Omride kings that included Ahab, Ahaziah and Joram.He was "commander of the army" of king Elah when Zimri murdered Elah and made himself king. Instead, the troops at Gibbethon chose Omri as king, and he led them to...
(marˈtʃɛllo mastroˈjanni; 28 September 1924 – 19 December 1996) was an Italian film actor. His honours included British Film Academy
British Academy of Film and Television Arts
The British Academy of Film and Television Arts is a charity in the United Kingdom that hosts annual awards shows for excellence in film, television, television craft, video games and forms of animation.-Introduction:...
Awards, Best Actor awards at the Cannes Film Festival
Cannes Film Festival
The Cannes International Film Festival , is an annual film festival held in Cannes, France, which previews new films of all genres including documentaries from around the world. Founded in 1946, it is among the world's most prestigious and publicized film festivals...
and two Golden Globe Awards.

Mastroianni was born in Fontana Liri
Fontana Liri
Fontana Liri is a comune in the Province of Frosinone in the Italian region Lazio, located about 90 km southeast of Rome and about 15 km east of Frosinone...
, a small village in the Apennines
Apennine mountains
The Apennines or Apennine Mountains or Greek oros but just as often used alone as a noun. The ancient Greeks and Romans typically but not always used "mountain" in the singular to mean one or a range; thus, "the Apennine mountain" refers to the entire chain and is translated "the Apennine...
in the province of Frosinone
Province of Frosinone
The Province of Frosinone is a province in the Lazio region of Italy, with 91 comuni . Its capital is the city of Frosinone. It has an area of 3,244 km², and a total population of 489,042 .The Province was established by Royal Decree on 6 December 1926 with territories belonging to Lazio...
, Lazio, and grew up in Turin
Turin
Turin is a city and major business and cultural centre in northern Italy, capital of the Piedmont region, located mainly on the left bank of the Po River and surrounded by the Alpine arch. The population of the city proper is 909,193 while the population of the urban area is estimated by Eurostat...
and Rome
Rome
Rome is the capital of Italy and the country's largest and most populated city and comune, with over 2.7 million residents in . The city is located in the central-western portion of the Italian Peninsula, on the Tiber River within the Lazio region of Italy.Rome's history spans two and a half...
. He was the son of Ida (née Irolle) and Ottone Mastroianni, who ran a carpentry shop, and the nephew of the Italian sculptor Umberto Mastroianni (1910–1998). During World War II, after the division into Axis and Allied Italy, he was interned in a loosely guarded German prison camp, from which he escaped to hide in Venice
Venice
Venice is a city in northern Italy which is renowned for the beauty of its setting, its architecture and its artworks. It is the capital of the Veneto region...
. Mastroianni married Italian actress Flora Carabella (1926–1999) in 1950. They separated in the early 1960s but remained legally married until his death. They had one child together, Barbara. After the separation, he cohabited with actress Faye Dunaway
Faye Dunaway
Faye Dunaway is an American actress.Dunaway won an Academy Award for Best Actress for her performance in Network after receiving previous nominations for the critically acclaimed films Bonnie and Clyde and Chinatown...
for two years. His brother Ruggero Mastroianni
Ruggero Mastroianni
Ruggero Mastroianni was an Italian film editor; Tony Sloman has called him "arguably, the finest Italian film editor of his generation."Born in Turin, he was the brother of the actor Marcello Mastroianni...
(1929–1996) was a highly regarded film editor who not only edited a number of his brother's films, but appeared alongside Marcello in Scipione detto anche l'Africano, a spoof of the once popular peplum
Peplum
Peplum originates in the Greek word for 'tunic' and may refer to one of the following:*A genre of Italian films also known as 'Sword and Sandal'*Peplos, a kind of women's garment in ancient Greece*Veil...
/sword and sandal film genre released in 1971.

Mastroianni cohabited with author and filmmaker Anna Maria Tatò
Anna Maria Tatò
Anna Maria Tatò is an Italian film director. She directed six films between 1978 and 1997. Her film Marcello Mastroianni: mi ricordo, sì, io mi ricordo was screened in the Un Certain Regard section at the 1997 Cannes Film Festival....
for the last 21 years of his life. Both of his daughters, as well as Deneuve and Tato, were at his bedside when he died of pancreatic cancer
Pancreatic cancer
Pancreatic cancer refers to a malignant neoplasm of the pancreas. The most common type of pancreatic cancer, accounting for 95% of these tumors is adenocarcinoma, which arises within the exocrine component of the pancreas. A minority arises from the islet cells and is classified as a...
at the age of 72. The Trevi Fountain
Trevi Fountain
The Trevi Fountain is a fountain in the Trevi rione in Rome, Italy. Standing 26 metres high and 20 metres wide, it is the largest Baroque fountain in the city and one of the most famous fountains in the world....
in Rome, associated with his role in Fellini's La dolce vita, was symbolically turned off and draped in black as a tribute.

Mastroianni, Dean Stockwell
Dean Stockwell
Dean Stockwell is an American actor of film and television, with a career spanning over 65 years. As a child actor under contract to MGM he first came to the public's attention in films such as Anchors Aweigh and The Green Years; as a young adult he played a lead role in the 1957 Broadway and...
and Jack Lemmon
Jack Lemmon
John Uhler "Jack" Lemmon III was an American actor and musician. He starred in more than 60 films including Some Like It Hot, The Apartment, Mister Roberts , Days of Wine and Roses, The Great Race, Irma la Douce, The Odd Couple, Save the Tiger John Uhler "Jack" Lemmon III (February 8, 1925June...
are the only actors to have been twice awarded the Best Actor at the Cannes Film Festival
Cannes Film Festival
The Cannes International Film Festival , is an annual film festival held in Cannes, France, which previews new films of all genres including documentaries from around the world. Founded in 1946, it is among the world's most prestigious and publicized film festivals...
. Mastroianni won it in 1970 for Dramma della gelosia - tutti i particolari in cronaca and in 1987 for Dark Eyes.