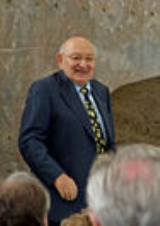 Encyclopedia
Marcel Reich-Ranicki is a Polish
Poland
Poland , officially the Republic of Poland , is a country in Central Europe bordered by Germany to the west; the Czech Republic and Slovakia to the south; Ukraine, Belarus and Lithuania to the east; and the Baltic Sea and Kaliningrad Oblast, a Russian exclave, to the north...
-born German literary critic and member of the literary group Gruppe 47. He is regarded as one of the most influential contemporary literary critics in the field of German literature and therefore was in Germany often called the 'Pope of literature' (Literaturpapst).

Marcel Reich-Ranicki was born Marcel Reich on June 2, 1920, at Włocławek, Poland
Poland
Poland , officially the Republic of Poland , is a country in Central Europe bordered by Germany to the west; the Czech Republic and Slovakia to the south; Ukraine, Belarus and Lithuania to the east; and the Baltic Sea and Kaliningrad Oblast, a Russian exclave, to the north...
, to David Reich, a Polish-Jewish merchant, and his wife Helene Auerbach Reich, who came from a German-Jewish family. Reich moved with his family to Berlin
Berlin
Berlin is the capital city of Germany and is one of the 16 states of Germany. With a population of 3.45 million people, Berlin is Germany's largest city. It is the second most populous city proper and the seventh most populous urban area in the European Union...
in 1929. As a Polish Jew he was deported to Poland in the so-called “Polenaktion” on October 28, 1938, together with more than 12,000 Polish-born Jews. In November 1940 Reich and his parents found themselves in the Warsaw Ghetto
Warsaw Ghetto
The Warsaw Ghetto was the largest of all Jewish Ghettos in Nazi-occupied Europe during World War II. It was established in the Polish capital between October and November 15, 1940, in the territory of General Government of the German-occupied Poland, with over 400,000 Jews from the vicinity...
. During his stay there he worked for the Judenrat
Judenrat
Judenräte were administrative bodies during the Second World War that the Germans required Jews to form in the German occupied territory of Poland, and later in the occupied territories of the Soviet Union It is the overall term for the enforcement bodies established by the Nazi occupiers to...
as a chief translator, and also contributed to the collaborative newspaper Gazeta Żydowska (The Jewish Newspaper) as a music critic. He married his wife, Teofila, on July 22, 1942, the first day of the mass transports to the Treblinka extermination camp. In 1943 they managed to escape to the "Aryan side". Their parents did not survive.

From 1948 to 1949 he was a Polish consul-general and intelligence worker (operating under the pseudonym ‘Ranicki') in London. He was recalled from London in 1949, sacked from the intelligence service and expelled from the Party on charges of "cosmopolitanism
Rootless Cosmopolitans
-Track listing:# "I Should Care" – 1:17# "Shortly After Takeoff" – 4:14# "The Wind Cries Mary" – 5:01# "Friendly Ghosts" – 5:20...
" and Trotskyism
Trotskyism
Trotskyism is the theory of Marxism as advocated by Leon Trotsky. Trotsky considered himself an orthodox Marxist and Bolshevik-Leninist, arguing for the establishment of a vanguard party of the working-class...
. He then took a position with the publishing house of the Polish Defence Ministry, where he established a section publishing literature by contemporary authors from the German Democratic Republic
German Democratic Republic
The German Democratic Republic , informally called East Germany by West Germany and other countries, was a socialist state established in 1949 in the Soviet zone of occupied Germany, including East Berlin of the Allied-occupied capital city...
. Subsequently he developed a freelance career writing and broadcasting about German literature.

Frustrated by the curtailment of his liberty in the People's Republic of Poland
People's Republic of Poland
The People's Republic of Poland was the official name of Poland from 1952 to 1990. Although the Soviet Union took control of the country immediately after the liberation from Nazi Germany in 1944, the name of the state was not changed until eight years later...
he emigrated in 1958 with his wife and son to the Federal Republic of Germany
West Germany
West Germany is the common English, but not official, name for the Federal Republic of Germany or FRG in the period between its creation in May 1949 to German reunification on 3 October 1990....
. Here he began writing for leading German periodicals, including Die Welt
Die Welt
Die Welt is a German national daily newspaper published by the Axel Springer AG company.It was founded in Hamburg in 1946 by the British occupying forces, aiming to provide a "quality newspaper" modelled on The Times...
and the Frankfurter Allgemeine Zeitung
Frankfurter Allgemeine Zeitung
The Frankfurter Allgemeine Zeitung , short F.A.Z., also known as the FAZ, is a national German newspaper, founded in 1949. It is published daily in Frankfurt am Main. The Sunday edition is the Frankfurter Allgemeine Sonntagszeitung .F.A.Z...
. In Poland he had published under the pseudonym Ranicki, his intelligence codename. On the advice of the arts editor of the Frankfurter Allgemeine he adopted the name Marcel Reich-Ranicki professionally.

From 1960 to 1973 he was literary critic for the German weekly Die Zeit
Die Zeit
Die Zeit is a German nationwide weekly newspaper that is highly respected for its quality journalism.With a circulation of 488,036 and an estimated readership of slightly above 2 million, it is the most widely read German weekly newspaper...
, published in Hamburg. From 1973 to 1988 he was head of the literature staff at the daily Frankfurter Allgemeine Zeitung
Frankfurter Allgemeine Zeitung
The Frankfurter Allgemeine Zeitung , short F.A.Z., also known as the FAZ, is a national German newspaper, founded in 1949. It is published daily in Frankfurt am Main. The Sunday edition is the Frankfurter Allgemeine Sonntagszeitung .F.A.Z...
. His successor was Frank Schirrmacher
Frank Schirrmacher
Frank Schirrmacher is a German journalist, doctored literature expert and essayist, writer, and since 1994 co-publisher of the national German newspaper Frankfurter Allgemeine Zeitung.-Education:...
. Currently Reich-Ranicki edits the "Frankfurter Anthologie" in that newspaper. In 1968 and 1969 he taught at American universities. From 1971 to 1975 he held visiting professorships at Stockholm
Stockholm
Stockholm is the capital and the largest city of Sweden and constitutes the most populated urban area in Scandinavia. Stockholm is the most populous city in Sweden, with a population of 851,155 in the municipality , 1.37 million in the urban area , and around 2.1 million in the metropolitan area...
and Uppsala
Uppsala
- Economy :Today Uppsala is well established in medical research and recognized for its leading position in biotechnology.*Abbott Medical Optics *GE Healthcare*Pfizer *Phadia, an offshoot of Pharmacia*Fresenius*Q-Med...
. Since 1974 he has been an honorary professor at the University of Tübingen. In 1990 he received the Heine visiting professorship at the University of Düsseldorf, and in 1991 he received the Heinrich-Hertz visiting professorship of the University of Karlsruhe.

From 1988 to 2002 Reich-Ranicki hosted the literary talk show Literarisches Quartett on the German public television broadcaster ZDF
ZDF
Zweites Deutsches Fernsehen , ZDF, is a public-service German television broadcaster based in Mainz . It is run as an independent non-profit institution, which was founded by the German federal states . The ZDF is financed by television licence fees called GEZ and advertising revenues...
. Through the show he became a household name in Germany. The show was followed by a similar show that consisted of him talking about old and new books in front of a studio audience. Following the publication of Too Far Afield by his fellow Gruppe 47 member Günter Grass
Günter Grass
Günter Wilhelm Grass is a Nobel Prize-winning German author, poet, playwright, sculptor and artist.He was born in the Free City of Danzig...
, Reich-Ranicki appeared on the cover of the magazine Der Spiegel
Der Spiegel
Der Spiegel is a German weekly news magazine published in Hamburg. It is one of Europe's largest publications of its kind, with a weekly circulation of more than one million.-Overview:...
, tearing the novel apart. The magazine included his unfavorable review of the book. However, Reich-Ranicki praised Grass' next book, Crabwalk. Having written about German literature for most of his life, Reich-Ranicki published books about American and Polish literature, after cutting down on his television appearances.

In February 2006 he received the Honorary degree
Honorary degree
An honorary degree or a degree honoris causa is an academic degree for which a university has waived the usual requirements, such as matriculation, residence, study, and the passing of examinations...
(Doctor Philosophiae Honoris Causa) of the Tel Aviv University
Tel Aviv University
Tel Aviv University is a public university located in Ramat Aviv, Tel Aviv, Israel. With nearly 30,000 students, TAU is Israel's largest university.-History:...
. The university will establish an endowed chair
Chair (official)
The chairman is the highest officer of an organized group such as a board, committee, or deliberative assembly. The person holding the office is typically elected or appointed by the members of the group. The chairman presides over meetings of the assembled group and conducts its business in an...
for German literature named after Reich-Ranicki. In February 2007 the Humboldt-Universität zu Berlin awarded an honorary degree to Reich-Ranicki. This is the same university that Reich-Ranicki applied to in 1938, his application having been turned down because of his Jewish ancestry.

In October 2008, he was awarded a lifetime achievement award during a German television awards telecast for Literarisches Quartett. He made headlines with his acceptance speech, in which he spurned the prize and criticized the state of German television. His 1999 autobiography, Mein Leben (The Author of Himself: The Life of Marcel Reich-Ranicki), mainly dealing with life and survival during the war, was filmed for public television and broadcast in April 2009. His son, Andrew Ranicki, is a professor of mathematics at Edinburgh University. His wife died in 2011.