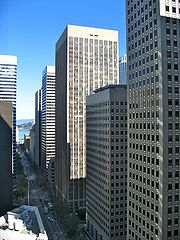 Manhattanization is a neologism coined to describe the construction of many tall or densely situated buildings which transforms the appearance and character of a city. It was a pejorative word used by critics of the highrise buildings built in San Francisco
San Francisco, California
San Francisco , officially the City and County of San Francisco, is the financial, cultural, and transportation center of the San Francisco Bay Area, a region of 7.15 million people which includes San Jose and Oakland...
during the 1960s and 1970s, who claimed the skyscraper
Skyscraper
A skyscraper is a tall, continuously habitable building of many stories, often designed for office and commercial use. There is no official definition or height above which a building may be classified as a skyscraper...
s would block views of the bay and the surrounding hills. The term has also gained usage as a buzzword
Buzzword
A buzzword is a term of art, salesmanship, politics, or technical jargon that is used in the media and wider society outside of its originally narrow technical context....
for recent high-density developments in Las Vegas, Nevada
Nevada
Nevada is a state in the western, mountain west, and southwestern regions of the United States. With an area of and a population of about 2.7 million, it is the 7th-largest and 35th-most populous state. Over two-thirds of Nevada's people live in the Las Vegas metropolitan area, which contains its...
.

The term "Manhattanization" has been used to describe the 2003-2008 boom of real estate developments in Miami
Miami, Florida
Miami is a city located on the Atlantic coast in southeastern Florida and the county seat of Miami-Dade County, the most populous county in Florida and the eighth-most populous county in the United States with a population of 2,500,625...
, that brought the construction of more than 50 high rise buildings throughout the city, primarily in the Downtown Miami
Downtown Miami
Downtown Miami is an urban residential neighborhood, and the central business district of Miami, Miami-Dade County, and South Florida in the United States...
, Brickell
Brickell
Brickell is an urban neighborhood in Miami, Florida, United States. A neighborhood of greater Downtown Miami, Brickell is Miami and South Florida's major financial district.-Background:...
and Edgewater neighborhoods.
The source of this article is wikipedia, the free encyclopedia.  The text of this article is licensed under the GFDL.