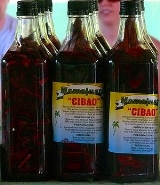 Encyclopedia
Mama Juana is a drink from the Dominican Republic
Dominican Republic
The Dominican Republic is a nation on the island of La Hispaniola, part of the Greater Antilles archipelago in the Caribbean region. The western third of the island is occupied by the nation of Haiti, making Hispaniola one of two Caribbean islands that are shared by two countries...
that is concocted by allowing rum
Rum
Rum is a distilled alcoholic beverage made from sugarcane by-products such as molasses, or directly from sugarcane juice, by a process of fermentation and distillation. The distillate, a clear liquid, is then usually aged in oak barrels...
, red wine, and honey
Honey
Honey is a sweet food made by bees using nectar from flowers. The variety produced by honey bees is the one most commonly referred to and is the type of honey collected by beekeepers and consumed by humans...
to soak in a bottle with tree bark and herb
Herb
Except in botanical usage, an herb is "any plant with leaves, seeds, or flowers used for flavoring, food, medicine, or perfume" or "a part of such a plant as used in cooking"...
s. The taste is quite similar to port wine
Port wine
Port wine is a Portuguese fortified wine produced exclusively in the Douro Valley in the northern provinces of Portugal. It is typically a sweet, red wine, often served as a dessert wine, and comes in dry, semi-dry, and white varieties...
and the color is a deep red. The specific herbs that make up Mamajuana were originally prepared as an herbal tea by the native Taino Indians and much later in time, post-Columbus, alcohol was added to the recipe. Besides being rumored to be an aphrodisiac
Aphrodisiac
An aphrodisiac is a substance that increases sexual desire. The name comes from Aphrodite, the Greek goddess of sexuality and love. Throughout history, many foods, drinks, and behaviors have had a reputation for making sex more attainable and/or pleasurable...
, with many natives of the Dominican Republic claiming that the drink has similar effects, Mamajuana is also consumed for its medicinal value. The alcohol is said to act as an extract base that pulls the herbs' curative properties, creating an herbal tincture that is often served as a shot. The reported positive effects on health vary, ranging from a flu remedy, to a digestion and circulation aid, a blood cleanser and kidney and liver tonic.

Origin of the name: Mama Juana (or mamajuana) comes from the English word Demijohn, which refers to a large squat bottle with a short narrow neck, usually covered in wicker
Wicker
Wicker is hard woven fiber formed into a rigid material, usually used for baskets or furniture. Wicker is often made of material of plant origin, but plastic fibers are also used....
. The word is thought to be derived from the French Dame Jeanne (Lady Jane), a term which is also still used to describe this bottle. In the Spanish speaking countries, Dame Jeanne was transformed into "damajuana", or Dama Juana and later,in the Dominican Republic, into Mama Juana (mother Jane). For this reason it is easy to see why there are many different variations of recipes to make Mamajuana, since the name refers to the container/bottle originally used to prepare and store the maceration, rather than to the finished product itself.

Preparation: Basically, Mama Juana is a mixture of bark and herbs left to soak in rum (most often dark rum but the use of white rum is not uncommon), red wine and honey. The solid ingredients (local leaves, sticks and roots) vary from region to region but usually include some of the following:

In addition to the above standard recipe, it is common for individuals to add other ingredients such as cinnamon
Cinnamon
Cinnamon is a spice obtained from the inner bark of several trees from the genus Cinnamomum that is used in both sweet and savoury foods...
, raisin
Raisin
Raisins are dried grapes. They are produced in many regions of the world. Raisins may be eaten raw or used in cooking, baking and brewing...
s, molasses
Molasses
Molasses is a viscous by-product of the processing of sugar cane, grapes or sugar beets into sugar. The word molasses comes from the Portuguese word melaço, which ultimately comes from mel, the Latin word for "honey". The quality of molasses depends on the maturity of the sugar cane or sugar beet,...
, and lemon or lime juice. The concoction is usually kept at room temperature and served in a shot glass
Shot glass
A shot glass is a small glass designed to hold or measure spirits or liquor, which is either drunk straight from the glass or poured into a mixed drink....
. As with many other alcoholic drinks the longer the maker lets it sit the better it tastes.

Recipes for what to do with this concoction vary a bit, but common advice from Dominicans is to first remove the bitterness from the elements above by soaking in red wine for a week or so, turning every once in a while, then throwing the wine out. Then, fill the bottle of soaked bark/herbs with 1/4 honey and 3/4 dark rum, possibly adding vanilla
Vanilla
Vanilla is a flavoring derived from orchids of the genus Vanilla, primarily from the Mexican species, Flat-leaved Vanilla . The word vanilla derives from the Spanish word "", little pod...
, ginger
Ginger
Ginger is the rhizome of the plant Zingiber officinale, consumed as a delicacy, medicine, or spice. It lends its name to its genus and family . Other notable members of this plant family are turmeric, cardamom, and galangal....
or cinnamon sticks if you like those flavors. After a few days, drink, then repeat the honey/rum mixture until the flavor of the bark/herbs disappears. Some say you can do this 15 to 20 times, while others say a single concoction of bark/herbs can be used for years.

Mamajuana is commercialized in two ways;
1. bottle (or a bag) with the ingredients, a do-it-yourself version. You need to take care of the curing and maceration process yourself.
2. Ready-to-drink, a finished product which has undergone the complete process and afterwards it is filtered and bottled.
The source of this article is wikipedia, the free encyclopedia.  The text of this article is licensed under the GFDL.