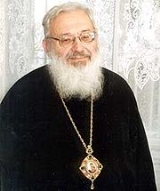 Encyclopedia
In the Eastern Catholic Churches, major archbishop is a title for an hierarch
Ordinary
In those hierarchically organised churches of Western Christianity which have an ecclesiastical law system, an ordinary is an officer of the church who by reason of office has ordinary power to execute the church's laws...
to whose archiepiscopal see is granted the same jurisdiction in his autonomous (sui juris) particular Church
Particular Church
In Catholic canon law, a Particular Church is an ecclesial community headed by a bishop or someone recognised as the equivalent of a bishop.There are two kinds of particular Churches:# Local particular Churches ...
that an Eastern patriarch
Patriarch
Originally a patriarch was a man who exercised autocratic authority as a pater familias over an extended family. The system of such rule of families by senior males is called patriarchy. This is a Greek word, a compound of πατριά , "lineage, descent", esp...
has in his.

The title is used for archbishop
Archbishop
An archbishop is a bishop of higher rank, but not of higher sacramental order above that of the three orders of deacon, priest , and bishop...
s of episcopal sees
Episcopal See
An episcopal see is, in the original sense, the official seat of a bishop. This seat, which is also referred to as the bishop's cathedra, is placed in the bishop's principal church, which is therefore called the bishop's cathedral...
that were founded more recently than the patriarchal sees and are therefore less prestigious. Consequently, there are differences between the two offices. Major archbishops rank immediately below patriarchs in the order of precedence
Catholic Church hierarchy
The term Hierarchy in the Catholic Church has a variety of related usages. Literally, "holy government", the term is employed in different instances. There is a Hierarchy of Truths, which refers to the levels of solemnity of the official teaching of the faith...
of the Catholic Church. If made members of the College of Cardinals
College of Cardinals
The College of Cardinals is the body of all cardinals of the Catholic Church.A function of the college is to advise the pope about church matters when he summons them to an ordinary consistory. It also convenes on the death or abdication of a pope as a papal conclave to elect a successor...
, major archbishops join the order of Cardinal-Priests, whereas patriarchs of the east
Patriarchs of the east
The Patriarchs of the East are generally speaking the head bishops of Eastern Christian traditions mainly in the Middle East. They may be Patriarchs of Orthodox or Catholic churches.-Orthodox Patriarchs of the East:...
join the highest order, Cardinal-Bishops. Like patriarchs, major archbishops are elected by the synod
Synod
A synod historically is a council of a church, usually convened to decide an issue of doctrine, administration or application. In modern usage, the word often refers to the governing body of a particular church, whether its members are meeting or not...
of the sui iuris Church, but their election requires confirmation by the Pope
Pope
The Pope is the Bishop of Rome, a position that makes him the leader of the worldwide Catholic Church . In the Catholic Church, the Pope is regarded as the successor of Saint Peter, the Apostle...
, not mere notification and granting of communion
Full communion
In Christian ecclesiology, full communion is a relationship between church organizations or groups that mutually recognize their sharing the essential doctrines....
required of patriarchs.


In addition to their role governing their particular Church, under canon law all major archbishops are members of the Congregation for the Oriental Churches
Congregation for the Oriental Churches
The Congregation for the Oriental Churches is the dicastery of the Roman Curia responsible for contact with the Eastern Catholic Churches for the sake of assisting their development, protecting their rights and also maintaining whole and entire in the one Catholic Church, alongside the liturgical,...
in the Roman Curia
Roman Curia
The Roman Curia is the administrative apparatus of the Holy See and the central governing body of the entire Catholic Church, together with the Pope...
. They are required to attend the annual general meeting of this congregation, and to attend other sessions if they are visiting Rome or are otherwise able.

The title major archbishop in the Catholic Church is roughly equivalent to the patriarchal title catholicos
Catholicos
Catholicos, plural Catholicoi, is a title used for the head of certain churches in some Eastern Christian traditions. The title implies autocephaly and in some cases is borne by the designated head of an autonomous church, in which case the holder might have other titles such as Patriarch...
in some Orthodox Churches. Catholicos is used internally by the Syro-Malankara Church for their major archbishop.

Suggestions have been made at various times to elevate major archbishops to patriarchs, most notably the major archbishops of the Ukrainians and Syro-Malabars. Popes from Paul VI
Pope Paul VI
Paul VI , born Giovanni Battista Enrico Antonio Maria Montini , reigned as Pope of the Catholic Church from 21 June 1963 until his death on 6 August 1978. Succeeding Pope John XXIII, who had convened the Second Vatican Council, he decided to continue it...
to Benedict XVI
Pope Benedict XVI
Benedict XVI is the 265th and current Pope, by virtue of his office of Bishop of Rome, the Sovereign of the Vatican City State and the leader of the Catholic Church as well as the other 22 sui iuris Eastern Catholic Churches in full communion with the Holy See...
have rejected this suggestion, at least in part, on ecumenical grounds: it is the hope among Christians that these Catholic jurisdictions will one day be reunited with their Orthodox counterparts in a reunification of the Church; hence, establishing a "patriarchate" in Ukraine would be interpreted as an insult to the Russian Orthodox
Russian Orthodox Church
The Russian Orthodox Church or, alternatively, the Moscow Patriarchate The ROC is often said to be the largest of the Eastern Orthodox churches in the world; including all the autocephalous churches under its umbrella, its adherents number over 150 million worldwide—about half of the 300 million...
Patriarch of Moscow (as it would seem to deny his legitimate holding of that title).

There was a strong movement within and after the Second Vatican Council
Second Vatican Council
The Second Vatican Council addressed relations between the Roman Catholic Church and the modern world. It was the twenty-first Ecumenical Council of the Catholic Church and the second to be held at St. Peter's Basilica in the Vatican. It opened under Pope John XXIII on 11 October 1962 and closed...
to elevate the late Josyf Slipyj, then metropolitan of Lviv
Lviv
Lviv is a city in western Ukraine. The city is regarded as one of the main cultural centres of today's Ukraine and historically has also been a major Polish and Jewish cultural center, as Poles and Jews were the two main ethnicities of the city until the outbreak of World War II and the following...
for the Ukrainians, to the status of patriarch. Many of his admirers use this title for Slipyj when referring to him historically and many in Ukraine use this title for the current major archbishop even today. However, Pope Paul VI specifically declined to grant this title and instead appointed Slipyj the first "major archbishop" of Lviv, thereby effectively creating this new title (the seat has since been moved to Kiev
Kiev
Kiev or Kyiv is the capital and the largest city of Ukraine, located in the north central part of the country on the Dnieper River. The population as of the 2001 census was 2,611,300. However, higher numbers have been cited in the press....
).