Landesbank
Landesbank
The Landesbanken in Germany are a group of state owned banks of a type unique to Germany. They are regionally organised and their business is predominantly wholesale banking...
Hessen-Thüringen (Helaba) is a commercial bank with core regions in Hesse
Hesse
Hesse or Hessia is both a cultural region of Germany and the name of an individual German state.* The cultural region of Hesse includes both the State of Hesse and the area known as Rhenish Hesse in the neighbouring Rhineland-Palatinate state...
and Thuringia
Thuringia
The Free State of Thuringia is a state of Germany, located in the central part of the country.It has an area of and 2.29 million inhabitants, making it the sixth smallest by area and the fifth smallest by population of Germany's sixteen states....
, Germany
Germany
Germany , officially the Federal Republic of Germany , is a federal parliamentary republic in Europe. The country consists of 16 states while the capital and largest city is Berlin. Germany covers an area of 357,021 km2 and has a largely temperate seasonal climate...
. It is the group bank for savings banks, Landesbank and public sector banks located in the two federal states and their municipalities, as well as a commercial bank with orientation to wholesale customer business. Helaba is an institution incorporated under public law. With approximately 6,000 employees, the Helaba Group is one of the larger German Landesbanks. Its two head offices are in Frankfurt
Frankfurt
Frankfurt am Main , commonly known simply as Frankfurt, is the largest city in the German state of Hesse and the fifth-largest city in Germany, with a 2010 population of 688,249. The urban area had an estimated population of 2,300,000 in 2010...
am Main and Erfurt
Erfurt
Erfurt is the capital city of Thuringia and the main city nearest to the geographical centre of Germany, located 100 km SW of Leipzig, 150 km N of Nuremberg and 180 km SE of Hannover. Erfurt Airport can be reached by plane via Munich. It lies in the southern part of the Thuringian...
. The bank has branches in Kassel (Landeskreditkasse zu Kassel), New York, London, Paris and Dublin and is also present with representative offices in Madrid, Moscow and Shanghai. Belonging to the Helaba Group are the subsidiaries, Helaba Invest Kapitalanlagegesellschaft, Frankfurter Bankgesellschaft and the OFB Group, which is active in real estate project development.

The business field “Wholesale customer business” comprises financial services for enterprises, banks and institutional investors. In the business field of “private customers and small and medium-sized enterprise (SMEs)”, through its S-Group Bank, Helaba provides services for the S-Group savings banks in Hesse and Thuringia. Since the acquisition of Frankfurter Sparkasse, the Helaba Group is the regional market leader in retail banking. At the same time, with 1822direkt, it has an online bank. In the framework of “public development and infrastructure business”, Helaba serves the development support programmes of the regional state of Hesse and participates in the development institutions and agencies in Hesse and Thuringia. With GWH, one of Hesse’s biggest housing corporations also belongs to the Helaba Group. 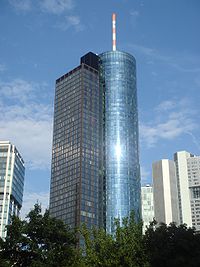 On June 1, 1953, Hessiche Landesbank Girozentrale arose from the merger of Hessische Landesbank Darmstadt Girozentrale (founded in 1940), Nassauische Landesbank Wiesbaden (founded in 1940) and Landeskreditkasse zu Kassel (founded in 1832). In the 1970s, a financial scandal brought Hessische Landesbank into serious difficulties. On July 1, 1992, a state treaty between Hesse and Thuringia on uniting the savings banks organizations of the two federal states brought about the creation of a joint Landesbank. As a result, it was the first Landesbank to operate outside a single federal state’s boundary. In the year 2005, Helaba acquired Frankfurter Sparkasse and thereby entered further into private customer business, which it had already conducted through its Darmstadt Branch and at its Kassel location through Landeskreditkasse zu Kassel.

The foundation stone of the Maintower
Maintower
Maintower is a 200 metre skyscraper in Frankfurt am Main, Germany. It is named after the river Main. A 40 metre communications tower is mounted atop the building. It features five underground floors, as well as two public viewing platforms. The tower currently remains the only skyscraper in...
was laid in October 1996. Three years later, the bank moved into the building. With a height of 200 metres, it is the fourth-highest skyscraper in Frankfurt. Earlier, the bank was headquartered in the adjacent building, now called Garden Towers.

In July 2011 it was reported that Helaba would pull out of the EU's bank stress tests to avoid public failure.

Board of Managing Directors


Former Chairmen of the Board of Managing Directors