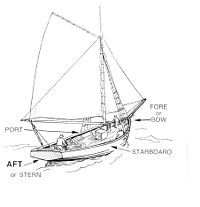 For the acronym, see AFT (disambiguation).

Aft, in naval
Navy
A navy is the branch of a nation's armed forces principally designated for naval and amphibious warfare; namely, lake- or ocean-borne combat operations and related functions...
terminology
Terminology
Terminology is the study of terms and their use. Terms are words and compound words that in specific contexts are given specific meanings, meanings that may deviate from the meaning the same words have in other contexts and in everyday language. The discipline Terminology studies among other...
, is an adjective
Adjective
In grammar, an adjective is a 'describing' word; the main syntactic role of which is to qualify a noun or noun phrase, giving more information about the object signified....
or adverb
Adverb
An adverb is a part of speech that modifies verbs or any part of speech other than a noun . Adverbs can modify verbs, adjectives , clauses, sentences, and other adverbs....
meaning, towards the stern
Stern
The stern is the rear or aft-most part of a ship or boat, technically defined as the area built up over the sternpost, extending upwards from the counter rail to the taffrail. The stern lies opposite of the bow, the foremost part of a ship. Originally, the term only referred to the aft port section...
(rear) of the ship
Ship
Since the end of the age of sail a ship has been any large buoyant marine vessel. Ships are generally distinguished from boats based on size and cargo or passenger capacity. Ships are used on lakes, seas, and rivers for a variety of activities, such as the transport of people or goods, fishing,...
, when the frame of reference
Frame of reference
A frame of reference in physics, may refer to a coordinate system or set of axes within which to measure the position, orientation, and other properties of objects in it, or it may refer to an observational reference frame tied to the state of motion of an observer.It may also refer to both an...
is within the ship. Example: "Able Seaman Smith; lay aft!". Or; "What's happening aft?"

Aft also describes the direction of movement within an aircraft
Aircraft
An aircraft is a vehicle that is able to fly by gaining support from the air, or, in general, the atmosphere of a planet. An aircraft counters the force of gravity by using either static lift or by using the dynamic lift of an airfoil, or in a few cases the downward thrust from jet engines.Although...
; that is, towards the tail. Example: "Let's go aft." It may also describe the back/tail location or region within an aircraft cabin. Example: "Aft lavatory."