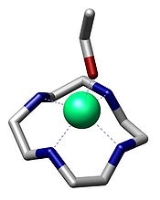 Encyclopedia
A macrocycle is, as defined by IUPAC, "a cyclic macromolecule
Macromolecule
A macromolecule is a very large molecule commonly created by some form of polymerization. In biochemistry, the term is applied to the four conventional biopolymers , as well as non-polymeric molecules with large molecular mass such as macrocycles...
or a macromolecular cyclic portion of a molecule." In the chemical literature, organic chemists may consider any molecule containing a ring of nine or more atoms to be a macrocycle. Coordination chemists generally define a macrocycle more narrowly as a cyclic molecule with three or more potential donor atoms that can coordinate to a metal center.

The macrocyclic effect was discovered in 1969. Coordination chemists study macrocycles with three or more potential donor atoms in rings of greater than nine atoms as these compounds often have strong and specific binding with metals. This property of coordinating macrocyclic molecules is the macrocycle effect. It is in essence a specific case of the chelation
Chelation
Chelation is the formation or presence of two or more separate coordinate bonds between apolydentate ligand and a single central atom....
effect: complexes of bidentate and polydentate ligand
Ligand
In coordination chemistry, a ligand is an ion or molecule that binds to a central metal atom to form a coordination complex. The bonding between metal and ligand generally involves formal donation of one or more of the ligand's electron pairs. The nature of metal-ligand bonding can range from...
s are more stable than those with unidentate ligands of similar strength (or similar donor atoms). A macrocycle has donor atoms arranged in more fixed positions and thus there is less of an entropic
Entropy
Entropy is a thermodynamic property that can be used to determine the energy available for useful work in a thermodynamic process, such as in energy conversion devices, engines, or machines. Such devices can only be driven by convertible energy, and have a theoretical maximum efficiency when...
effect in the binding energy
Binding energy
Binding energy is the mechanical energy required to disassemble a whole into separate parts. A bound system typically has a lower potential energy than its constituent parts; this is what keeps the system together—often this means that energy is released upon the creation of a bound state...
of macrocycles than monodentate or bidentate ligands with an equal number of donor atoms. Thus the macrocycle effect states that complexes of macrocyclic ligands are more stable than those with linear polydentate ligands of similar strength (or similar donor atoms). The same can be said for multicyclic macrocycles, or cryptates, being stronger complexing agents (a cryptate effect).

Macrocycles are generally synthesized from smaller, usually linear, molecules. To create a ring, either an intermolecular reaction, where two or more molecules come together in a reaction to form a ring, or an intramolecular
Intramolecular
Intramolecular in chemistry describes a process or characteristic limited within the structure of a single molecule, a property or phenomenon limited to the extent of a single molecule.- Examples :...
reaction, where one molecule reacts with itself to form a ring, must occur. Because the formation of macrocycles uses the same chemistry that polymerization
Polymerization
In polymer chemistry, polymerization is a process of reacting monomer molecules together in a chemical reaction to form three-dimensional networks or polymer chains...
does, steps need to be taken to prevent polymerization from occurring.
Traditionally, this involved high dilution chemistry where large amounts of solvent and low concentrations were used to prevent molecules from reacting with other molecules. Also, the reagents frequently needed to be added slowly. At low concentration, the molecule is more likely to react with itself than with another molecule. This is generally inefficient, using large quantities of solvents and giving low yields.

To achieve high yields of macrocycles at high concentrations, a way to orientate the reactive sites such that they readily undergo cyclization was needed. Transition metal
Transition metal
The term transition metal has two possible meanings:*The IUPAC definition states that a transition metal is "an element whose atom has an incomplete d sub-shell, or which can give rise to cations with an incomplete d sub-shell." Group 12 elements are not transition metals in this definition.*Some...
s, with their ability to gather & dispose of ligands in a given predictable geometry, can induce a “template effect.” By binding to the linear molecule, to influence its geometry, a metal "template" can accelerate either the intramolecular or the intermolecular reaction. Thus the judicious choice of a metal ion and the relative locations of donor atoms would allow a metal to control the cyclization process.

Macrocycles have been in use for several decades as synthetic dyes. Phthalocyanine
Phthalocyanine
Phthalocyanine is an intensely blue-green coloured macrocyclic compound that is widely used in dyeing. Phthalocyanines form coordination complexes with most elements of the periodic table...
is a porphyrin
Porphyrin
Porphyrins are a group of organic compounds, many naturally occurring. One of the best-known porphyrins is heme, the pigment in red blood cells; heme is a cofactor of the protein hemoglobin. Porphyrins are heterocyclic macrocycles composed of four modified pyrrole subunits interconnected at...
analogue, which is arguably the most useful, in uses as dyes and pigments since their discovery in 1928, due to their dark blue colour. There are however many other uses for them. Their name comes from their synthetic precursor, phthalodinitrile.