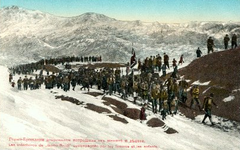 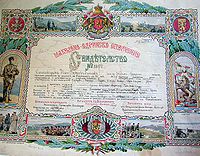 The Macedonian-Adrianopolitan Volunteer Corps was a volunteer corps
Corps
A corps is either a large formation, or an administrative grouping of troops within an armed force with a common function such as Artillery or Signals representing an arm of service...
of the Bulgarian Army during the Balkan Wars
Balkan Wars
The Balkan Wars were two conflicts that took place in the Balkans in south-eastern Europe in 1912 and 1913.By the early 20th century, Montenegro, Bulgaria, Greece and Serbia, the countries of the Balkan League, had achieved their independence from the Ottoman Empire, but large parts of their ethnic...
. It was formed on 23 September 1912 and consisted of Bulgarian
Bulgarians
The Bulgarians are a South Slavic nation and ethnic group native to Bulgaria and neighbouring regions. Emigration has resulted in immigrant communities in a number of other countries.-History and ethnogenesis:...
volunteers from Macedonia
Macedonia (region)
Macedonia is a geographical and historical region of the Balkan peninsula in southeastern Europe. Its boundaries have changed considerably over time, but nowadays the region is considered to include parts of five Balkan countries: Greece, the Republic of Macedonia, Bulgaria, Albania, Serbia, as...
and Thrace
Thrace
Thrace is a historical and geographic area in southeast Europe. As a geographical concept, Thrace designates a region bounded by the Balkan Mountains on the north, Rhodope Mountains and the Aegean Sea on the south, and by the Black Sea and the Sea of Marmara on the east...
, regions still under Ottoman rule
Ottoman Empire
The Ottoman EmpireIt was usually referred to as the "Ottoman Empire", the "Turkish Empire", the "Ottoman Caliphate" or more commonly "Turkey" by its contemporaries...
, and thus not subject to Bulgaria
Bulgaria
Bulgaria , officially the Republic of Bulgaria , is a parliamentary democracy within a unitary constitutional republic in Southeast Europe. The country borders Romania to the north, Serbia and Macedonia to the west, Greece and Turkey to the south, as well as the Black Sea to the east...
n military service
Military service
Military service, in its simplest sense, is service by an individual or group in an army or other militia, whether as a chosen job or as a result of an involuntary draft . Some nations require a specific amount of military service from every citizen...
.

The Commander of the Corps was Major General
Major General
Major general or major-general is a military rank used in many countries. It is derived from the older rank of sergeant major general. A major general is a high-ranking officer, normally subordinate to the rank of lieutenant general and senior to the ranks of brigadier and brigadier general...
Nikola Genev, Assistant Commander - Colonel
Colonel
Colonel , abbreviated Col or COL, is a military rank of a senior commissioned officer. It or a corresponding rank exists in most armies and in many air forces; the naval equivalent rank is generally "Captain". It is also used in some police forces and other paramilitary rank structures...
Aleksandar Protogerov
Aleksandar Protogerov
Alexandar Protogerov was a Bulgarian general, politician and revolutionary as well as a member of the revolutionary movement in Macedonia, Thrace and Pomoravlje. He was among the leaders of the Supreme Macedonian-Adrianople Committee and later joined the Internal Macedonian Revolutionary...
. Chief of Staff
Chief of Staff
The title, chief of staff, identifies the leader of a complex organization, institution, or body of persons and it also may identify a Principal Staff Officer , who is the coordinator of the supporting staff or a primary aide to an important individual, such as a president.In general, a chief of...
was Major
Major
Major is a rank of commissioned officer, with corresponding ranks existing in almost every military in the world.When used unhyphenated, in conjunction with no other indicator of rank, the term refers to the rank just senior to that of an Army captain and just below the rank of lieutenant colonel. ...
Petar Darvingov
Petar Darvingov
Petar Georgiev Darvingov or Peter Darvingov was a Bulgarian officer, revolutionary and military historian, corresponding member of Bulgarian Academy of Sciences from 1932.-Biography:...
. During the Second Balkan War
Second Balkan War
The Second Balkan War was a conflict which broke out when Bulgaria, dissatisfied with its share of the spoils of the First Balkan War, attacked its former allies, Serbia and Greece, on 29 June 1913. Bulgaria had a prewar agreement about the division of region of Macedonia...
Macedonian-Adrianopolitan Volunteer Corps took part in the battles against Serbian Army
Serbian Army
-Objectives:The Serbian Army is responsible for:* deterring armed threats* defending Serbia's territory* participation in peacekeeping operations* providing humanitarian aid and disaster relief-Personnel:...
. Besides Bulgarians, the corps also included volunteers from other nationalities, including a whole Armenia
Armenia
Armenia , officially the Republic of Armenia , is a landlocked mountainous country in the Caucasus region of Eurasia...
n company
Company (military unit)
A company is a military unit, typically consisting of 80–225 soldiers and usually commanded by a Captain, Major or Commandant. Most companies are formed of three to five platoons although the exact number may vary by country, unit type, and structure...
led by Garegin Nzhdeh and Andranik Toros Ozanian
Andranik Toros Ozanian
Andranik Ozanian , Andranik Toros Ozanian , General Andranik , also as Antranik or Antranig was an Armenian general, political and public activist and freedom fighter, greatly admired as a national hero.-Early Age:Antranik Toros Ozanian was born in the church...
.

Opalchenie Peak
Opalchenie Peak
Opalchenie Peak is the peak rising to 4500 m at the south extremity of Vinson Plateau, Sentinel Range in Ellsworth Mountains, Antarctica. It has precipitous and partly ice-free south slopes, and is of low prominence except to the south, where two parallel ridges descend steeply southwestwards...
in Vinson Massif
Vinson Massif
Vinson Massif is the highest mountain of Antarctica, lying in the Sentinel Range of the Ellsworth Mountains, which stand above the Ronne Ice Shelf near the base of the Antarctic Peninsula. The massif is located about from the South Pole and is about long and wide. At the highest point is Mount...
, Antarctica is named after the Bulgarian Volunteer Force in the 1877-1878 Russo-Turkish War and the Macedonian-Adrianople Volunteer Force in the 1912-1913 Balkan Wars.