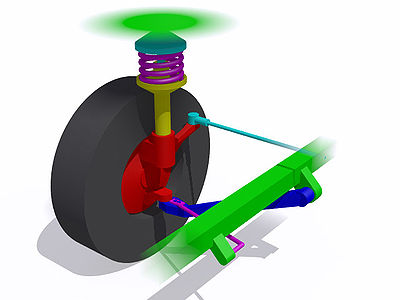 The MacPherson strut is a type of car
Automobile
An automobile, autocar, motor car or car is a wheeled motor vehicle used for transporting passengers, which also carries its own engine or motor...
suspension
Suspension (vehicle)
Suspension is the term given to the system of springs, shock absorbers and linkages that connects a vehicle to its wheels. Suspension systems serve a dual purpose — contributing to the car's roadholding/handling and braking for good active safety and driving pleasure, and keeping vehicle occupants...
system which uses the axis of a telescopic damper as the upper steering pivot. It is widely used in modern vehicles and named after Earle S. MacPherson
Earle S. MacPherson
Earle Steele MacPherson was an automotive engineer, most famous for developing the MacPherson strut in the 1940s.-Biography:Earle S. MacPherson was born in Highland Park, Illinois in 1891, and attended the University of Illinois...
, who developed the design.

Earle S. MacPherson
Earle S. MacPherson
Earle Steele MacPherson was an automotive engineer, most famous for developing the MacPherson strut in the 1940s.-Biography:Earle S. MacPherson was born in Highland Park, Illinois in 1891, and attended the University of Illinois...
developed the design of the strut in 1949 partially based on designs created by Guido Fornaca of FIAT
Fiat
FIAT, an acronym for Fabbrica Italiana Automobili Torino , is an Italian automobile manufacturer, engine manufacturer, financial, and industrial group based in Turin in the Italian region of Piedmont. Fiat was founded in 1899 by a group of investors including Giovanni Agnelli...
in the mid-1920s. It is possible the MacPherson was inspired by the suspension on the French Cottin-Desgouttes
Cottin & Desgouttes
Cottin & Desgouttes was a French automobile manufacturer from the beginning of the 20th century.- The Beginning :In 1904, Pierre Desgoutte started manufacturing automobiles under the name “Desgouttes & Cie”, in Lyon, France. The first model was the type A, powered by a 9.5-liter, 45 hp,...
that used the same design, but with leaf springs. Cottin-Desgouttes front suspension was in turn inspired by J. Walter Christie
J. Walter Christie
John Walter Christie was an American engineer and inventor. He is best known for developing the Christie suspension system used in a number of World War II-era tank designs, most notably the Soviet BT and T-34 series, and the British Covenanter and Crusader Cruiser tanks, as well as the Comet...
's 1904 design and he was inspired by plants.

The first car to feature MacPherson struts was the 1949 Ford Vedette
Ford Vedette
The Ford Vedette is a large car manufactured by Ford France SA in their factory in Poissy from 1948-1954. Introduced at the 1948 Mondial de l'Automobile in Paris, it was designed entirely in Detroit , but featured the Poissy-made 2158 cc Aquillon sidevalve V8 engine of Ford's Flathead engine...
, and it was also adopted in the 1951 Ford Consul
Ford Consul
The Ford Consul is a car manufactured by Ford in Britain.Between 1951 and 1962 the Consul was the four-cylinder base model of the three-model Ford Zephyr range, comprising Consul, Zephyr and Zephyr Zodiac...
and later Zephyr
Ford Zephyr
The Ford Zephyr was a car manufactured by the Ford Motor Company in the United Kingdom. Between 1950 and 1972, it was sold as a more powerful six-cylinder saloon to complement the four-cylinder Ford Consul: from 1962 the Zephyr itself was offered in both four- and six-cylinder versions.The Zephyr...
. MacPherson originally created the design for use at all four wheels (Mitsubishi Starion
Mitsubishi Starion
The Mitsubishi Starion is a two-door, turbocharged four-cylinder rear-wheel drive four-seat sports car that was in production from 1982 to 1989. It was also marketed in North America as the Conquest under the Chrysler, Dodge, and Plymouth names; both the Starion and Conquest came to an end in 1989...
, for example), but production applications used it only for the front suspension, where it provides a steering
Steering
Steering is the term applied to the collection of components, linkages, etc. which will allow a vessel or vehicle to follow the desired course...
pivot (kingpin) as well as a suspension mounting for the wheel.

MacPherson struts consist of a wishbone or a substantial compression link stabilized by a secondary link which provides a bottom mounting point for the hub or axle
Axle
An axle is a central shaft for a rotating wheel or gear. On wheeled vehicles, the axle may be fixed to the wheels, rotating with them, or fixed to its surroundings, with the wheels rotating around the axle. In the former case, bearings or bushings are provided at the mounting points where the axle...
of the wheel. This lower arm system provides both lateral and longitudinal location of the wheel. The upper part of the hub is rigidly fixed to the inner part of the strut proper, the outer part of which extends upwards directly to a mounting in the body shell of the vehicle.

To be really successful, the MacPherson strut required the introduction of unibody (or monocoque
Monocoque
Monocoque is a construction technique that supports structural load by using an object's external skin, as opposed to using an internal frame or truss that is then covered with a non-load-bearing skin or coachwork...
) construction, because it needs a substantial vertical space and a strong top mount, which unibodies can provide, while benefiting them by distributing stresses. The strut will usually carry both the coil spring
Spring (device)
A spring is an elastic object used to store mechanical energy. Springs are usually made out of spring steel. Small springs can be wound from pre-hardened stock, while larger ones are made from annealed steel and hardened after fabrication...
on which the body is suspended and the shock absorber
Shock absorber
A shock absorber is a mechanical device designed to smooth out or damp shock impulse, and dissipate kinetic energy. It is a type of dashpot.-Nomenclature:...
, which is usually in the form of a cartridge mounted within the strut (see coilover
Coilover
A coilover is an automobile suspension device. "Coilover" is short for "coil spring over strut". It consists of a shock absorber with a coil spring encircling it. The shock absorber and spring are assembled as a unit prior to installation, and are replaced as a unit when the shock absorber has...
). The strut also usually has a steering
Steering
Steering is the term applied to the collection of components, linkages, etc. which will allow a vessel or vehicle to follow the desired course...
arm built into the lower inner portion. The whole assembly is very simple and can be preassembled into a unit; also by eliminating the upper control arm, it allows for more width in the engine bay, which is useful for smaller cars, particularly with transverse
Transverse engine
A transverse engine is an engine mounted in a vehicle so that the engine's crankshaft axis is perpendicular to the long axis of the vehicle. Many modern front wheel drive vehicles use this engine mounting configuration...
-mounted engines such as most front wheel drive vehicles have. It can be further simplified, if needed, by substituting an anti-roll bar (torsion bar) for the radius arm
Radius rod
A radius rod is a suspension member intended to control wheel motion in the longitudinal plane. The link is connected on one end to the wheel carrier or axle, on the other to the chassis or unibody of the vehicle.Radius rods typically are mounted ahead of the wheel...
. For those reasons, it has become almost ubiquitous with low cost manufacturers. Furthermore, it offers an easy method to set suspension geometry.

Although it is a popular choice due to its simplicity and low manufacturing cost, the design has a few disadvantages with regards to the quality of ride provided and how it affects the handling of the car. Geometric analysis shows it cannot allow vertical movement of the wheel without some degree of either camber angle
Camber angle
thumb|100px|From the front of the car, a right wheel with a negative camber angleCamber angle is the angle made by the wheels of a vehicle; specifically, it is the angle between the vertical axis of the wheels used for steering and the vertical axis of the vehicle when viewed from the front or...
change, sideways movement, or both. It is not generally considered to give as good handling as a double wishbone suspension
Double wishbone suspension
In automobiles, a double wishbone suspension is an independent suspension design using two wishbone-shaped arms to locate the wheel. Each wishbone or arm has two mounting points to the chassis and one joint at the knuckle. The shock absorber and coil spring mount to the wishbones to control...
, because it allows the engineers less freedom to choose camber change and roll center. Another drawback is that it tends to transmit noise and vibration from the road directly into the body shell, giving higher noise levels and a "harsh" feeling to the ride compared with double wishbones, requiring manufacturers to add extra noise reduction or cancellation and isolation mechanisms. Also, because of its greater size and robustness and greater degree of attachment to the vehicle structure, when the internal seals of the shock absorber portion wear out replacement is expensive compared to replacing a simple shock absorber.

Despite these drawbacks, the MacPherson strut setup is still used on high performance cars such as the Porsche 911
Porsche 911
The Porsche 911 is a luxury 2-door sports coupe made by Porsche AG of Stuttgart, Germany. It has a distinctive design, rear-engined and with independent rear suspension, an evolution of the swing axle on the Porsche 356. The engine was also air-cooled until the introduction of the Type 996 in 1998...
, several Mercedes-Benz
Mercedes-Benz
Mercedes-Benz is a German manufacturer of automobiles, buses, coaches, and trucks. Mercedes-Benz is a division of its parent company, Daimler AG...
models and nearly all current BMW
BMW
Bayerische Motoren Werke AG is a German automobile, motorcycle and engine manufacturing company founded in 1916. It also owns and produces the Mini marque, and is the parent company of Rolls-Royce Motor Cars. BMW produces motorcycles under BMW Motorrad and Husqvarna brands...
s (including the new Mini) excluding the 2007 X5, 2009 7-series, 2011 5-series and 5-series GT,.

The Porsche 911 up until the 1989 model year (964) use Macpherson strut designs that do not have coil springs, using a torsion bar suspension instead.