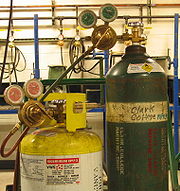 MAPP gas is a trademarked name belonging to Linde Group
The Linde Group
The Linde Group, registered as Linde AG is an international industrial gases and engineering company founded in Germany in 1879. Linde shares are traded on all the German stock exchanges and also in Zürich, and the Linde share price is included in the DAX 30 index...
, previously to Dow
Dow Chemical Company
The Dow Chemical Company is a multinational corporation headquartered in Midland, Michigan, United States. As of 2007, it is the second largest chemical manufacturer in the world by revenue and as of February 2009, the third-largest chemical company in the world by market capitalization .Dow...
, for a fuel gas
Fuel gas
Fuel gas can refer to any of several gases burned to produce thermal energy.Natural gas is the most common fuel gas, but others include:* Coal gas or Town gas* Syngas* Mond gas* Propane* Butane* Regasified liquified petroleum gas* Wood gas...
based on a stabilized mixture of methylacetylene
Methylacetylene
Methylacetylene is an alkyne with the chemical formula H3C≡CH. It is a component of MAPP gas along with its isomer 1,2-propadiene , which is commonly used in gas welding...
(propyne) and propadiene
Propadiene
Propadiene is the organic compound with the formula H2C=C=CH2. It is the simplest allene, a compound with conjoined C=C double bonds. Propadiene's common name is allene...
. The name comes from the original chemical composition: methylacetylene-propadiene propane. MAPP gas is also widely used as a generic name for UN 1060
UN number
UN numbers or UN IDs are four-digit numbers that identify hazardous substances, and articles in the framework of international transport....
stabilised methylacetylene-propadiene (unstabilised methylacetylene-propadiene is known as MAPD). MAPP gas is widely regarded as a safer and easier-to-use substitute for acetylene
Acetylene
Acetylene is the chemical compound with the formula C2H2. It is a hydrocarbon and the simplest alkyne. This colorless gas is widely used as a fuel and a chemical building block. It is unstable in pure form and thus is usually handled as a solution.As an alkyne, acetylene is unsaturated because...
. In the spring of 2008, true MAPP gas production ended when production was discontinued at the only plant making it. Current products labeled ""MAPP" are in fact MAPP substitutes. These versions are stabilized liquefied petroleum gas (LPG) with high levels of propylene
Propylene
Propene, also known as propylene or methylethylene, is an unsaturated organic compound having the chemical formula C3H6. It has one double bond, and is the second simplest member of the alkene class of hydrocarbons, and it is also second in natural abundance.-Properties:At room temperature and...
.

MAPP gas can be used in combination with oxygen
Oxygen
Oxygen is the element with atomic number 8 and represented by the symbol O. Its name derives from the Greek roots ὀξύς and -γενής , because at the time of naming, it was mistakenly thought that all acids required oxygen in their composition...
for heating, soldering
Soldering
Soldering is a process in which two or more metal items are joined together by melting and flowing a filler metal into the joint, the filler metal having a lower melting point than the workpiece...
, brazing
Brazing
Brazing is a metal-joining process whereby a filler metal is heated above and distributed between two or more close-fitting parts by capillary action. The filler metal is brought slightly above its melting temperature while protected by a suitable atmosphere, usually a flux...
and even welding
Welding
Welding is a fabrication or sculptural process that joins materials, usually metals or thermoplastics, by causing coalescence. This is often done by melting the workpieces and adding a filler material to form a pool of molten material that cools to become a strong joint, with pressure sometimes...
due to its high flame temperature
Adiabatic flame temperature
In the study of combustion, there are two types of adiabatic flame temperature depending on how the process is completed, constant volume and constant pressure, describing the temperature the combustion products theoretically reach if no energy is lost to the outside environment.The constant volume...
of 2927 °C (5300 °F) in oxygen. Although acetylene has a higher flame temperature (3160 °C, 5720 °F), MAPP has the advantage that it requires neither dilution nor special container fillers during transport, allowing a greater volume of fuel gas to be transported at the same given weight, and it is much safer in use.

The MAPP/oxygen flame is not entirely appropriate for welding steel
Steel
Steel is an alloy that consists mostly of iron and has a carbon content between 0.2% and 2.1% by weight, depending on the grade. Carbon is the most common alloying material for iron, but various other alloying elements are used, such as manganese, chromium, vanadium, and tungsten...
, due to the high concentration of hydrogen
Hydrogen
Hydrogen is the chemical element with atomic number 1. It is represented by the symbol H. With an average atomic weight of , hydrogen is the lightest and most abundant chemical element, constituting roughly 75% of the Universe's chemical elemental mass. Stars in the main sequence are mainly...
in the flame - higher than acetylene, but lower than any of the other petroleum fuel gases. The hydrogen infuses into the molten steel and renders the welds brittle
Hydrogen embrittlement
Hydrogen embrittlement is the process by which various metals, most importantly high-strength steel, become brittle and fracture following exposure to hydrogen...
. For small-scale welding with MAPP this is not too serious a problem as the hydrogen escapes readily, and MAPP/oxygen can in practice be used for welding small steel parts.

MAPP/oxygen was advantageously used in underwater cutting, which requires high gas pressures (under such pressures acetylene polymerizes
Chemical reaction
A chemical reaction is a process that leads to the transformation of one set of chemical substances to another. Chemical reactions can be either spontaneous, requiring no input of energy, or non-spontaneous, typically following the input of some type of energy, such as heat, light or electricity...
explosively, making it dangerous to use). However, underwater oxy/fuel gas cutting of any kind has been replaced by exothermic cutting due to the much faster cut rate and greater safety.

MAPP gas is also used in combustion with air for brazing and soldering, where it has considerable advantages over competing propane
Propane
Propane is a three-carbon alkane with the molecular formula , normally a gas, but compressible to a transportable liquid. A by-product of natural gas processing and petroleum refining, it is commonly used as a fuel for engines, oxy-gas torches, barbecues, portable stoves, and residential central...
fuel due to its high combustion temperature of 2,020 °C (3,670 °F).

The biggest disadvantage of MAPP gas is cost; it is typically one-and-a-half times as expensive as propane at the refinery, and up to four times as expensive to the consumer. It is no longer used much in any large-scale industry - for larger scale users acetylene/oxygen is more economic than MAPP/oxygen when high flame temperatures are needed, and propane/air is more economic when big overall heats are needed.

However, for the small-scale user the MAPP/oxygen flame is still highly desirable, having higher flame temperatures and energy densities than any flame other than acetylene/oxygen, but without the dangers and inconveniences of acetylene/oxygen. Jewellers, glassbead makers, and many others find it very useful. Plumbers, refrigeration and HVAC engineers, and other tradesmen also value the high heat capacity of the MAPP/air flame; MAPP was until recently widely used, supplied in small to medium size containers.

On , the Petromont Varennes plant closed its methylacetylene/propadiene plant. They were the only North American plant making MAPP gas, and the only legal supplier of trademarked MAPP gas in the world. This caused a widescale shortage, and many substitutes were introduced by the companies who had repackaged the Dow and Varennes product(s). Most of these substitutes were propylene, like MAP//Pro
from BernzOmatic
BernzOmatic
BernzOmatic is an American manufacturing company that was founded by Otto Bernz in 1876. The company manufactures handheld torches and accessories, especially gas burner torches use fuel cylinders containing butane, propane, MAPP gas, and oxygen for soldering, brazing, and welding. Its trademark...
. Some were mixtures with higher hydrocarbons or with other ingredients like acetone. Many of these work acceptably in gas/air torches, but none work as well as MAPP in gas/oxygen torches.

MAPP is colorless in both liquid and gas form. The gas has a pronounced garlic
Garlic
Allium sativum, commonly known as garlic, is a species in the onion genus, Allium. Its close relatives include the onion, shallot, leek, chive, and rakkyo. Dating back over 6,000 years, garlic is native to central Asia, and has long been a staple in the Mediterranean region, as well as a frequent...
or fishy odor at concentrations above 100 ppm, due to the addition of mercaptans for safety, as for the natural gas commonly used for cooking. MAPP gas is toxic if inhaled at high concentrations.

The composition of the supplied gas has varied widely, with the gases as supplied by different repackagers/resellers at any one time varying, as well as the general composition varying over time, but a typical composition for an early Dow gas might be: methylacetylene (propyne) 48%, propadiene 23%, propane 27%. For a later Dow/Petromont gas propyne 30%, propadiene 14%, propylene 43%, propane 7%, C4H10 (isobutane, butane) 6% might be more typical.