The weapon can fire guided and unguided projectiles up to 42 km (26.1 mi). Firing ballistic missiles, (such as the U.S. Army Tactical Missile System
Army Tactical Missile System
The MGM-140 Army Tactical Missile System is a surface-to-surface missile , range over 100 miles, with solid propellant, 13 feet height and 24 inches diameter, manufactured by Lockheed Martin...
—ATACMS), it can hit targets 300 km (186.4 mi) away; the warhead in such shots reaches an altitude of about 50 km (164,000 ft). The M270 can be used in shoot-and-scoot
Shoot-and-scoot
The term shoot and scoot refers to an artillery tactic of firing at a target and then immediately moving away from the location where the shots were fired. The reason for this is to avoid counter-battery fire - fired by enemy artillery or delivered by attack aircraft and helicopters, in order to...
tactics, firing its rockets rapidly, then moving away to avoid counter-battery fire
Counter-battery fire
Counter-battery fire is a type of mission assigned to military artillery forces, which are given the task of locating and firing upon enemy artillery.-Background:...
.

MLRS was developed jointly by the United Kingdom, United States, Germany, and France. It was developed from the older General Support Rocket System (GSRS). The M270 MLRS weapons system is collectively known as the M270 MLRS Self-propelled Loader/Launcher (SPLL). The SPLL is composed of 3 primary subsystems: the M269 Loader Launcher Module (LLM), which also houses the electronic Fire Control System, is mated to the M993 Carrier Vehicle. The M993 is a derivative of the Bradley Fighting Vehicle chassis.

The rockets and ATACMS missiles are contained in interchangeable pods. Each pod contains six standard rockets or one guided ATACMS missile; the two types cannot be mixed. The LLM can hold two pods at a time, which are hand-loaded using an integrated winch system. All twelve rockets or two ATACMS missiles can be fired in under a minute. One launcher firing twelve rockets can completely blanket one square kilometer with submunition
Cluster bomb
A cluster munition is a form of air-dropped or ground-launched explosive weapon that releases or ejects smaller sub-munitions. Commonly, this is a cluster bomb that ejects explosive bomblets that are designed to kill enemy personnel and destroy vehicles...
s. For this reason, the MLRS is sometimes referred to as the "Grid Square Removal Service" (metric
Metric system
The metric system is an international decimalised system of measurement. France was first to adopt a metric system, in 1799, and a metric system is now the official system of measurement, used in almost every country in the world...
maps are usually divided up into 1 km grids). The U.S. Army is currently working on developing and fielding unitary (one large warhead instead of submunitions) rocket and ATACMS variants, as well as a guided rocket.

In 2006, MLRS was upgraded to fire guided rounds. Phase I testing of a guided unitary round (XM31) was completed on an accelerated schedule in March 2006. Due to an Urgent Need Statement the guided unitary round has already been fielded and used in action in Iraq. Lockheed Martin
Lockheed Martin
Lockheed Martin is an American global aerospace, defense, security, and advanced technology company with worldwide interests. It was formed by the merger of Lockheed Corporation with Martin Marietta in March 1995. It is headquartered in Bethesda, Maryland, in the Washington Metropolitan Area....
also received a contract to convert existing M30 DPICM GMLRS rockets to the XM31 unitary variant. 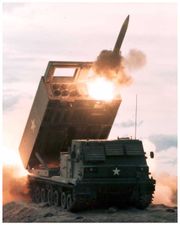 C Btry 1/27th FA was the first ground unit to fire in support of Operation Desert Storm, firing a missile at approximately 00:40 (12:40am) In early Feb 91 1/27th FA launched the biggest MLRS night fire mission in history. It has since been used in numerous military engagements including the 2003 invasion of Iraq
2003 invasion of Iraq
The 2003 invasion of Iraq , was the start of the conflict known as the Iraq War, or Operation Iraqi Freedom, in which a combined force of troops from the United States, the United Kingdom, Australia and Poland invaded Iraq and toppled the regime of Saddam Hussein in 21 days of major combat operations...
. In March 2007 the British Ministry of Defence decided to send a troop
Troop
A troop is a military unit, originally a small force of cavalry, subordinate to a squadron and headed by the troop leader. In many armies a troop is the equivalent unit to the infantry section or platoon...
of MLRS to support ongoing operations in Afghanistan's southern province of Helmand; they will use newly developed guided munitions.

In 04/2011 the first modernized MLRS II and M31 GMLRS rocket were handed over to the German Army's Artillery School in Idar Oberstein. The German Army operates the M31 rocket up to a range of 90km.

The M270 system can fire MFOM, MLRS Family Of Munition rockets and artillery missiles, which are manufactured and used by a number of countries. These include:

Egyptian Army
Egyptian Army
The Egyptian Army is the largest service branch within the Egyptian Armed Forces and holds power in the current Egyptian government. It is estimated to number around 379,000, in addition to 479,000 reservists for a total of 858,000 strong. The modern army was created in the 1820s, and during the...
(48): Finnish Army
Finnish Army
The Finnish Army is the land forces branch of the Finnish Defence Forces.Today's Army is divided into six branches: the infantry , field artillery, anti-aircraft artillery, engineers, signals, and materiel troops.-History of the Finnish Army:Between 1809 and 1917 Finland was an autonomous part of...
(22, called 298 RsRakH 06): French Army
French Army
The French Army, officially the Armée de Terre , is the land-based and largest component of the French Armed Forces.As of 2010, the army employs 123,100 regulars, 18,350 part-time reservists and 7,700 Legionnaires. All soldiers are professionals, following the suspension of conscription, voted in...
(44): German Army
German Army
The German Army is the land component of the armed forces of the Federal Republic of Germany. Following the disbanding of the Wehrmacht after World War II, it was re-established in 1955 as the Bundesheer, part of the newly formed West German Bundeswehr along with the Navy and the Air Force...
(called MARS Mittleres Artillerie Raketen System) (50+202): Hellenic Army
Hellenic Army
The Hellenic Army , formed in 1828, is the land force of Greece.The motto of the Hellenic Army is , "Freedom Stems from Valor", from Thucydides's History of the Peloponnesian War...
(36): Israel Defense Forces
Israel Defense Forces
The Israel Defense Forces , commonly known in Israel by the Hebrew acronym Tzahal , are the military forces of the State of Israel. They consist of the ground forces, air force and navy. It is the sole military wing of the Israeli security forces, and has no civilian jurisdiction within Israel...
(48)(called "Menatetz" מנתץ): Italian Army
Italian Army
The Italian Army is the ground defence force of the Italian Armed Forces. It is all-volunteer force of active-duty personnel, numbering 108,355 in 2010. Its best-known combat vehicles are the Dardo infantry fighting vehicle, the Centauro tank destroyer and the Ariete tank, and among its aircraft...
(22): Japan Ground Self-Defense Force
Japan Ground Self-Defense Force
The , or JGSDF, is the army of Japan. The largest of the three services of the Japan Self-Defense Forces, the Ground Self-Defense Force operates under the command of the chief of the ground staff, based in the city of Ichigaya, Tokyo. The present chief of ground staff is General Yoshifumi Hibako...
(99): Royal Netherlands Army
Royal Netherlands Army
The Royal Netherlands Army is the land forces element of the military of the Netherlands.-Short history:The Royal Netherlands Army was raised on 9 January 1814, but its origins date back to 1572, when the so-called Staatse Leger was raised...
(no longer in service; sold to Finnish Army) (22): Norwegian Army
Norwegian Army
Norway achieved full independence in 1905, and in the first century of its short life has contributed to two major conflicts, the Cold War and the War on Terror. The Norwegian Army currently operates in the north of Norway and in Afghanistan as well as in Eastern Europe. The Army is the oldest of...
(12) (no longer in active service): Republic of Korea Army
Republic of Korea Army
The Republic of Korea Army is the largest of the military branches of the South Korean armed forces with 520,000 members as of 2010...
(58): Turkish Army
Turkish Army
The Turkish Army or Turkish Land Forces is the main branch of the Turkish Armed Forces responsible for land-based military operations. The modern history of the army began with its formation after the collapse of the Ottoman Empire...
(12): Royal Artillery
Royal Artillery
The Royal Regiment of Artillery, commonly referred to as the Royal Artillery , is the artillery arm of the British Army. Despite its name, it comprises a number of regiments.-History:...
(67): United States Army
United States Army
The United States Army is the main branch of the United States Armed Forces responsible for land-based military operations. It is the largest and oldest established branch of the U.S. military, and is one of seven U.S. uniformed services...
(840+151)

US military operators refer to the M270 as "the commander's personal shotgun" or as "battlefield buckshot." It is also commonly referred to as the "Gypsy Wagon", because crews store additional equipment such as camouflage netting, cots, coolers, and personal items on top of the vehicle as the launcher itself lacks adequate storage space for the crew. Within the British military a common nickname is "Grid Square Removal System", a play on the initialism GSRS (from the older General Support Rocket System). With the adoption of the new M30 GPS guided rocket it is now being referred to as the "70 kilometer sniper rifle." During the 1991 Gulf War, the Iraqis referred to the small M77 submunitions rockets as the "Steel Rain."