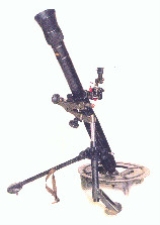 Encyclopedia
The M252 81 mm medium weight mortar
Mortar (weapon)
A mortar is an indirect fire weapon that fires explosive projectiles known as bombs at low velocities, short ranges, and high-arcing ballistic trajectories. It is typically muzzle-loading and has a barrel length less than 15 times its caliber....
is an American
United States
The United States of America is a federal constitutional republic comprising fifty states and a federal district...
smooth bore
Smoothbore
A smoothbore weapon is one which has a barrel without rifling. Smoothbores range from handheld firearms to powerful tank guns and large artillery mortars.-History of firearms and rifling:...
, muzzle-loading
Muzzleloader
A muzzleloader is any firearm into which the projectile and usually the propellant charge is loaded from the muzzle of the gun . This is distinct from the more popular modern designs of breech-loading firearms...
, high-angle-of-fire weapon
Weapon
A weapon, arm, or armament is a tool or instrument used with the aim of causing damage or harm to living beings or artificial structures or systems...
used for long-range indirect
Indirect fire
Indirect fire means aiming and firing a projectile in a high trajectory without relying on a direct line of sight between the gun and its target, as in the case of direct fire...
fire support
Fire support
Fire support is long-range firepower provided to a front-line military unit. Typically, fire support is provided by artillery or close air support , and is used to shape the battlefield or, more optimistically, define the battle...
to light infantry
Light infantry
Traditionally light infantry were soldiers whose job was to provide a skirmishing screen ahead of the main body of infantry, harassing and delaying the enemy advance. Light infantry was distinct from medium, heavy or line infantry. Heavy infantry were dedicated primarily to fighting in tight...
, air assault
Air assault
Air assault is the movement of ground-based military forces by vertical take-off and landing aircraft—such as the helicopter—to seize and hold key terrain which has not been fully secured, and to directly engage enemy forces...
, and airborne
Airborne forces
Airborne forces are military units, usually light infantry, set up to be moved by aircraft and 'dropped' into battle. Thus they can be placed behind enemy lines, and have an ability to deploy almost anywhere with little warning...
units across the entire front of a battalion
Battalion
A battalion is a military unit of around 300–1,200 soldiers usually consisting of between two and seven companies and typically commanded by either a Lieutenant Colonel or a Colonel...
zone of influence. In the U.S. Army
United States Army
The United States Army is the main branch of the United States Armed Forces responsible for land-based military operations. It is the largest and oldest established branch of the U.S. military, and is one of seven U.S. uniformed services...
and U.S. Marine Corps
United States Marine Corps
The United States Marine Corps is a branch of the United States Armed Forces responsible for providing power projection from the sea, using the mobility of the United States Navy to deliver combined-arms task forces rapidly. It is one of seven uniformed services of the United States...
, it is normally deployed in the mortar platoon
Platoon
A platoon is a military unit typically composed of two to four sections or squads and containing 16 to 50 soldiers. Platoons are organized into a company, which typically consists of three, four or five platoons. A platoon is typically the smallest military unit led by a commissioned officer—the...
of an infantry
Infantry
Infantrymen are soldiers who are specifically trained for the role of fighting on foot to engage the enemy face to face and have historically borne the brunt of the casualties of combat in wars. As the oldest branch of combat arms, they are the backbone of armies...
battalion
Battalion
A battalion is a military unit of around 300–1,200 soldiers usually consisting of between two and seven companies and typically commanded by either a Lieutenant Colonel or a Colonel...
.

The M252 is an adaptation of the British 81mm L16A2 mortar
L16 81mm Mortar
The United Kingdom's L16 81 mm mortar is the standard mortar used by the British armed forces. It originated as a joint design by UK and Canada. The version produced and used by Australia is named the F2 81mm Mortar, whilst the version used by the U.S...
developed in the 1950s. It entered service with the U.S. Army and replaced the previous 81 mm M29 mortar
M29 Mortar
The M29 is a United States produced 81 millimeter calibre mortar. It began replacing the M1 Mortar in U.S. service in 1952 being lighter and with greater range. It was replaced by the M252 Mortar in 1984...
in 1986. It was adopted due to the extended range (from 4,500 meters
Metre
The metre , symbol m, is the base unit of length in the International System of Units . Originally intended to be one ten-millionth of the distance from the Earth's equator to the North Pole , its definition has been periodically refined to reflect growing knowledge of metrology...
to 5,650 meters) and enhanced lethality In the U.S. it is produced by Watervliet Arsenal
Watervliet Arsenal
The Watervliet Arsenal is an arsenal of the United States Army located in Watervliet, New York, on the west bank of the Hudson River. It is the oldest continuously active arsenal in the United States, and today produces much of the artillery for the army, as well as gun tubes for cannons, mortars,...
.

A much lighter version, the M252A1 was fielded for the first time in 2011. By reducing the number of parts and using lightweight materials, the total weight was reduced by 20.8 pounds. In the next several years, all U.S. Army M252s will be replaced by the M252A1. As part of the same program, a lighweight version of the M224 mortar
M224 Mortar
The M224 60 mm Lightweight Mortar is a smooth bore, muzzle-loading, high-angle-of-fire weapon used for close-in support of ground troops.-Description:The M224 system is composed of the*M225 Cannon *M170 Bipod...
was developed. 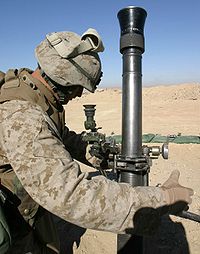 While the M252 does fire a weapon specific series of ammunition, it can also fire rounds from the M29 Mortar
M29 Mortar
The M29 is a United States produced 81 millimeter calibre mortar. It began replacing the M1 Mortar in U.S. service in 1952 being lighter and with greater range. It was replaced by the M252 Mortar in 1984...
(only at charge 3 or below though). The M252 Mortar can fire the following principal classifications of training and service ammunition
Ammunition
Ammunition is a generic term derived from the French language la munition which embraced all material used for war , but which in time came to refer specifically to gunpowder and artillery. The collective term for all types of ammunition is munitions...
.

The range of mortars are controlled by what are referred to as "charges." Charges are semi-circular nitrocellulose donuts that resemble a puffy letter "C." Ammunition for the M252 mortar come with four charges. Longer range shots require more propellant than can be easily stored in the tail of the round, hence the necessity of the charges to be placed on the round. Once a target is ranged, the correct charge is placed on the round by removing the charges from the projectile. Once the charges are verified by the section leader, the round is dropped down the muzzle of the tube. The round, pulled by gravity, accelerates down the smooth bore of the mortar until the primer (in the base of the tail boom of the round) strikes the firing pin located in the bottom of the mortar tube. The primer detonates igniting the charge in the tail fin which in turn ignites any of the C-charges on the round. The expanding gas created by the burning charges push against the obturator band on the round, sealing the gasses and gives the round forward momentum. The round is accelerated by the gasses until it leaves the end of the tube.