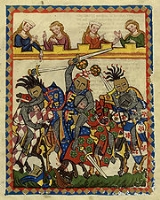 Melee (icon, French: mêlée mɛle, the French spelling is also quite frequent in English writing), generally refers to disorganized close combat
Close combat
*Close combat is a generic term for both Close Quarters Battle and Hand to hand combat.*Mêlée generally refers to disorganized close combat.*CQB is an acronym for Close Quarters Battle, such as that which occurs in urban warfare....
involving a group of fighters. A melee ensues when groups become locked together in combat with no regard to group tactics or fighting as an organized unit; each participant fights as an individual.


Origin of the term

The French term is the feminine past participle of the verb "to mix". Nominalized, it refers to any confused tangle or agitated scramble, in particular unordered combat. The term descends from Old French
Old French
Old French was the Romance dialect continuum spoken in territories that span roughly the northern half of modern France and parts of modern Belgium and Switzerland from the 9th century to the 14th century...
meslede, from Vulgar Latin
Vulgar Latin
Vulgar Latin is any of the nonstandard forms of Latin from which the Romance languages developed. Because of its nonstandard nature, it had no official orthography. All written works used Classical Latin, with very few exceptions...
misculāta "mixed", from Latin
Latin
Latin is an Italic language originally spoken in Latium and Ancient Rome. It, along with most European languages, is a descendant of the ancient Proto-Indo-European language. Although it is considered a dead language, a number of scholars and members of the Christian clergy speak it fluently, and...
miscēre "to mix"; compare mélange
Mélange
In geology, a mélange is a large-scale breccia, a mappable body of rock characterized by a lack of continuous bedding and the inclusion of fragments of rock of all sizes, contained in a fine-grained deformed matrix. The mélange typically consists of a jumble of large blocks of varied lithologies...
, milieu
Milieu
Milieu is the word for environment in French, and, for hundreds of years, also in Dutch, Swedish, English, and other languages that were strongly influenced by French culture and French language, primarily during the 17th and 18th centuries....
.

Like other common foreign-derived terms used in English, the word is sometimes written without accents (i.e. as "melee").

During the Middle Ages
Middle Ages
The Middle Ages is a periodization of European history from the 5th century to the 15th century. The Middle Ages follows the fall of the Western Roman Empire in 476 and precedes the Early Modern Era. It is the middle period of a three-period division of Western history: Classic, Medieval and Modern...
, tournaments
Tournament (medieval)
A tournament, or tourney is the name popularly given to chivalrous competitions or mock fights of the Middle Ages and Renaissance . It is one of various types of hastiludes....
often contained a mêlée consisting of knights fighting one another on foot or while mounted, either divided into two sides or fighting as a free-for-all. The object was to capture opposing knights so that they could be ransomed, and this could be a very profitable business for such skilled knights as William Marshal
William Marshal, 1st Earl of Pembroke
Sir William Marshal, 1st Earl of Pembroke , also called William the Marshal , was an Anglo-Norman soldier and statesman. He was described as the "greatest knight that ever lived" by Stephen Langton...
. There was a tournament ground covering several square miles in northern France
France
The French Republic , The French Republic , The French Republic , (commonly known as France , is a unitary semi-presidential republic in Western Europe with several overseas territories and islands located on other continents and in the Indian, Pacific, and Atlantic oceans. Metropolitan France...
to which knights came from all over Europe to prove themselves in quite real combat. This was, in fact, the original form of tournaments and the most popular between the twelfth and thirteenth centuries—jousting
Jousting
Jousting is a martial game or hastilude between two knights mounted on horses and using lances, often as part of a tournament.Jousting emerged in the High Middle Ages based on the military use of the lance by heavy cavalry. The first camels tournament was staged in 1066, but jousting itself did not...
being a later development, and one that did not completely displace the mêlée until many more centuries had passed. The original mêlée was engaged with normal weapons and fought with as much danger as a normal battle. Rules slowly tempered the danger, but at all times the mêlée was more dangerous than the joust.

The term "melee" has been extended to refer to other forms of combat, such as a naval
Warship
A warship is a ship that is built and primarily intended for combat. Warships are usually built in a completely different way from merchant ships. As well as being armed, warships are designed to withstand damage and are usually faster and more maneuvrable than merchant ships...
or armor
Armoured fighting vehicle
An armoured fighting vehicle is a combat vehicle, protected by strong armour and armed with weapons. AFVs can be wheeled or tracked....
battle that is fought at abnormally close range with little central control once it starts. The Battle of Trafalgar
Battle of Trafalgar
The Battle of Trafalgar was a sea battle fought between the British Royal Navy and the combined fleets of the French Navy and Spanish Navy, during the War of the Third Coalition of the Napoleonic Wars ....
became a melee when the British ships broke the French and Spanish line, precipitating a ship-to-ship battle. In this instance, the melee was planned; Admiral Nelson used the superior fighting qualities of his crews to offset the greater French and Spanish numbers.

Melee is occasionally used to describe disorganized groups of people and vehicle
Vehicle
A vehicle is a device that is designed or used to transport people or cargo. Most often vehicles are manufactured, such as bicycles, cars, motorcycles, trains, ships, boats, and aircraft....
s, such as mob
Crowd
A crowd is a large and definable group of people, while "the crowd" is referred to as the so-called lower orders of people in general...
s, mosh pits, and traffic jams.

It is also used in sport
Sport
A Sport is all forms of physical activity which, through casual or organised participation, aim to use, maintain or improve physical fitness and provide entertainment to participants. Sport may be competitive, where a winner or winners can be identified by objective means, and may require a degree...
. For example, the Australian Football League
Australian Football League
The Australian Football League is both the governing body and the major professional competition in the sport of Australian rules football...
has an official melee rule which is used to fine players involved in large on-field brawl
BRAWL
Brawl is a real-time card game designed by James Ernest and released in 1999 by Cheapass Games.-Gameplay:Like Spit or Icehouse, players in Brawl do not take turns, instead either making a move or staying inactive as best suits their strategy at that moment...
s, regardless of whether or not they throw punches.

"Melee" has been adopted and popularized as a term in war-gaming, board games, tabletop role-playing games and video games to encompass all close-quarter fighting and directly striking an opponent at ranges generally less than a few feet with, but not only, fists, feet, knives, rifle-butts or any other melee weapon
Mêlée weapon
A melee weapon is any weapon that does not involve a projectile — that is, both the user and target of the weapon are in contact with it simultaneously in normal use...
or special spells or tactics with the intention of causing harm.

The term was first applied to games in H.G. Wells's 1913 Little Wars
Little Wars
Little Wars is a set of rules for playing with toy soldiers, written by H. G. Wells in 1913. Its full title is Little Wars: a game for boys from twelve years of age to one hundred and fifty and for that more intelligent sort of girl who likes boys' games and books.Little Wars is considered by some...
, where the author develops a "melee rule" in his war game. It was later popularized by Dungeons and Dragons, which featured a "melee phase" to represent the fighting of characters outside of bows and magic.

This term still applies to most role-playing games, but is often used in the context of first-person shooter
First-person shooter
First-person shooter is a video game genre that centers the gameplay on gun and projectile weapon-based combat through first-person perspective; i.e., the player experiences the action through the eyes of a protagonist. Generally speaking, the first-person shooter shares common traits with other...
video games to specify a non-ranged attack. This began with the 1992 game, Wolfenstein 3D
Wolfenstein 3D
Wolfenstein 3D is a video game that is generally regarded by critics and gaming journalists as having both popularized the first-person shooter genre on the PC and created the basic archetype upon which all subsequent games of the same genre would be built. It was created by id Software and...
, which featured a knife
Knife
A knife is a cutting tool with an exposed cutting edge or blade, hand-held or otherwise, with or without a handle. Knives were used at least two-and-a-half million years ago, as evidenced by the Oldowan tools...
that could be selected from the inventory, just like a gun. Because of the risk involved in using a melee weapon, they were typically the most powerful weapons available, in terms of damage. Later, Duke Nukem 3D
Duke Nukem 3D
Duke Nukem 3D is a first-person shooter computer game developed by 3D Realms and published by GT Interactive Software. The full version was released for the PC . It is a sequel to the platform games Duke Nukem and Duke Nukem II published by Apogee...
would include a button that allowed the character to kick enemies while still wielding a gun.