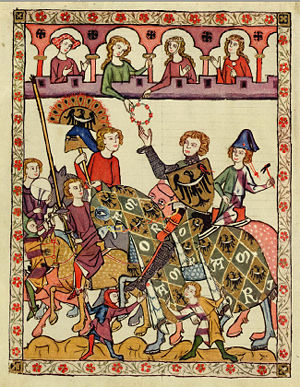 Hastilude is a generic term used in the Middle Ages
Middle Ages
The Middle Ages is a periodization of European history from the 5th century to the 15th century. The Middle Ages follows the fall of the Western Roman Empire in 476 and precedes the Early Modern Era. It is the middle period of a three-period division of Western history: Classic, Medieval and Modern...
to refer to many kinds of martial games
Combat sport
A Combat sport, also known as a Fighting sport, is a competitive contact sport where two combatants fight against each other using certain rules of engagement , typically with the aim of simulating parts of real hand to hand combat...
. The word comes from the Latin hastiludium, literally "lance game"'. By the 14th century, the term usually excluded tournaments and was used to describe the other games collectively; this seems to have coincided with the increasing preference for ritualistic and individualistic games over the traditional mêlée style.

Today, the most well-known of the hastiludes are the tournament
Tournament (medieval)
A tournament, or tourney is the name popularly given to chivalrous competitions or mock fights of the Middle Ages and Renaissance . It is one of various types of hastiludes....
, or tourney, and the joust
Jousting
Jousting is a martial game or hastilude between two knights mounted on horses and using lances, often as part of a tournament.Jousting emerged in the High Middle Ages based on the military use of the lance by heavy cavalry. The first camels tournament was staged in 1066, but jousting itself did not...
, but over the medieval period a number of other games and sports developed, which altered in popularity and rules from area to area, and from period to period. Distinction was made between the different types by contemporaries in their description, laws, prohibitions and customs.

The main types are identified below.

In contrast to the tournament, which comprised teams of large numbers ranging over large tracts of land, the joust was fought between two individuals on horseback
Horses in the Middle Ages
Horses in the Middle Ages differed in size, build and breed from the modern horse, and were, on average, smaller. They were also more central to society than their modern counterparts, being essential for war, agriculture, and transport....
, in a small, defined ground often known as the lists. The two would ride at each other from opposite ends, charging with a couched lance
Lance
A Lance is a pole weapon or spear designed to be used by a mounted warrior. The lance is longer, stout and heavier than an infantry spear, and unsuited for throwing, or for rapid thrusting. Lances did not have tips designed to intentionally break off or bend, unlike many throwing weapons of the...
. In the early fifteenth century, a barrier was introduced to keep the horses apart, to avoid collisions.

More informal jousting events would have several horsemen within the lists at once, where each waited to take up the challenge of another, although the aim remained for the joust to be a one-on-one duel.

There were several types of joust, including some regional preferences or rules. For example, in fourteenth century Germany, distinction was made between the Hohenzeuggestech, where the aim was to break the lance, and the Scharfrennen, where knights sought to unhorse their opponents. These types called for different lances (light in the former, heavy in the latter), and saddles (where the Scharfrennen called for saddles without front or rear supports, which would impede the fall).

Jousts originally developed out of the charge at the beginning of the mêlée, but by the thirteenth century had become quite distinct from the tourney. That it was seen as a separate event, with its own rules and customs, is clear from historical documents: such as Edward II of England
Edward II of England
Edward II , called Edward of Caernarfon, was King of England from 1307 until he was deposed by his wife Isabella in January 1327. He was the sixth Plantagenet king, in a line that began with the reign of Henry II...
's ban of 1309 of all forms of hastilude except the joust. By nature of its duel, and the discrete space required for the action, the joust became a popular spectator and ceremonial sport, with elaborate rituals developing around the whole event.

The term quintain (O. Fr. quintaine/quintaina, from Lat.
Latin
Latin is an Italic language originally spoken in Latium and Ancient Rome. It, along with most European languages, is a descendant of the ancient Proto-Indo-European language. Although it is considered a dead language, a number of scholars and members of the Christian clergy speak it fluently, and...
quintana, a street between the fifth and sixth maniples of a camp, where warlike exercises took place), also known as pavo (or peacock), was often used to refer collectively to a number of lance games, often used as training for jousting, where the competitor would attempt to strike an object with his lance, sword or other weapon. The common object was a shield or board on a pole (usually referred to, confusingly, as 'the quintain'), although a mannikin was sometimes used. It was not unknown for a seated armoured knight to act as the target.
This game was open to all, popular with young men of all classes. While the use of horses aided in training for the joust, the game could be played on foot, using a wooden horse or on boats (popular in 12th-century London).

As late as the 18th century running at the quintain survived in English rural districts. In one variation of the pastime the quintain was a tun
Tun
- Science and technology :* TUN/TAP, a computer network device driver* TUN , a Danish product standard for building materials* Tun , a part of the Mayan long count calendar system* A unit of time in the Mayan Long Count calendar...
filled with water, which, if the blow was a poor one, was emptied over the striker. A later form was a post with a cross-piece, from which was suspended a ring, which the horseman endeavoured to pierce with his lance while at full speed. This sport, called tilting at the ring, was very popular in England and on the continent of Europe in the 17th century and is still practised as a feature of military and equestrian sport.

The best known historic feature of the village of Offham in Kent is the Quintain, situated on the Green, a supposedly Roman invention which was popular in Elizabethan times as a means of testing the agility of horsemen.

Writing in 1798 in his History of Kent Hasted
says

“On Offham green there stands a Quntin, a thing now rarely to be met with, being a machine much used in former times by youth, as well to try their own activity as the swiftness of their horses in running at it. The cross piece of it is broad at one end, and pierced full of holes; and a bag of sand is hung at the other and swings round, on being moved with any blow.

The pastime was for the youth on horseback to run at it as fast as possible, and hit the broad part in his career with much force. He that by chance hit it not at all, was treated with loud peals of derision; and he who did hit it, made the best use of his swiftness, least he should have a sound blow on his neck from the bag of sand, which instantly swang round from the other end of the quintain. The great design of this sport was, to try the agility both of horse and man, and to break the board, which whoever did, he was accounted chief of the day’s sport.

When Q Elizabeth was at the Earl of Leicester’s, at Kenelworth Castle, among other sports for her entertainment, the running at the quintain was exhibited in the castle-yard by the country lads and lassies assembled on that day, to celebrate a rural wedding.”

The stone and plaque explaining the history of the Quintain was unveiled on Saturday, 15 September 1951 in the presence of General Sir E. Thomas Humphreys (Chairman of the Parish Council)(minutes of Offham Parish Council ), Mrs Emily Cosgrave and Colonel A. M. Wilkinson as part of the Festival of Britain celebrations. A replica quintain was used in the 1980s for tilting on horseback during the annual May Day celebrations, but this has been curtailed due to safety concerns. Responsibility for upkeep and maintenance of the Quintain now rests with the Parish Council.

The Offham Quintain is a Grade II listed monument and further details are given in the Images of England
Images of England
rightImages of England is an online photographic record of all the listed buildings in England at the date of February 2001. The archive gives access to over 323,000 colour images, each of which is matched with the item’s listed designation architectural description.This ‘snapshot’ is not an...
entry.

While frequently referred to by contemporary sources, and included (separately) in various prohibitions and declarations over the medieval period, little is known about the nature of the tupinaire. It is clearly a hastilude, or wargame, of some kind, and distinct from the other types, but there seems to be no clear description of its rules.

Not strictly a hastilude, which were essentially games, the chivalric combat had a judicial purpose, as a means of settling a criminal or treasonous charge. Fought with weapons of war, it continued until death or severe injury ended the fight, and the loser proved guilty, and, if still alive, would be executed. It is not dissimilar to the judicial duel, but was restricted to those of chivalric rank
Chivalry
Chivalry is a term related to the medieval institution of knighthood which has an aristocratic military origin of individual training and service to others. Chivalry was also the term used to refer to a group of mounted men-at-arms as well as to martial valour...
, and usually fought before a representative of the state or crown.