Lyres of Ur
Topic Home
Discussion
0 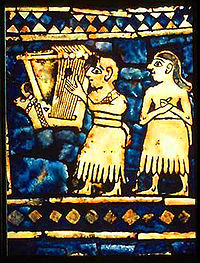 The Lyres of Ur or Harps of Ur are considered to be the worlds oldest surviving stringed instruments. In 1929, archaeologists discovered pieces of three lyre
Lyre
The lyre is a stringed musical instrument known for its use in Greek classical antiquity and later. The word comes from the Greek "λύρα" and the earliest reference to the word is the Mycenaean Greek ru-ra-ta-e, meaning "lyrists", written in Linear B syllabic script...
s and one harp
Harp
The harp is a multi-stringed instrument which has the plane of its strings positioned perpendicularly to the soundboard. Organologically, it is in the general category of chordophones and has its own sub category . All harps have a neck, resonator and strings...
in Ur
Ur
Ur was an important city-state in ancient Sumer located at the site of modern Tell el-Muqayyar in Iraq's Dhi Qar Governorate...
, located in what was Ancient Mesopotamia and is contemporary Iraq
Iraq
Iraq ; officially the Republic of Iraq is a country in Western Asia spanning most of the northwestern end of the Zagros mountain range, the eastern part of the Syrian Desert and the northern part of the Arabian Desert....
. They are over 4,500 years old.

The "Golden Lyre of Ur" or "Bull's Lyre" is the finest lyre, and was given to the National Museum of Iraq
National Museum of Iraq
The National Museum of Iraq is a museum located in Baghdad, Iraq. It contains precious relics from Mesopotamian civilization.-Foundation:...
in Baghdad. Its reconstructed wooden body was damaged due to flooding during the second Iraqi War; a replica of it is being played as part of a touring orchestra
Orchestra
An orchestra is a sizable instrumental ensemble that contains sections of string, brass, woodwind, and percussion instruments. The term orchestra derives from the Greek ορχήστρα, the name for the area in front of an ancient Greek stage reserved for the Greek chorus...
.

The "Queen's Lyre" is one of two that he found in the grave of Queen Pu-abi. It is held in the British Museum
British Museum
The British Museum is a museum of human history and culture in London. Its collections, which number more than seven million objects, are amongst the largest and most comprehensive in the world and originate from all continents, illustrating and documenting the story of human culture from its...
.